Manitoba promotion keys in on tours

It can be a difficult and unpredictable path if you are an independent wrestler, especially if you are Canadian. 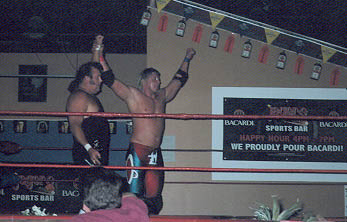 Jumping in your car and driving hours to shows across this vast country.

Dealing with a business where some people don’t care if you advance and achieve, as long as they keep profiting.

Fed up, Jay Gagne decided to make a change.

The 30-year-old wrestler created his own promotion, one that would address the real needs of up and coming wrestlers.

In existence for two years now, Independent Wrestling Manitoba (IWM) is run out of Winnipeg and is unique in that new, but serious, talent is always welcome, and they don’t have to be exclusive to the promotion’s roster.

“I was one of the wrestlers who wanted to go out and wrestle everywhere and alone in Winnipeg there’s about five or six promoters running shows,” explained Gagne, who wrestles as T.J. Bratt. “I wanted to go wrestle for all of them and the promoters said, ‘No, we want you just on our roster.’ I don’t believe in that. The ones who are going to try to make it in wrestling are going to try and make as much money as they can, while they are doing it.”

Gagne also recognized that there was a key element missing in a lot of the independent wrestlers’ training — many of them weren’t having enough opportunities to wrestle in front of crowds. This is an all too important skill where wrestlers learn to incorporate the crowd reaction into the overall story of their matches. 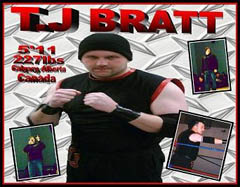 Gagne decided to return to the old days. He decided to put together tours, to take the wrestlers on the road and have the experience of wrestling for more than one night.

“To me wrestling is going on the road and going to all these little towns,” he remarked. “I decided since no one was doing them I would start with a couple of three-day tours. I did one with Kamala and I did one with Jim ‘The Anvil’ Neidhart and those went really, really well.”

The following year he teamed up with some promoters in Saskatchewan and put together a 10-day tour with The Honky Tonk Man (Wayne Farris).

For Farris the tours are mutually beneficial. For him it means getting more than one event out of a promotion when he travels and he says for the young wrestlers they are gaining invaluable experience.

“This helps the independent wrestlers because in a normal independent situation, if Jay only ran one show every three months or every six months, they would only wrestle once or twice a year over there,” observed Farris. “Now they have four or five shows in a month or during the course of a month, or every two months, so they are getting 16 to 18 times to go in front of people.”

Added Farris in his usual bluntness, “The training schools, you just go out and beat each other up once or twice a week and you learn nothing. There’s no crowd there. We need that feedback back and forth. Learning this business, it’s one of those things that are continuous. I learn in every match. Every night is different. And for a young independent kid the more they are able to get in front of a crowd, even if it’s only 25 people, even if it’s only your friends and your family, at least you are in front of a crowd and you can try things to get a reaction from them. And then you can react from their reaction.”Twenty-eight-year old Zack Mercury is another familiar face at IWM. The Manitoba native has been friends with Gagne since childhood and wrestling for five years. Standing at an impressive 6’5” he has his sights set on Ohio Valley Wrestling, where he previously trained for a week. But for now, Mercury says the tours have helped his training.

“Jay tries to book several shows in a row so it’s almost a similar schedule to say a house show schedule,” comments Mercury. “When I talk to WWE guys I find the first question that they ask is how often do you wrestle? And of course every wrestler wants to be in the ring as much as they can.”

Gagne says his goal is to be around in 10 years continuing to run a serious promotion and the tours. He’s even looking at trying to set up residences for the wrestlers so they have places to stay when they wrestle with IWM.

“I have a formula now that I’m running to do these tours and I can’t see me not doing them in 10 years because I’ve never lost money on a show,” revealed Gagne. “So I’m going to keep doing them the way I’ve doing and that’s the goal to keep the tours going.”

Concludes Farris, “Jay really has a great operation. He’s a straightforward guy who has stepped up to do something that no one else is doing. And he’s doing this all on his own time. He’s doing what I call ‘grassroots.’ He’s pounding the pavement.”