Warriors of Wrestling DVD set best left in the past

“Fasten your seatbelts,” Terry Taylor announces before an episode of Warriors of Wrestling. Taylor seems to forget that watching television does not require sitting in a car seat. It’s all downhill from there.

You need to be a living in ‘Bizarro World’ to enjoy the new Warriors of Wrestling four-disc box set. The price (under $20) is the only good aspect of the over 13 hours of supposed wrestling. 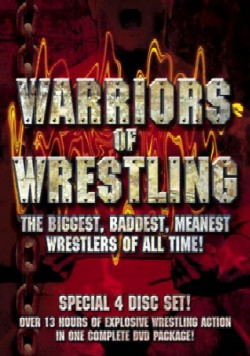 Warriors of Wrestling chronicles the whole incarnation of the old AWF organization. The American Wrestling Federation was an attempt by Sgt. Slaughter, Tito Santana and some investors in 1996 to be an alternative to the big three (WWE, WCW and ECW). But the group would die as quickly as it started.

The group was run much like ECW at the time. Television time was bought across the U.S. in hopes of running house shows and PPVs in the future. They tried to promote an old school wrestling style with a new round system, similar to boxing.

The matches would consist of three, five minute rounds. You could win at anytime, but there would be a one-minute rest period at the end of each round.

There was one big problem with the round system, however. When the crowd would see a round ending, they would be popping for a possible fall (imagine the final minute in an iron man match). Then there was a bell. The crowd’s enthusiasm was dead when the match continued.

AWF’s tapings were built much like mid-1990s WCW Saturday Night shows. The matches were taped in mass loads during the course of a day with the fans attending the shows being told who to cheer and who to jeer. Those attending consisted of non-fans, or people with no wrestling knowledge.

The shows were built around wrestlers whose careers peaked in the 1980s. Tito Santana, Bob Orton Jr., Sgt. Slaughter, Hercules, The Road Warriors (who appeared just at the promotion closed), Koko B. Ware and Greg Valentine were the top stars. The AWF did introduce some new stars. Sadly, those stars had no charisma and even less wrestling ability. Ron Powers, Konnan 2000 (Scott Putski), Tommy Gunn (Sal Sincere) and Hurricane Smith were among the names that were introduced to the fans.

When one gets this box-set, it’s easy to be excited by the 13 hours of action coming your way. But the mood is quickly killed as announcer Terry Taylor shows why he has never been given an announcing roll in the big time.

Taylor calls Tito Santana “Great, young talent.” Santana had been wrestling for 17 years at this point.

Taylor later comments that “watching the Ice Capades, doesn’t mean I can skate.”

Oh, what is Tito Santana’s flying forearm finish called? “The Burrito.” Jesse Ventura would be so proud that one of his jokes is being announced as an actual move by the AWF.

The DVDs are filled mostly with squash matches, but they do have a tag team and heavyweight title tournaments mixed in. Sadly, on the second episode, Tito Santana gives an interview with the AWF World title, thus giving away the result of the tournament that would take up the next ten episodes.

The President of the AWF, Paul Alperstein, states that the world’s top 50 wrestlers have been entered into a hopper for a possibility to enter the heavyweight title tournament. Sixteen names are drawn, including legendary (insert snicker here) wrestlers Ultimate Destroyer and Hurricane Smith.

If you hope to see a future wrestler before he made it big, you aren’t in luck. The only surprise is the introduction of “The Superfly.” No, this is not Jimmy Snuka, as most of the fans expected, but this is the future Rikishi, in between stints with the WWE.

If you appreciate the excitement of WWE or even old school wrestling, this box set is not for you. I recommend the Wrestling Gold five-disc box set. If you are a fan of Tito Santana, Sgt Slaughter or Bob Orton Jr., look for some footage of them from 10 years before the matches on this DVDs took place.

In conclusion, the Warriors of Wrestling set is only for the diehard fans who collect every wrestling DVD. Having seen over 200 wrestling DVDs myself, this is one of the worst ever produced.