Next thing you know, there might be John Cena, producer.

Coming off his successful debut album, the WWE champion is interested in expanding his hip-hop horizons to collaborate with artists that inspired his music, but have since fallen into rap oblivion.

“What I want to do is, I want to put together a nice list of those guys who I really did admire when I was growing up, listening to names like Lord Finesse,” Cena said.

“I want to get people back on records that have been out of it for a little while, that still got crazy skills that are out there. There’s a ton of people out still out there that can rip the mike and they need to be heard.”

If Cena can find the excess time to put together that endeavor, it’s safe to say it will explode onto the charts. After all, in 2005 alone, he has sold more than 200,000 copies of You Can’t See Me, a track of 17 originals by Cena & Trademarc. He made his silver screen debut opposite Kelly Carlson in The Marine, a WWE-20th Century Fox venture that should open in theaters in a few months.

Oh, and he won the WWE championship from JBL at WrestleMania XXI, a title he will defend against arch-rival Chris Jericho at SummerSlam, this Sunday, August 21, in Washington, D.C.

As he prepared to square off against Jericho for the unofficial title of WWE Musical Champion — Jericho’s real-life band is called Fozzy — Cena took a moment to explain why he can’t take a break to savor his successes. 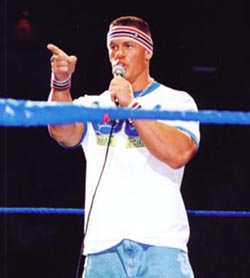 “I don’t got time, man,” he said. “It’s one of those things where I live by a very simple philosophy, just make it through today. I try to give 100 percent every single day. As long as you’re making it through the day, you’re doing good.”

In other words, the 28-year-old Boston native has no ulterior motive to use the WWE as a springboard to a starring role in other forms of entertainment. That’s a fear on the minds of fans who believe that the loss of The Rock to movies was a decided box-office blow to the federation.

“Trust me,” Cena said in an interview following the WWE press conference for SummerSlam. “I know where my heart is and my heart’s right here. I’m going to keep doing everything because I love to do it, but I will never sacrifice my time between the ropes. That’s no shot to anybody. Everybody’s got different career paths. This is mine.”

In the meantime, he joked that he has no problem coordinating his diverse activities, as long as he eliminates shut-eye from his schedule. Between wrestling, music, and acting, Cena estimated that he will be on the road for 340 days in 2005.

“When you’re going through the daily grind, you just cut eight hours you were going to get of sleep, fit everything in, and it works,” he laughed. “I’m enjoying myself now. I make the most of every day that I have and when it’s gone, I don’t worry about it.”

Cena said he has been thrilled with sales of his album, which have ranked near the sales of CDs by top hip-hop names like Missy Elliott and Fat Joe. He also predicted the music community will take a little more time to accept him because, after all, he is a white pro wrestler by trade.

“The album got released and our fan base definitely did buy it up. But, consistently, word of mouth has got out because we didn’t get heavy rotation on the radio … The album is solid and hip-hopheads are going to check it out. It’s one of those things where it is a slow process because you cater to your audience first.”

Cena’s music also differs markedly from much of today’s rap, because he deliberately chose not to lace it with profanity, tirades against women, and graphic lyrics, characteristics of today’s rap that have turned off many listeners.

In keeping it clean, Cena said he believes he is remaining true to artists like Fat Boys, whose 1987 Crushin’ was the first hip-hop album he owned.

“A lot of the artists that are coming out right now are sticking to the formula of guns, drugs, money, all that other stuff. I’m not from the ‘hood, I’ve never been arrested, I never shot anybody, I never sold drugs,” Cena emphasized

“A lot of hip-hop started as ghetto music and it was a way for people to vent their struggle. In my album, that’s exactly what I’m doing. You get to know a little bit of my life and I love hip-hop music.

Cena starred in two music videos from You Can’t See Me. The first, Bad, Bad Man, parodied The A-Team TV show of the 1980s, with Cena in the role of Col. John “Hannibal” Smith. Though tongue-in cheek, it was deemed too violent for airing, he said.

A second video, Right Now, about suburban glory, debuted on Monday Night RAW and is on BET, VH1, and MTV2.

“MTV don’t play music no more, so I don’t know if we can do that, but we’re going to really try to knock it down with this one,” Cena said. “It’s a great song, it sends a good message. It sends that message to people that you always don’t have to be a gun-totin’, mean mother … we’re all human beings.”

Well, except for inside the ring.

Eventually, Cena wants to meet Triple H face-to-face, a heady prospect for someone who has been in the WWE for only three years. “With or without a championship, everyone looks to him as the best in the business. The day I get lock horns with him, it’s going to be a special day.”

For now, though, he’s been crushin’ on diet of JBL and Jericho. In a bloody “I Quit” match earlier this year for the Smackdown brand, Cena drilled JBL with a tractor-trailer exhaust pipe and drove him through a pane of glass.

With his famed spinning WWE belt on his shoulder — at 25 pounds, “my pants would fall down” if it was around the waist — he promised to administer a similar thrashing to his opponent at SummerSlam.

“You got to do what you got to do. He busted me in the face, pushed me around, I been against all odds, a lot of people talk about what I do, but I get the job done,” he said.

And, as a parting shot, he left Fozzy’s ringleader with a hip-hop message:

I sold out, check the numbers, man
This is John Cena, rockin’ at SummerSlam
Washington D.C. You can’t see me
Like Portis with the 26, 1-2-3
You on your back, lookin’ at the lights
I’m John Cena, I came here to fight
Yeah, and when you see me
Holler at me bro’
I’ll be puttin’ Chris
In them walls of Jericho