The stories behind Funk’s book

Imagine spending 12 hours a day for an entire weekend just listening to Terry Funk tell stories about his life. Such was the “chore” for Texas writer Scott Williams in order to produce the book, Terry Funk: More Than Just Hardcore. 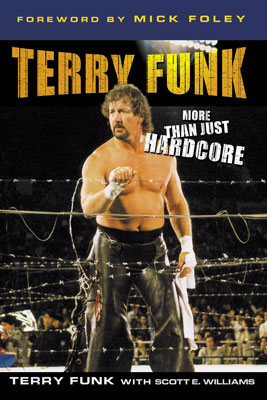 The writer and the hardcore legend are still in awe of each other’s abilities.

“Scott was great. Scott has a wonderful, wonderful mind on him,” Funk told SLAM! Wrestling. “Scott’s a writing fool, I’m telling you. He loves to write!”

As required by any biographer, a lot of the research is just trying to get the timeline straight. Funk readily admits that was his biggest weakness heading into this project.

“What’s so good about Scott is that Scott is a wrestling historian. Scott knows where I was. If I say, ‘Well, I was there in Atlanta.’ ‘What year was that?’ ‘I don’t know what year that was! But it was the third time that I wrestled Harley Race.’ He’ll say, ‘Well, that was in 1973.’ That’s what’s so great about Scott,” said Funk. “What’s also great about him, he knows all of those dates and everything. That would have taken me years to do. He loves the profession. We would go through a process. Listen, it was a process of joy and fun when I was with Scott, because he’s just a good leader. He can lead me in directions.”By day, a newspaper reporter with The Galveston County (TX) Daily News, where he covers criminal justice and writes a weekly column on pro wrestling, Williams really enjoyed the eight or nine marathon weekends with Funk.

“A lot of times, bringing up a particular match or event would remind him of something else, and we’d explore that tangent a little bit, but we always came back around to where we were headed,” recalled Williams. “Letting him go kind of free-form also meant that we had a lot of stuff that I wouldn’t have thought to ask, left to my own devices.”

Williams would head home with tapes and tapes of Funk, and transcribe it. He’d write it up, and it would go back to Funk for further reflection. “He’d send it to me, and I’d edit it. We’d decide this and that, kick it back and forth, take this out, and add that. Then we’d go on to another session,” said Funk.

Both Funk and Williams are extremely pleased with the reception the book has gotten so far.

“It’s been a very good reception,” said Funk. “It’s doing very well. It’s selling very well right now. Everybody loves it. It’s really surprised me how much women enjoy the book. They really do. I really don’t know why, but a lot of them like it and say they cry when they read it.”

Williams said he was “floored” by the response so far. “It’s just been overwhelmingly positive. The only knock I’ve heard is that it was too short, and I think people miss the boat on that, because they’re going by page count, not word count. There’s actually about 40 to 50 percent more pure material in Terry’s book than there was in Ric Flair’s, which has about 80 more pages in it. The difference is, Flair’s book had larger fonts, more spaced out lines and had big pull quotes and pictures on nearly every page.”Sports Publishing has been pleased too. “Terry’s book is not only one of the best-selling wrestling titles we’ve published at Sports Publishing, but it’s also perhaps the most well written and entertaining wrestling book we have ever done,” said Maurey Williamson, Public Relations Manager. “We give all the credit in the world to Terry and his efforts in promoting the book and making it a great success. Sports Publishing was lucky to work with a guy like Terry, who is not only a wrestling legend, but also one of the nicest and most down-to-earth authors we’ve had the pleasure to work with in recent years.”

As for another book, Williams has that covered already, with this fall’s Bill Watts’ autobiography, The Cowboy and the Cross: The Bill Watts Story: Rebellion, Wrestling, and Redemption from ECW Press, which he worked on at the same time as Funk’s book.

But the Funkster and Williams have batted around ideas for a follow-up project to do together. “I would really like to do one on West Texas State,” said Funk, feeling that what he talks about in the current book hardly does the school, both on and off the football field, justice.

Williams is game for a football book too. “It’s something he and I have talked about, and there’s no deal on it, but it is something I’ve talked to the publishers about, because I think the success of Friday Night Lights is just one example of how popular a Texas football story is. High school and college football in this state has this weird mythological status to it, and it’s something that’s always interesting to explore.”