On February 21, 2005, John Cena took one more step towards his destiny by pinning Kurt Angle, earning himself a shot at WWE Champion John “Bradshaw” Layfield and a main event slot at Wrestlemania 21 in Los Angeles. While it’s not quite meeting his bold prediction at Wrestlemania XIX that he would be main eventing Mania XX, it is still impressive for someone who three years ago wasn’t a blip on the radar.

“I tried to be Joe Namath last year and it didn’t quite work out, this year I am going about it a little different. Through all this turmoil and main eventing Wrestlemania people are overlooking the fact that I still hold the United States Championship. We could be dealing with champion vs. champion,” Cena told SLAM! Wrestling in an exclusive interview before the February 18 World of Wheels event in Calgary. 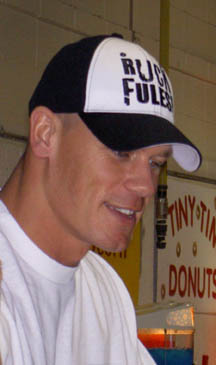 When Cena debuted, he did so with little fanfare and was quickly just another pretty-boy babyface in a crop of many fresh young faces. People perked up and took notice on the Halloween 2002 episode of Smackdown, however, when he dressed as ’90s rapper Vanilla Ice. His character quickly evolved into the rhyme-busting hip-hopper that currently rules WWE rings.

“When I first came to WWE a lot of people in my crop, the Batista’s and the Randy Orton’s, we were from the school of thought that we didn’t want to rock the boat because there was only one show in town to be working for and you don’t want to mess up or do anything wrong. So we did what we were told and shut up. After awhile the people in WWE got to know me like the people in OVW got to. If anyone watches old OVW [WWE developmental territory, Ohio Valley Wrestling] stuff, I had a lot of fun as an entertaining heel as Prototype. I did the same thing that I am doing now in a different platform, because Jim Cornette isn’t really hip-hop savvy. As people got to know me and what I was about they let me be myself and the similarities between the OVW Prototype and the modern day John Cena go hand in hand, I am just doing it in a different medium. I’m not necessarily a ‘boots and tights’ type of guy. I am like the anti-professional, I wrestle in sneakers and jeans but that’s who I am and what I believe in.”

What many don’t know about Cena is his early days, putting long hours on the road for California’s UPW promotion. Cena’s current battle cry is “The champ is here” and it’s one that is shared by a man he traveled up and down those California roads with, former ROH champion Samoa Joe.

“It has been such a long time since I have seen Samoa Joe, but he was one of the grandfathers of ‘Thuganomics.’ Way back in the early days when we started, we would stay awake on road trips by freestyling. When we weren’t on road trips we would be at his house and his mom would cook us Samoan BBQ and we would eat so much we would pass out. We would sit around outside and freestyle. There was a whole crew of us, including as heavy metal as he is Frankie Kazarian. Joe has always been a great guy and I know he has turned into a devastating force in Ring of Honor, I’ve got nothing but good things to say about him, I wouldn’t want to be on his bad side.”

Mick Foley, who has recently made appearances for Ring of Honor, has publicly stated that he wants to see Joe in the WWE, while Kazarian has left TNA and there are rumors that WWE may be interested in him as well. For Cena, having some of his old running mates in the WWE would be a pleasure.

“It would be great. Even the brief time I spent with Jesus [Aguilera] in that hardcore match, when we were at each others throats, he was one of the kids I started with. For us to meet on a big stage like that, it was something special. Whenever you have that type of bond with guys, go up and down the road on a lesser scale of grandeur — we were performing in front of 10 people in UPW. On some days we performed in front of no people and did the show anyway. It would be an honor to see those guys again and have them be part of what I feel is the best sports entertainment company in the world. I hope they can make that transition, the style in Ring of Honor and TNA are a little different. But they both work unbelievably and are sports entertainers at heart and could fit in. I hope they do come over.”

Cena, 27, is very well spoken and comes across as a humble and friendly guy. It’s different from his on air persona, something he insists isn’t a one-trick pony. “I wish I could convince the other guys, a lot of folks out there look down on me for being an entertainer first and foremost.”

The new crop of WWE superstars is breaking through, with Batista seemingly on the edge of superstardom and Cena close behind. However, fellow OVW grad Randy Orton usurped them by becoming the youngest WWE Champion of all time. For Cena, he is proud of Orton but ready to make his own mark and the competition between brands motivates him.

“There is always healthy competition between everyone on our programs. Speaking for myself there is always competition of Smackdown against RAW. People have voiced their own opinion on that but since I thrive off of healthy competition, I firmly believe that I am a member of Smackdown and we have the better show, not because RAW is of less value, it’s because I believe in myself, our superstars and the product I put fourth when I step between the ropes. It’s a challenge for me to try and outdo the other guys, I am always watching what they are doing. I was at SummerSlam to see Randy get the belt and become the youngest world champion, that was a major accomplishment. He is one of my best friends; we started in OVW and traveled together when we were both brought up to work the live event loop. To see him get his success was a gift and curse, because everyone strives to get what he got. I live by the motto ‘you don’t sweat the next man.’ You be thankful for what you got and keep hustling. Randy is a good friend of mine and I wish him nothing but the best.”

You can bet that there is nothing but the best for Cena as well, as he gets closer to achieving his dream of being WWE champion.

Jason Clevett is from Calgary, Alberta and was dressed as John Cena, complete with elaborate raps, for Halloween 2003. Sadly, he was more of a dork than a Doctor of Thuganomics…