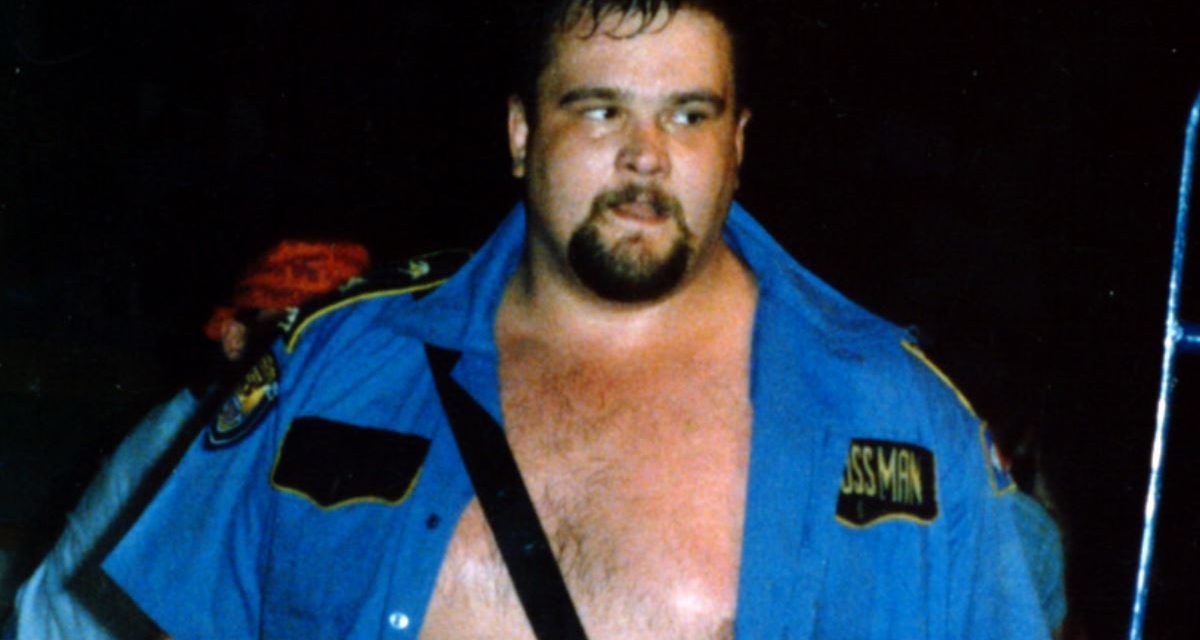 It was with a very heavy heart that I read the news about Ray “Big Boss Man” Traylor’s unfortunate passing. Only 42 years old, he left his friends, family, and fans much too soon. As a long-time admirer, it had been one of my goals to interview Ray for SLAM! Wrestling — in fact, I had recently been exchanging e-mails with him on that very subject. But even though it will never come to pass, it doesn’t mean that I can’t honour his memory by remembering some of my favourite Ray Traylor moments.

One of my favourite Boss Man moments — indeed, one of my favourite moments in wrestling, period — took place during the steel cage match he had with Hulk Hogan in 1989 on Saturday Night’s Main Event. As the Boss Man tried to escape by climbing over the top, Hogan scaled the inside wall. Reaching over, he grabbed the Boss Man by the face, pulling him back up to the top of the cage. When they finally reached the top, Hogan did the impossible by heaving the big man vertically, and delivering a huge superplex, which sent both of the 300-plus pound behemoths crashing to the mat! In a time when a chair shot was considered “hardcore”, this was the most extreme thing that many wrestling fans had ever seen. I still remember marking out at the sight, amazed that both of them could get up afterwards and finish the match. I’ve seen a lot of extreme things since, but this one still stands out as the most memorable.

Traylor had a stellar career during his initial run in the WWE between 1988 and 1995, and he had some truly classic moments both as a heel and a face.

The match he had at Wrestlemania V was one of the funniest I’ve ever seen. He was teaming with Akeem the African Dream against the Rockers. It was a complete mismatch, as the two monsters devastated their much-smaller opponents. I saw this match closed circuit in a hockey arena, and I can still hear the cringing “oooh’s” of the live crowd as we watched the Towers squash the up-and-coming tag team specialists. The sight of the Towers delivering the big “Malachi Crunch” to the Rockers still makes me laugh today.

When he ultimately turned face, the Boss Man became one of the most popular stars of the era. His feuds with The Mountie and Nailz, both of which centred around his policeman persona, are prime examples of how characters and gimmicks could be used effectively — an art that is nearly gone from the industry today.

When Traylor was in WCW, part of the fun was in seeing what gimmick they would come up with next. My favourite was the Guardian Angel, which was based on the real-life volunteer organization, famous in the U.S. for keeping the New York subway system free from gang crime. They ran a series of vignettes showing Traylor training with the real-life Angels, trying to earn his red beret, the trademark of the organization. Though the character wasn’t long-lived, the vignettes do stand out in my mind as being some of the saving graces of WCW programming at the time.

Another highlight for me was his outburst on an episode of Nitro, when he called out Glacier — who had yet to debut with the company, despite the fact that promos had been airing for the previous few months, announcing his impending arrival. In his doing so, Traylor vocalized the thoughts of all of the fans who were growing incredibly impatient with the company’s failure to live up to the hype, and frustrated with WCW’s general lack of decent product.

Traylor’s final run in WWE embodied the whole era of “Attitude”. At a time when the company was really pushing the envelope in order to lure viewers, he played a central role. His “hanging” at the hands of The Undertaker at Wrestlemania XV, the infamous “Pepper steak” incident, and the classic angle surrounding the Big Show’s dead father (complete with the casket-surfing scene) were some of the edgiest TV the company had ever put on. Only a true professional like Ray could spin such seemingly-horrible ideas into some of the most memorable moments in wrestling history (though, even as a huge fan, it’s hard to like the “Kennel from Hell” match against Al Snow).

Personally, my favourite moment from this period was the beat-down that the Boss Man gave to the stooges (Gerry Brisco, Pat Patterson and Sergeant Slaughter) at Vince McMahon’s request on an episode of Raw from November 1998. The stooges had earlier abandoned McMahon, thereby leaving him vulnerable to an attack by “Stone Cold” Steve Austin, and McMahon demanded that the Boss Man make them serve “Hard Time.” Once again, his antics made me laugh out loud when, after pummeling them senseless with his nightstick, Boss Man then proceeded to deliver more punishment to the hapless trio — with Patterson’s shoe of all things! Once again, by compounding the absurdity of the whole situation, Traylor was able to take a potentially lame segment and turn it into something hilariously entertaining.

Many people ask me why I was such a fan of the Boss Man. They say that his style was too “old-school”, that he wasn’t as flashy in the ring or as entertaining on the mic as many of his contemporaries. Well, maybe so. And maybe I can’t articulate what exactly it was that made me such a fan. All I know is that whenever he was on TV — whether verbally slamming some “punk!” in his Georgian drawl, or performing one of his patented Boss Man moves (like his quick slide under the ring, or blowing his nose on a downed opponent) — I was entertained. And to me, that’s what counts.