When Michael Shane was just 11-years-old, he knew he wanted to be a wrestling superstar. Of course his cousin, a larger-than-life wrestler by the name of Shawn Michaels, told him no, but that just made Michael Shane want to do it even more.

As most wrestling fans know, Shane’s been an NWA X champion and is a “franchise” player in the company. However, what most fans don’t know is the wrestling business almost lost out on this high-flying athlete to pro baseball.

“I was in the Quad Cities and Shawn and Marty (Jannetty) were doing a house show,” Shane told SLAM! Wrestling. “I went to see them. I told Shawn I wanted to be a wrestler and he thought I should just concentrate on baseball. He said, you’re not gonna be a wrestler.”

When Shane was just two years old, one of the first things he picked up was a baseball bat. For the next 17 years, baseball would be the focus of his life.

“Give me a ball and a bat and that was all I needed,” Shane said. 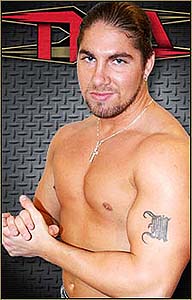 Shane also studied guitar at the age of 10 and had dreams of being a rock star. He put together a band with some friends and rehearsed in a local garage. Eventually, the band would get to play at a high school variety show. They had little time to practice and didn’t pull off a stellar performance.

Shane then made his rock star dreams a part-time hobby. In his spare time, he’d lace up his sneakers for basketball.

“I was very athletic,” he said. “It was just something to do, but I really enjoyed performing in front of people.”

Despite his desire to entertain and his athletic abilities in basketball and soccer, Shane would focus his goals on becoming a World Series ring holder.

From Little League to the Pony Leagues to the All-Star leagues, Michael Shane, AKA, Matt Bentley, was taking the baseball world by storm. He eventually went to college for a year at Muscatine College, studying liberal arts.

“I didn’t go to college to study,” he said. “I wanted to go to play baseball.”

Shane continued to play as a Short-stop except something inside of him just wasn’t sitting right. He was doing the one thing that he loved, but he just wasn’t happy any more.

The hunger for professional wrestling couldn’t be dismissed. When Michaels was running his wrestling academy (SMWA), Shane put a call in to be trained. Again, his cousin wasn’t too sure about it.

“When someone says you’re not gonna do something, you just do it,” Shane said.

Shane told his cousin he was going to be trained and to the dismay of Michaels and Shane’s uncle, Shane joined Michaels’ second class when he was almost 20 years old.

“He (Michaels) really didn’t have a problem training me. It was his dad calling my parents,” said Shane.

When Shane contacted the school, he was about 160 lbs. After gaining 15 more in a short period of time his family saw that he was serious about being a wrestler and was going to do it no matter what.

At first Shane didn’t let out to his fellow students who he really was. His uncle kept trying to discourage him and Michaels was a little harder on him then anyone else. None of it would faze Shane.

“He (Michaels) would make it extra tough on me so no one would think I get special treatment,” Shane said.

According to Shane, he would train in SMWA for 14 hours a day then go for an extra workout, eat, sleep and do it all over again the next day.

“It was fun,” he said. “We were like a fraternity. For 24 hours a day, seven days a week, we lived, breathed and slept wrestling. We loved it.”

Shane maintains that there was no major partying or drinking, just hard cardio training and serious stretching. Along with the SMWA, Michaels started the Texas Wrestling Alliance (TWA), an independent wrestling promotion that aired on Thursday nights around Texas.

It was in the TWA that Shane honed his skills. He got offers wrestling for FMW and little places around Houston and Dallas because of his TWA work. However, it would be the infamous Extreme Championship Wrestling (ECW) that would turn Michael Shane into a superstar.

“Paul Heyman’s ECW is definitely where I paid my dues,” he said. “I would fly out from San Antonio to wherever they were working. It was a 30-hour-a-week job. It was fun.”

After a brief stint with ECW, Shane went to All Japan and wrestled under a mask as Omega Verifan. Although he hated wrestling under a mask he enjoyed the Japanese wrestling culture. Most fans over there knew him as Michael Shane and when he joined up with All Japan/Zero 1’s American co-hort he dropped the mask and wrestled under his original name.

Shane also worked for MLW and Ring of Honor but his relationship with management there didn’t last long.

“Court Bauer was dumb and didn’t know what he was doing,” Shane said. “He was trying to be like Paul Heyman and he’s not.”

“RF video doesn’t distribute any of the money from their tapes to the wrestlers. They made a ‘Best of Michael Shane’ tape and I haven’t seen any money from that. I expressed my views about it in ROH.”

Eventually Shane would find himself in the promotion, he currently works for, NWA-TNA.

He had a 20-25 minute tag match with Paul London against Steve Corino and CW Anderson. It caught the attention of many promoters. He ended up having a four-minute dark match with CM Punk for NWA-TNA. Once again, he expressed his views with Bob Ryder of NWA-TNA and kept calling them every two weeks. It wouldn’t take long before NWA-TNA would think of Shane for one of their Wednesday night PPVs.

He faced Chris Sabin in a 12-minute match and TNA kept him around. Since then, he participated in — and won — the first ever Ultimate X match.

“It was fun,” he said of the Ultimate X match. “The second one could have been done better, but we were more prepared for the second one. We really didn’t know how the first one was going to turn out.”

He’s currently signed with TNA for a year until August 2004 with a second-year option. While in TNA, Shane not only has his sights set on regaining the X Championship, but he also sees a Franchise with all the gold.

“It looks like Shane (Douglas) will get to go for the World gold soon and we’ll take a shot at the tag belts,” he said.

Considering the intense feud between Shawn Michaels and Shane Douglas, it’s surprising that TNA would pair these two together. However, Michael Shane wouldn’t have it any other way. He says that he’s enjoyed learning from the 20-year veteran and would also like to fight him one day. By the looks of things, TNA fans might get to see that wish come true.

“I would like to wrestle him (Douglas),” Shane said. “I learned a lot from him. He can sit there and cut a 30-minute promo and not really know ahead what he’s talking about.”

Shane said when he won the X title, the company wanted to push him as a face. Right now Shane enjoys being the cocky young heel that gets under everyone’s skin.

“Michael Shane is one of the best heels in the business,” said Brooks of her fellow Franchise member.

Right now Shane is such a good heel, that most of the X division wants to kick his butt. Though he was one of the longest reigning X champions and really one of the only true X division bad boys, Shane was not invited to be a part of the American team for the X Cup.

“Our personalities didn’t match,” he said. “We would have clashed because I would have tried to steal the spotlight.”

HBK VS Bret Hart, Generation Next?

Recently Teddy Hart, the nephew of Bret Hart, joined NWA TNA as a member of Team Canada in the X Cup. Ever since, fans have been wondering if we’ll ever get to see Hart and Shane pick up where the Hitman and Heartbreak Kid left off.

“I think we could make a lot of money together based on what happened in the past with Shawn and Bret,” he said. “He’s (Teddy Hart’s) his own man and I respect his wrestling. I think it could make one of the companies a lot of money.”

Shane is happy with the NWA and the opportunities he’s being given which is why he has not yet signed any developmental deals that have come his way from the WWE. If Shane did end up in the WWE, he says he would love to fight Chris Jericho, Eddie Geurerro, Kurt Angle and Michaels.

Shane’s now been in wrestling for four years and when he’s done he’d like to be remembered as a guy who had passion for the business. Every Wednesday night on PPV around the world, Michael Shane has proven himself a passionate and talented worker.