Homicide’s style comes from the streets

PHILADELPHIA, PA – At first glance, independent wrestler Homicide’s appearance says one thing – street. But make no mistake, the garb and tattoos are not a gimmick, but a declaration of survival and perseverance.

“I’m an ex-gang member. I made mistakes in my life,” Homicide told SLAM! Wrestling in a rare interview. “I bring my childhood to the ring, I show my character in the ring. This is what happened in my childhood, I used to be gangbanger. This is me, I’m from Brooklyn, New York.” 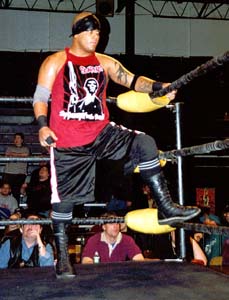 With that kind of background, it seems only appropriate he settled on the ring name ‘Homicide’, at the prompting of a friend while watching the television show America’s Most Wanted. But when you sit back and speak with Homicide, what one truly understands about the Notorious 187 of professional wrestling is that he is an athlete that found his calling and went after it with passion.

Like many of his wrestling peers, the Brooklyn native got hooked on wrestling from the television set. “I’ve been watching wrestling since I was about five years old,” he recalled. “When I turned 15, I knew I gotta do this. This is my goal, this is my life.”

Unlike many active wrestlers who will account their influences with names like Flair, Hogan, Savage, Steamboat and others, Homicide will exclaim names that are foreign to most fans in North America; Names like Giant Baba, Antonio Inoki and Mitsuhara Misawa – a fraternity of wrestling legends from the shores of Japan.

“I started watching Japanese wrestling since about 1988,” recalled Homicide. “I just got hooked up into it. I just love the style; it’s very different from the States, Germany, England and even Canada. It’s a great work of art.”

Setting forth on his pledge to become a professional grappler, Homicide was well ahead in achieving his goal, possessing an active sporting background.

“I played football and did some amateur wrestling, freestyle and Greco-Roman,” said Homicide, noting his athletic achievements would be the pedestal for his ascent into the pro wrestling world. “You definitely got to be in good shape. Not only great shape, but you got to have a great mind when you come to the ring. You could wrestle for 20 minutes, half an hour, maybe for two hours. You definitely got to be in shape if you want to become a professional wrestler.”

Having the mental toughness for the wrestling game was entrenched in his life early. “I lived in a rough neighborhood. I think I was the only person in my neighborhood out of 200 people that loved wrestling,” said Homicide.

His unwavering desire to attain his goal of becoming a professional wrestler was reached on March 5, 1993 when he made his in-ring debut. But the early years of his career were not typical.

“I never had the proper training, I just trained myself,” he said, noting that at the beginning, he was not getting work in independent promotions, as is the norm with the vast majority of rookies. “When I started, it was like in this little convenience store,” Homicide recalled of his rather unique wrestling environment. “It was so crappy, so dirty, so low down. I did this for two years.”

But fortune would shine on Homicide when he attended a wrestling clinic in New Jersey, run by none other than the Raging Bull himself, Manny Fernandez. “I met Manny Fernandez and he showed me every step, psychology, how to tell a story,” Homicide said, adding his praise and admiration for Fernandez and his old school style of wrestling.

In fact, it was during his brief tutelage under Fernandez that Homicide discovered his desire to tell stories through wrestling, an act that would defy the coming evolution of professional wrestling into dialogue driven, sports entertainment.

“I love to tell a story in my matches. It’s like making a movie, that’s how I like to deliver my matches,” explained Homicide. “I just want to wrestle. I hate doing promos, I think I suck at promos. Like Dean Malenko; no talk, just wrestle.”

As the late ’90s arrived, wrestling exploded in popularity and with it, an unprecedented time period where wrestlers could seek out high paying employment opportunities with three major promotions, the WWF(E), Ted Turner’s WCW, and east coast upstart, ECW.

For Homicide though, his anonymous sojourn continued, paying his dues and absorbing as much wrestling doctrine as he could with various indy promotions. Where others would have walked away from the life of bumps, low pay and long road trips, Homicide carried on, reaching inside to find that fighting spirit to stay focused.

“I got heart. I just wanted to make it. I feel I need to accomplish something,” he said. It would be almost 10 years after he first started that fans would begin to take notice.

In 2002, the Ring of Honor promotion came into existence, striving to establish a serious, athletically-based wrestling product. Among the early pioneers of the group would be none other than Homicide himself.

“I gotta thank Ring of Honor. That company gave me a chance,” said Homicide, telling of how bookers from the promotion were able to see through the street gangster wrestling attire. “A lot of people say that I’m a wannabe New Jack because I look like the man. But when they see the way I’ve wrestled, they say, ‘Okay, two different people, but the same character.’

What fans do in fact see is a steel-eyed wrestler who brings his Japanese wrestling influence to the ring, delivering an exciting strong-style offense, topped off by his finisher, appropriately entitled “Cop Killer,” his version of the Kudo Driver.

That drive to execute awe-inspiring matches would manifest itself into his break-out year in 2003, with matches against the likes of Christopher Daniels, CM Punk, Samoa Joe, BJ Whitmer, Trent Acid, Satoshi Kojima and others, in addition to a stand-out feud against Steve Corino, which culminated into a bloody barbed wire match finale, with Homicide coming out victorious.

There have been other accomplishments that Homicide can proudly boast about too.

Recent years have seen Homicide tour Japan with Big Japan Wrestling and more recently with Shinya Hashimoto’s Zero-One. For the kid who idolized Japanese pro wrestling, it has become a dream fulfilled. “It was awesome. It was always my goal to go over there.”

For a while, he also ran his own wrestling school, mentoring a variety of students, including indy great Low Ki. To Homicide, it seems that at times his student may have surpassed the teacher when it comes to their chosen craft. “Sometimes I need pointers myself and I’ll go to him and say, ‘Hey Low Ki, what’s wrong with this?’ We just help each other,” Homicide said, confessing that his tenure as an instructor had its own special rewards. “I think it was a blessing. I just loved watching the guys learn and hope they’ll achieve what they want, just like I did.”