I arose on April 1st expecting to be bombarded with the usual tomfoolery and jokes from those attempting to make an ‘April fool’ of another. Hence, when I logged into my email account and fixated my eyes on a subject line which read, “Total Wrestling Magazine Shuts Down!,” I figured it was a friend playing a joke.

The link inside to a news tidbit at pwinsider.com confirmed it was not a joke – just yet another unfortunate reality.

Admittedly, I was a little disappointed at first that no one at the magazine had contacted me to inform me it was curtains. After all, I had contributed as an Australian correspondent/occasional feature writer to every issue of Total Wrestling since it hit the market in September 2002, and for six months preceding the launch had written a monthly column for Power of Wrestling – Highbury Publishing House’s previous wrestling publication. 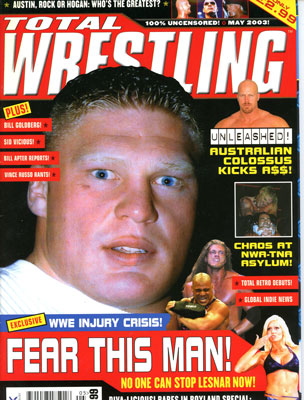 May 2003 issue of Total Wrestling, with Brock Lesnar on the cover.

But any discontent was washed away when I found out Senior Editor and all-time writing great Bill Apter received no advance notice, no previous indications that the magazine would be folding. He found out the same day the whole wrestling world did. It appears in many ways he was totally blindsided.

“Well I’m out of a job and need to find one asap to pay the bills here!” Apter told SLAM! Wrestling’s Greg Oliver. “Basically it happened today without notice. The UK office called to tell me that the magazine was not profitable. Don’t know what route to take right now.”

“I found out [the magazine was closing] through a post on the UK Fan Forum (http://www.ukff.com),” said Phil Austin, who penned a monthly “Total Defining Moment” column for the magazine, and had worked as a contributor since the days of Power of Wrestling. “Initially I was skeptical, however when I spoke to Bill online he confirmed the sad news that all was over with Total Wrestling.

“Everything came as a real shock. I had been talking to members of the Total Wrestling staff just days earlier about what to do for future issues, and had been given no indication of any problems. As far as I know even the top level Total Wrestling staff were shocked to receive the news just moments before I did!”

Chris Chisum, host of Voice of Wrestling radio show, who contributed transcripts of interviews with WWE stars on a handful of occasions to the magazine, was equally as shocked as Austin.

“I was absolutely shocked when I heard that Total Wrestling was ceasing operations,” he told SLAM! Wrestling. “I had no idea. I wish I would have known more so if there was something I could have done to help, I wouldn’t have hesitated at all.”

Although the demise of the magazine was in some ways unexpected, there were signs that perhaps everything from the publisher’s perspective wasn’t going accordingly at times.

In mid-2003, the circulation of the magazine was sliced from 40,000 to 25,000. It’s unknown whether the circulation was increased again when Total Wrestling increased distribution in North America, but the drop at the time, coupled with a 16% rise in price in the United Kingdom some months later were indicative of some struggle. Also, the first issue of Total Wrestling comprised of 100 pages. Since August 2003, no issue exceeded 84.

The future for Bill Apter at the moment is uncertain, although it has been reported he may be interested in working for the World Wrestling Entertainment.

“Bill Apter is one hell of a guy and I hear WWE isn’t hiring right now, but honestly, they need to make room for him!,” enthused Chisum. “He’s one of, if not the most respected journalist in the business today and there’s no reason why Bill should be looking for work.”

Apter was offered a role with the WWE in the 1980s, but turned it down due to his involvement with the London Press produced wrestling magazines. Now, for the first time since 1971, he’s a free agent, and becoming a part of McMahon’s enterprise is one of the potential possibilities that may or may not be presented to him in the coming weeks.

But for now, the pain of such an untimely end to yet another mainstream wrestling publication will be felt.

“I enjoyed the small part I played in the production of each issue, and being given the opportunity to put forward a positive viewpoint of each subject was a rare thing in today’s cynical wrestling society,” explained Austin.

“My hope is that another publication can come and fill the void that Total leaves. The wrestling media needs more positive journalism in it, that’s for sure.”

I find it difficult to disagree with Austin’s assessment. The tragic reality is, there probably won’t be another publication to fill the void. Since the inception of the internet, professional wrestling magazines, for the most part, have failed to generate sufficient revenue. The sad thought to ponder is, who’s next?