Jerry Tuite, better known as NWA-TNA’s Malice or WCW’s The Wall, has passed away. He would have turned 37 on December 27th.

According to reports, Tuite’s body was found unconscious in his hotel room by wrestlers Nosawa and La Parka on Friday, December 5. He was rushed to a hospital, but was unable to be revived. The official cause of death is listed as a heart attack. 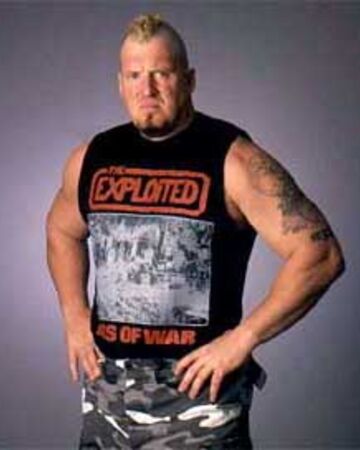 Tuite, at the time, was on a tour with All Japan, with his last match taking place last night at a pay-per-view for the company. He teamed with Justin Credible and Bull Buchanan in a victory over Nobutaka Araya, Tomoaki Honma and Kazushi Miyamoto.

The 6’10”, 320-pound Tuite will likely be best remembered for his role in WCW as The Wall. The character was introduced as a bodyguard for Berlyn, but soon branched off on his own. He would also spend time with The Revolution (headed by Shane Douglas) and the Misfits in Action (lead by General Rection, who dubbed Tuite Sgt. A-Wall). He was also involved in an angle with Three-Count, a trio of boy-band wannabes heaeded by Evan Karagious, along with current WWE Stars Shannon Moore and Shane ‘The Hurrcane’ Helms. Though Tuite never won a title in WCW, he was one of the most recognized stars in the company. Tuite’s run in WCW would be short-lived, however, as the company was sold to WWE in 2001.

Following the sale, Tuite would spend time in the indies before landing a recurring job with NWA-TNA as Malice. He received a big push in the early days of the fed, losing to NWA Champion Ken Shamrock and facing Sabu in a ladder match. His last TNA appearance was November 20, 2002 when he beat Kory Williams. Tuite received a fair amount of popularity with the fans, and would continue his independent appearances with companies like XPW and other East Coast promotions, including a run as NWA New Jersey Hardcore Champion.