CALGARY — The mood at the famous Hart House in the Calgary Thursday night was not one that people would expect. Hundreds of friends and family flocked to the Hart Home in southwest Calgary after the funeral, not so much to mourn as to pay tribute. Although they were grieving the loss of a friend, family member, and idol, at the same time they had gathered to remember the incredible 88 and half years that Stu Hart graced the earth with his presence.

The funeral itself was much the same, as instead of the numbing grief that has gripped recent funerals in the Hart Household, instead the tributes were lighthearted and reflected the man. Stu’s brother-in-law, Jock Osoler, kept his speech light. “He tried to warn me about the Smith girls (Osoler is married to Helen’s sister Diana) but I was to smitten to listen.” 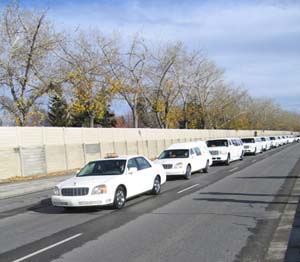 Family friend Frank Sisson spoke that Stu was always looking for talent. “He’d come down to our bar and see a guy and say ‘Want to come play around in our Dungeon?'” Those in attendance who had been in the Hart basement knew that “Playing Around” was far from the proper term.

The Premier of Alberta, the Honorable Ralph Klein also concentrated on the happy times with Stu. “When I was the Mayor of Calgary he would come down with some complaint, usually about the Boxing and Wrestling commission. It was torture, he would go on for hours, but it was better then being dragged to the Dungeon.”

Although Bret and Bruce Hart brought many close to tears with their speeches, it was mostly laughter that filled the church. At one point when Reverend Earl Klotz, who officiated the service with Reverend Ray Matheson, slipped up and accidentally called Hart “Sue.” He paused, then quipped, “It’s a good thing he’s not alive.”

Bruce’s speech covered his Father’s life, while Ross simply recited Desiderata by Max Erhmann, from the back of the Funeral Program, a poem that described Stu perfectly.

Bret Hart’s speech was made up of mostly stories about his father. Anecdotes about the assortment of run down Cadillacs as well as about his late brothers Owen and Dean brought about guffaws as many could picture in their mind poor Stu’s reaction. Amusing and touching however was Hart’s comments on his fathers’ good heart.

“A kid tripped my sister Ellie, not realizing Stu was 10 feet away. Stu jumped out of the car and grabbed the kid and gave him a hard time, and then gave him a job selling programs down at the Pavilion.” 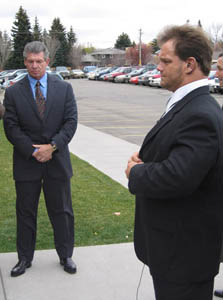 Even those who caused serious trouble, Stu had a soft spot for. “He went down to the gates because he saw one of the Cadillacs down there and thought it was Smith or someone. It was actually a kid trying to steal one of Dad’s cars,” Bret said. “So Stu took him to the Dungeon and stretched him for hours, then called the kid’s Father. The thing you have to realize about Stu is that most people would just call the police. Dad gave him a job as an usher at the Pavilion.”

An emotional Hitman concluded his speech in a touching manner. “Every night, Stu would walk down the hall and shut off the lights in the kids’ bedrooms. In unison, you would hear 12 little voices say ‘Goodnight Dad, I love you.’ The lights are out now. Goodbye Dad. I love you.”

Calgary’s Glenmore Trail was shut down after the service as nine limos and dozens of cars made the procession to the Eden Brooke Memorial Gardens in Springbank just outside of the city. There, close friends gathered with the Harts as Stu’s ashes were placed lovingly next to Helen, his wife of 53 years. They were together always in life, and remain together forever.

It is sad to think that the evening is quite likely one of the last times a large group of people will gather at the legendary home. Everywhere you looked, people were smiling and laughing. Veterans who wrestled for Stu such Bad News Allen, Tor Kamata, Mr. Hito, Dan Kroffat and many more caught up with each other and spent time with the family. For many, it is likely to be their last visit to the historic home, as it’s future at this point is up in the air.

For many, a trip to the legendary Dungeon was called for. Kids wrestled around on the mats as current Stampede stars sat with stars of the past like Steve Rivers, Steve Gillespie and current West Coast star “Black Dragon” Brett Como. In tribute to Stu, Jim “The Anvil” Niedhart counted to three, and the throng all screamed in unison, paying tribute to the oh so real screams of past victims of a “stretching.”

The kitchen was another popular stopping point, as stories were shared as they have many times before with Stu, Helen and their children. In the foyer, the Living room, and around the giant dining room table. People gathered to remember the life of the man who touched them all.

A fitting tribute for a man whose life touched so many.