“The first time I was at the house, he made me feel like I was part of the family. I’ll never forget that – the way he and Helen made me feel. They made me feel welcome, as if it was my house. I was a 17-year-old kid, nervous as hell, not wanting to eat, not wanting to drink, not wanting to use the bathroom. I was terrified,” said WWE superstar Chris Benoit in a tribute on their website. “They just made me feel so at home, and eventually I just realized, ‘This is the way they are. This is family.’ To me, it was a good introduction to this business because I really believed that all of us need to watch out for one another; all of us are family. That’s where I was introduced into the business, via Stu Hart.” 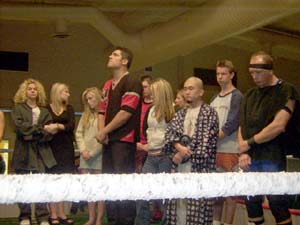 For Duke Durrango, his outstanding memory of Stu involves his unique sense of humor.

“I had three of my fingers crushed in an accident at work. I had a splint on it and we went to an autograph session and he asked me what had happened. I told him and he asked to take a look. So I pulled it off, he looked at it and squeezed it. I yelled ‘OW! STU!’ and he winked at me. That was it; he didn’t say another word.”

Jason Helton was trained by the Harts but now lives in Australia. He has a similar story.

“I was practicing one day and I got my toenail caught under my boot and lifted my big toenail off my foot. It hurt very badly. I was hopping around and Stu said ‘Let me have a look.’ I sat down and took off my boot and showed him. He was holding it in his hands and my toenail was already turning black with the blood beneath it. He didn’t say anything and grabbed my toe and squeezed my toenail with all his might. The blood went shooting out of my toe I hopped up in the air to a standing position. Tears were coming out of my eyes and Stu looked at me and said, ‘That should feel better now.’ Then he got up and left. No emotion at all. I think he was just happy that he got me to yell.”

As tributes poor in from around the world, those who knew him all agree that Stu Hart truly was a special person who touched anyone who had the honor of meeting him.

“There will never be another Stu Hart. Not a wrestling promoter or individual who was like Stu Hart. He will be dearly missed,” concluded Singh.

Those sentiments are echoed by WWE superstar Lance Storm. The Dungeon graduate spoke about Stu recently on his official website. “Stu Hart was more than just a man, he was a tradition. A tradition, a part of the history of the wrestling industry and the city of Calgary, he will be sorely missed.”

“He was a man who expected dignity and self-respect, and he died with dignity and self-respect,” Kroffat said. “The day before he died I visited him. He was sleeping when I walked into his room, and he opened his eyes and when he saw me his eyes opened wide and he lifted his left arm. He couldn’t respond, but I talked to him. In front of his bed was a chalkboard. I am lucky that I got to say everything to him, that I could tell him I loved him and thank him. I wanted to leave one last thought with him, so I wrote on the board ‘Dear Stu, I would have been proud to have been number 13.’ I would have been proud to have had him as a father. He looked at the board, he looked back at me, and he nodded his head, and then went back to sleep. I can’t begin to tell you how much that meant to me. ”

Jason Clevett lives in Calgary and has a lot of fond memories and stories about Stu himself. Although putting together this story was hard, it was also fulfilling to know Stu a bit more through these stories.