WWF’s 2001 Rebellion show worth seeking out

Though it doesn’t get the recognition it deserves in North America, partly because the WWF doesn’t air it in North America, Rebellion should be considered one of the premiere pay-per-views from the World Wrestling Federation. From the performances in the ring to the booking behind the scenes, the annual British-only broadcast really brings out the best in everyone. Maybe it is the change in atmosphere. Maybe it is because the event is a special yearly deal. Whichever the case, it is about time the WWF found a way to bring us this show in a timely manner so the angles aren’t as stale. 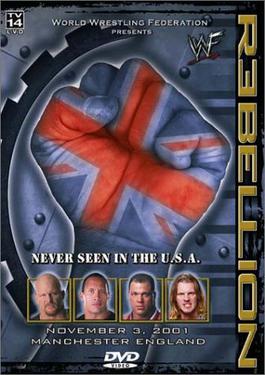 Released on DVD, video and on Viewer’s Choice pay-per-view this month in Canada, last November’s Rebellion show is one that WWF fans should really seek out. Rebellion 2001 had plenty of that…and then some. Rebellion took place with Survivor Series looming on the horizon and the doomed ‘Invasion’ angle finally and thankfully coming to a close.

In the main event, The Rock represented the WWF while Steve Austin still reigned as WWF World Heavyweight Champion and the leader of the Alliance. As we’ve come to expect any time Austin and Rock are paired up, that bout was a high-octane, high-impact tussle. However, during this go-around, the bookers (or was it the wrestlers themselves?) put in a whole slew of ‘old school’ twists and turns like Austin and The Rock knocking each other out during a mid-ring collision as well as Austin slapping on a Sleeper for several minutes. I’ll be the first one to say that I would rather not see another Austin – Rock confrontation. The matches themselves have been great contests. It is just they’ve been pitted against one another on far too many occasions. Having said that, their match at Rebellion is refreshing in the sense that it was fun to see those ‘old school’ moves being dusted off and utilized once again.

If you ignore the clumsy Divas tag match and Diamond Dallas Page being bounced around the ring by The Big Show for three or four minutes, the rest of the Rebellion card is comprised of astoundingly good wrestling. I wish I had seen the Chris Jericho and Kurt Angle match before compiling our Year End poll as I would’ve certainly included it as a Match Of The Year candidate. Yep. It is that darn good. Though it was significantly shorter, the Tajiri and Regal clash is just as intricately worked. Once again, Regal cuts a riotous promo on his hometown crowd and anyone wondering what a “stiff” match is all about should check out Regal’s chest after the match. It is not a pretty sight but it just goes to show you how far some wrestlers are willing to go at times to make what they do look and sound so real.

Rounded out by a Steel Cage Match between Edge and Christian that has a very unique conclusion, a wild Tag Team Elimination Match with The APA versus The Hardy Boys versus The Dudley Boys and a surprisingly crisp bout between Scotty 2 Hotty and The Hurricane, Rebellion is a especially those who appreciate textbook technical wrestling and complex ring psychology.

The extras on the DVD version include: