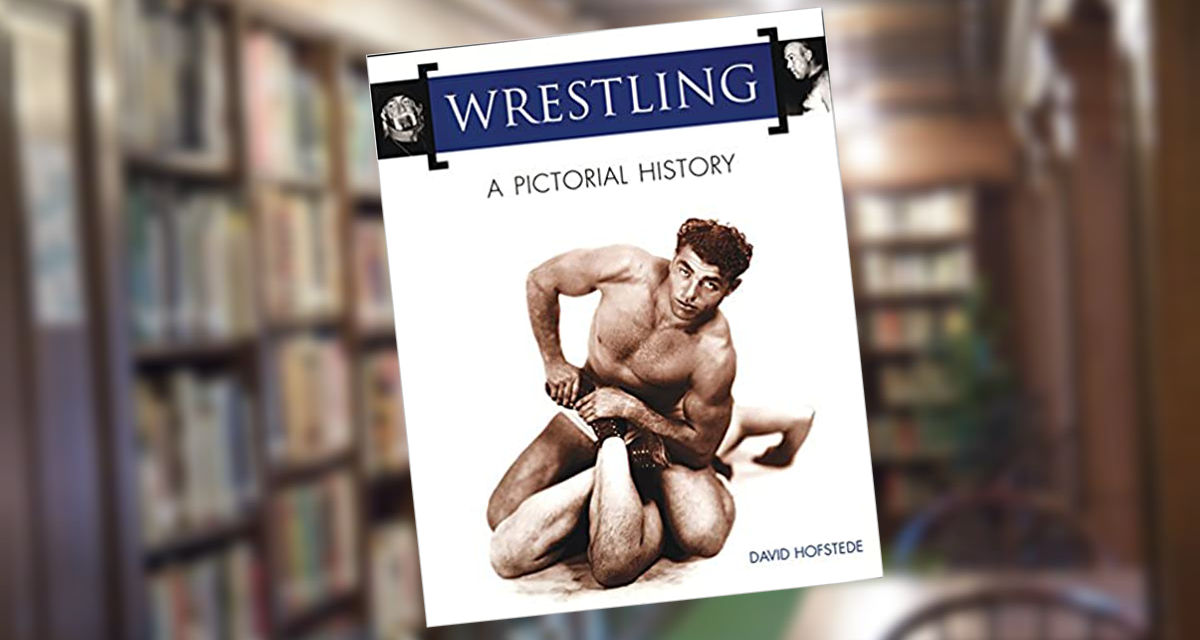 A book worthy of close examination has arrived from ECW Press in Toronto. No, the remnants of Extreme Championship Wrestling have not gone into the publishing dodge. These ECW types (the acronym derives from an old literary journal, Essays on Canadian Writing) have a fine reputation for publishing scholarly books, biographies, fiction and poetry, in addition to an occasional book about sports.

The entry at hand is among the first Sports/Entertainment titles they have produced. And, of all the professional wrestling books I’ve ever seen, going back to turn-of-the-20th Century biographies of Frank Gotch and Martin (Farmer) Burns, this one rates high in terms of lush content.

The title is Wrestling: A Pictorial History and the man responsible for this quality 150-pager is David Hofstede.

Not that all of it’s high quality, in all shades of that phrase’s meaning. The occasional factual errors are disconcerting – but those, for the most part, are pet peeves to me and others who know better; the average fan, especially the younger set, will barely notice . . . Although some might wonder why Wahoo McDaniel is identified as a five-time NWA heavyweight champion. I think the author meant to include “Mid-Atlantic” in there somewhere.

Likewise, readers could wonder about inconsistencies in the captions, or why it is assumed Ox Baker will be recognizable when identified only as “Ox” and why a picture of Gorgeous George Grant, circa 1975, is dropped, erroneously, into a section devoted to George Wagner, the original “Gorgeous George.”

(Oh, and some of the more grizzled ringsiders will be amazed to see Gino Garibaldi identified as “Killer” Kowalski, they will wonder who the “Man Mountain Dean” pictured is – it is NOT Dean – and they’ll be confused about the description under a Hard Boiled Haggerty photo – the description fits the last of three well-known HB Haggertys, Don Stansauk – but it is not Stansauk who is pictured.)

Again, whether I am mostly niggling, or whether the reader will be upset at the many erroneous captions, well, that’s likely to be an individual decision. Believe me, though, that the majority of the photographs – reproduced in black and white on slick paper – are the price of admission here. From the cover alone (a young Jumping Joe Savoldi, circa early ’30s, astraddle a pretzeled, unidentified foe) one can be sure that this is a book for wrestling (okay, and “sports entertainment”) buffs.

Hofstede, in fact, insists that his pictorial collection connects “the past and present in professional wrestling.” And he goes out of his way to remind today’s fans that there was a “Nature Boy” before Ric Flair. (Alas, the legion of Buddy Rogers fans will be stung, perhaps even irate, when they see their “original” Nature Boy’s presence reduced to one, hardly inspiring image. Hardly the sort of treatment a true wrestling icon deserves.)

Still, Hofstede may rightly claim that the book is “a celebration of what has gone before, what’s happening now, and what will surely be more exciting in times to come.”

To help us sort out the principals in the hippodrome game’s history, the contents are divided into chapters like THE CHAMPIONS, THE HEELS, THE PIONEERS, THE TAG TEAMS, THE COWBOYS, THE INDIANS, THE LADIES, THE REAL DEALS, THE IMMORTALS (Lou Thesz, Gorgeous George, Ric Flair and Hulk Hogan are accorded this billing, each with his own section), THE LOUDMOUTHS, THE HEROES, THE MASKED MEN, THE BRAWLERS, THE BODYBUILDERS, THE JOURNEYMEN, THE INVADERS, THE HEARTTHROBS, THE SUPERHEAVYWEIGHTS, THE COUPLES, THE TWO-SPORT STARS, THE ODDITIES, THE GREAT MATCHES, THE FANCY DRESSERS, THE HIGH FLIERS and THE GLAMOUR GIRLS.

But for one called THE MIDGETS, all the bases would be covered.

For those who are old enough to remember the first-named of the following pairs, the juxtaposition of photographs, side by side on facing pages, is fascinating: Mildred Burke … and Rena Mero; Primo Carnera … and Kane; (the ersatz) Man Mountain Dean … and Andre the Giant; Sandor Szabo … and Dennis Rodman; Earl Caddock … and The Rock; Bobo Brazil … and Chyna, etc.

Mike Chapman’s International Wrestling Institute and Museum in Newton, Iowa, lent some vintage shots of Frank Gotch to the effort, and upwards of 25 other images of the “oldtimers,” including the startlingly handsome image of Savoldi for the cover. The remainder come mostly from stock photo archivists, such as Globe Photos, PhotoFest, etc.

Hofstede, true to the current image of the game, has inserted a fair sampling of raw cheesecake (scantily clad femmes like the former Mrs. Dustin Runnels; the former Mrs. Randy Poffo — this is Miss Elizabeth at a time when she would have prompted a bulldog to break his chain — and yet another Randy Savage girlfriend, also not to be confused with the original Gorgeous George).

Notable ring battles are represented by Ali vs. Inoki, Hogan vs. Andre the Giant, Stanislaus Zbyszko vs. Strangler Lewis and Gotch vs. Hackenschmidt. And, although their pictures reside under the chapter heading LADIES, little known female wrestlers of the early ’50s like Ella Phillips, Jean Kennedy and Ann Stanley would be better categorized as FEMALE JOBBERS. If I could ask Hofstede one question, it would be as to why their pictures are included in a book almost completely dominated by wrestling main eventers.

This is an attempt at a serious pix book and, until one is distracted by the careless errors (no editor is listed), it can be said to succeed. Hofstede, a couple of years ago, churned out Slammin’: Wrestling’s Greatest Heroes and Villains, also from ECW Press, but which was a straightforward collection of biographical pieces devoted to present-day ring stars. A potpourri of lists and title histories rounded out that effort, which easily could be construed as an updated version of 1984’s Wrestling: The Good, The Bad and The Ugly, authored by the hyper-prolific Bert Randolph Sugar and George Napolitano. Okay, but decidedly a long way below the historical stature of Hofstede’s latest.

On balance, one would dearly like to give Hofstede a passing mark. The idea was good, though the execution might have involved someone with a passing knowledge of wrestling history. If one limits the critique to the quality of the photos, alone, Hofstede acquits himself as a man with a good eye for composition.

If only he had not tried to write the captions, too.