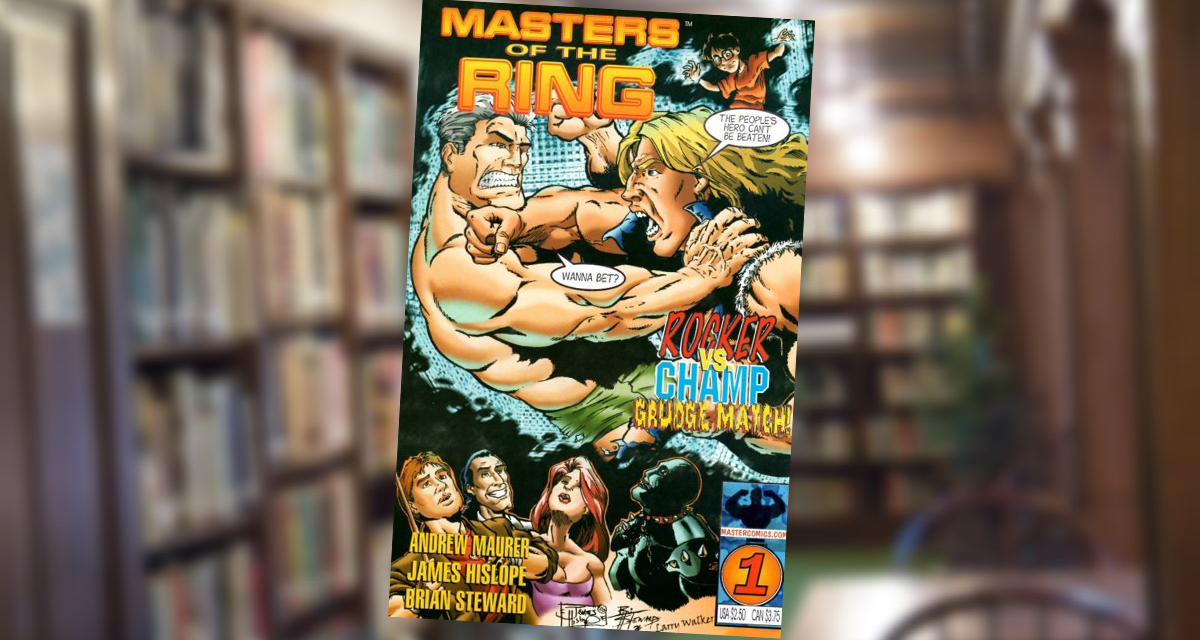 When I first picked up the first issue of Masters of the Ring, I wasn’t entirely sure what to expect. I’d never heard of the brand Master Comics, so the name did not inspire the immediate and unwavering confidence of a Marvel or a DC. Still, the cover art was proficient and in some ways reminiscent of some of Dark Horse’s earlier publications.

Inside, the comic was closer to what I expected. The art is black and white, but penciled proficiently by Master Comics artist James Hislope. I’d even go so far to call Brian Steward’s layout of the comic impressive, but I do miss the rich colour that tempted me on the cover, making it seem more absent within the pages.

Masters of the Ring follows two stories that become intertwined as the comic progresses. The first story is that of the fictitious NAW, a bustling and successful independent wrestling federation. The second is that of Ruban, a young orphan with a strange yet somehow appropriate power. He seems to have the ability to control outcomes simply by wishing for them, or more specifically, by typing them up as ‘”news” on his web page. As you might guess, his web page is a wrestling site, and that’s how his story connects with that of NAW.

In the first issue, Ruban causes a lowly jobber, ironically named Champ, to defeat John J. Rocker and win NAW’s prestigious heavyweight title. But when Ruban finally gets the chance to meet Champ, the newly-crowned champion lets his ego get the best of him and berates the poor boy. Ruban is none too happy, and he uses his powers to take action.

Aside from the comic itself, Masters of the Ring also features interviews with indy wrestling stars, starting in the first issue with northeastern-based wrestler Donnie B of the NWA.

Masters of the Ring is different from what I’m used to from comics. Much like the independent wrestling organizations it hopes to represent through its fiction, the comic has potential, but lacks the slick look of the industry’s major players. Though perhaps necessary for start-up comics, this is somewhat appropriate. Notes writer/publisher Andrew Maurer, “We feel the key is the indy wrestling scene. The Indies need an avenue to show their wares.”

True as that may be, there’s a reason that independent wrestling federations are independent — they generally lack the money, talent, and know-how to go national. This is a huge obstacle. All of this is to say that indy wrestling organizations are likely not indy by choice, but by necessity. Still, Maurer is not simply offering his comic as a platform for indy support out of the goodness of his heart. “Now that the WWF controls WCW and ECW, the market is now more open for small market competition,” he remarked to SLAM! Wrestling. Apparently, that includes competition from small market comics.

One remarkable aspect of Masters of the Ring is that the comic completely obeys kayfabe. “We work in our books as if wrestling is real,” explained Maurer. “There is no such thing as kayfabe. The WWF has produced some successful comic book series. These comics were based on their characters in non-wrestling or limited wrestling situations. We wanted to create a comic where the characters interact in a wrestling environment.”

That’s exactly what they’ve done. I can’t help but wonder, though, if the same hip, smart internet crowd that follows wrestling beyond the arenas and the television shows will also follow it to a comic that portrays wrestling as real. “We just want to tell a good story. Long term, we would like to get as many indy promotions involved in this project as possible. We have even heard from an entire federation of hardcore midget wrestlers,” said Maurer. Hardcore midget wrestlers — now that sounds like a winning comic formula.

Masters of the Ring, despite its infancy, isn’t a bad read. I’m actually curious enough to read more, and find out what happens to young Ruban and the wrestlers he manipulates. If the comic succeeds, maybe they’ll be able to make me happy and offer it in full colour. Until then, those curious enough to try it can ask for it at your local comic retailer.