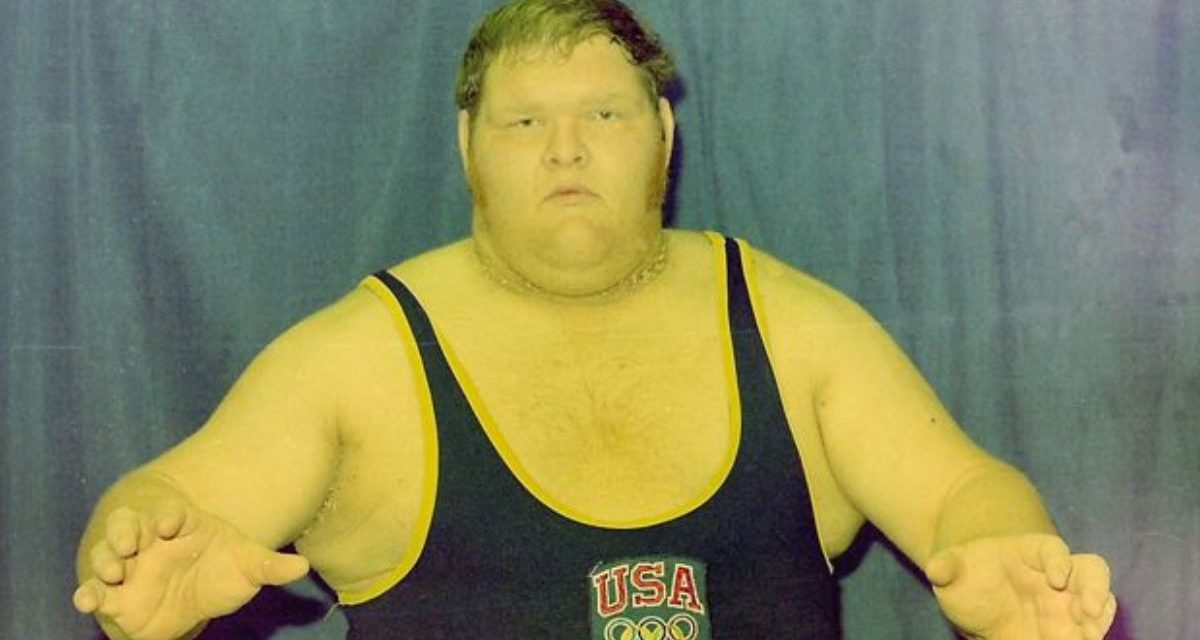 Chris Taylor was the biggest Olympian ever in 1972, competing in freestyle wrestling in Munich, Germany at a whopping 412 pounds.

Coming out of the Olympics with a bronze medal, he seemed a natural fit for pro wrestling and hooked up with another former Olympian, Verne Gagne, for training. It was a remarkable contract at the time, in excess of $100,000.

But it wasn’t to be for Taylor, who had numerous health problems and died in 1979 at age 29. 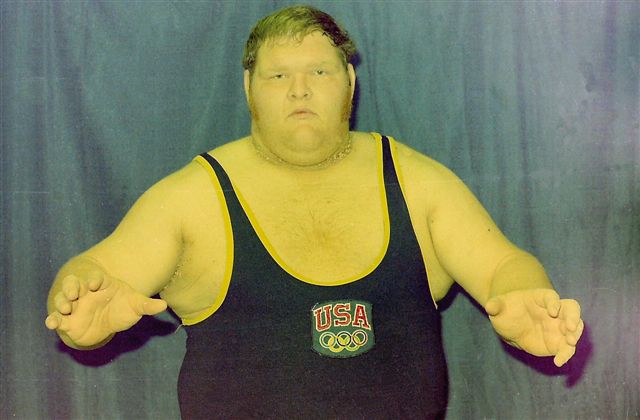 Taylor was from Dowagiac, Michigan, and really first made a name for himself as an amateur at Iowa State University, after two years at a junior college. At ISU, he became a crowd favourite, going undefeated and winning two national titles, and being named All American twice.

Dot Curtis did the pairing and scoring for many of Taylor’s amateur matches, and her husband Don refereed some of his bouts.

“He was a very capable athlete. Once he got you down, it was hard to ever recover. For someone as big as he was, he made some awesome takedowns,” Dot Curtis said.

One match in particular stood out in her memory. “He took an opponent down with a suplex and the whole crowd just gasped in amazement at the throw, and then at the thundering sound when his opponent his the mat, flat on his back. PIN!”

He seemed destined to win gold at the Olympic Games in Munich.

Two of his bouts at the Games stand out and help explain how the behemoth ended up on with a bronze medal in freestyle.

In only the first round of freestyle, Taylor took on two-time gold medalist Aleksandr Medved of Minsk, Ukraine. Medved had beated Taylor at three other meets, but on this occasion, they fought to a draw. The 231-pound Medved was awarded a controversial decision by referee Umit Demirag of Turkey, who had penalized Taylor for passivity. It was the last time Demirag refereed an Olympic bout, as the ruling body dismissed him from his position, yet allowed the Medved-Taylor decision to stand. Both men won the rest of their bouts, with the Ukrainian taking gold.

In Greco-Roman, Taylor faced off against Wilfried Dietrich, a West German wrestler whom he had beaten in freestyle. Gagne recalled that Dietrich had a strategy where he kept trying to push Taylor out of the ring. Then Taylor got riled up and rushed Dietrich, who grabbed him up in a bear hug and suplexed the 412-pound monster and “turned him on his back before he hit the mat and that was it. It was a phenomenal move.”

Gagne explained some of the difficulties that amateur wrestlers go through when becoming pro wrestlers. “You’ve got a ring for pro wrestling and you don’t have a ring when you are wrestling amateur. You’ve got a mat on the floor and a point system. You don’t have that anymore [in pro], so there’s a lot of stuff that you have to learn. A lot of things that you have to learn, and some things to forget about — don’t worry about a takedown, you won’t lose two points; and don’t worry about near pin because there isn’t any near pins. Either you get pinned or you don’t get pinned.”

Billy Robinson and Gagne taught Taylor in late 1973, after Taylor had finished at Iowa State. Gagne said that Taylor was at their training facility “for quite some time.”

“He picked up on it pretty good,” Gagne said. “He went up to Oregon and he got sick up there. He got sick while he was here and had to lay off for a while.”

As a pro, he made his debut in early 1974, usually wrestling AWA prelim wrestlers like Rene Goulet, Moose Morowski, and Bob Remus (Slaughter). He often used a bear hug to win his matches. There was an attempt in 1974 to team him with fellow Olympian Ken Patera, but the team had no chemistry and did not last.

Taylor’s first pro match was against Rene Goulet. A photo from their match ended up in the March 11, 1974 issue of People Magazine.

In an interview with the DDT Digest web site, Goulet recalled a Taylor story:

“I’ll tell you a story about Chris Taylor. He’d just gotten out of the Olympics, and he was a big guy, like over 400 pounds, and, as a result, his pro wrestling matches wouldn’t go very long. They would be like thirty or forty seconds…maybe two minutes.

Anyway, this battle royal with Chris Taylor was on ABC’s Wide World of Sports.  [starts chuckling]  I remember this because I was in the battle royal, too. The last two guys in it were Mad Dog Vachon and Chris Taylor. And, Mad Dog Vachon, you know, he was tough. Not the biggest man in the world but, boy, was he a tough son of a gun. Plus, he could wrestle…he went to the Olympics, the Empire Games,  He was unbelievable.

The giant never really made it to main event status, and had trouble getting over, in part because he would admit that the pro game was fake. He peaked in the AWA as a semi-main eventer, taking on the likes of Buddy Wolff, Larry Heiniemi, Superstar Graham, Baron von Raschke, and Horst Hoffman.

Taylor’s move to pro wrestling did attract mainstream media attention, which was rare at the time. One of his bouts against Mad Dog Vachon was aired on ABC’s Wide World of Sports.

Among the problems Taylor faced were hepatitis and phlebitis, which coupled with the massive weight that he carried around on his 6-foot-5-inch frame, made life difficult.

Mike Soma was a wrestler named Ravishing Race Bannon in the late ’70s, and worked once with Taylor in a handicap match. “It was myself and a guy named Tom DeMarco,” he recalled. “Chris was about 480 or 500 pounds at the time and he was not moving well his bulk made it hard for him to move and he would not work long matches because he did not have the stamina to go long. But a man his size was suppose to end a match quickly.”

“I called his parents and said, ‘I imagine that you are pretty shocked at Chris’s early demise here at 29 years old,'” remembered Gagne. “I talked to his mother, and she said, ‘Well, we’re just grateful we had Chris around that long. He had a lot of problems.”