The Maestro: In search of another stage

The Big BossMan never walked a beat in his life. The Undertaker’s greatest “supernatural power” is his ability to make himself disappear into thin air after a house show. The Artist doesn’t have a record contract and the only thing the Acolytes really protect is their spot in the company. 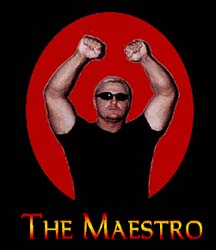 In the star-studded world of pro-wrestling fans grasp the fact that just like actors in motion picture films, wrestlers play fictitious roles supplied to them by bookers. Though lately things have opened up somewhat, very few wrestlers have the opportunity to build their gimmicks around their own personal interests and backgrounds. In that way, Robert Kellum’s transformation into the snobbish and devilish Maestro was unique.

When Randy Savage gave the name “Gorgeous George” to his girlfriend, Kellum — who was wrestling under that persona as a tribute to his Great Uncle — was left high and dry in World Championship Wrestling. Legitimately upset that the switch had occurred without his permission or knowledge, Kellum demanded a meeting with then WCW Vice-President, Eric Bischoff. Through their discussions, The Maestro was born. Kellum convinced Bischoff to allow him to draw from his life-long interest in the arts to invent an extravagant heel. Kellum was so sincere about developing his creation that the classically-trained pianist insisted really playing the piano during promos with his valet Symphony — who he says was a “happy-go-lucky” personality that always made him laugh.

“I created the character and he was originally supposed to be a Phantom Of The Opera-type thing,” Kellum told SLAM! Wrestling. The plan was for The Maestro to lurk in the rafters and dark passages and cause general havoc for many of WCW’s wrestlers. According to Kellum, he fleshed out the persona submitting many elaborate scenarios to the various WCW booking committees. His ideas were either ignored or given to other wrestlers. Because of that, his feuds with Ernest Miller and Buff Bagwell never really got the attention or depth he felt they deserved.

“It was crazy. Every booker that came in really didn’t want to do much with me,” commented Kellum, expressing his profound disappointment. “I had to deal with a lot of politics and a lot of cliques that I wasn’t included in. That’s what I was up against. I did everything the best I could to show them I had talent and I became quite miserable.”

With the very public departure of his close friends — The Radicals — to the WWF, Kellum was left to fend for himself. Remarkably, five years ago, Chris Benoit and Kellum tried out for the WWF together in dark matches. The federation didn’t show much interest in either man at the time which is startling in light of The Canadian Crippler’s current push in the WWF and Kellum’s impressive credentials. Kellum started his career as a collegiate wrestler. He then built on that foundation training with veterans Nelson Royal, Gene Anderson and Ivan Koloff in North Carolina.

“I have so much respect for those guys as they taught me so much about the business, what to look out for and what to work on. It was a big honour to be trained by those guys,” spoke Kellum of his teachers.

Kellum also learned the art of submission wrestling with the UWFI group training with such heavy-hitters as Ken Shamrock and Dan Severn. The knowledge he gained there improved his skills greatly. Kellum grappled in Smoky Mountain Wrestling as Robby Eagle and worked in Mexico for a short time as well with Jake “The Snake” Roberts. The experience south of the border really knocked Kellum for a loop.

“The first thing I asked Jake was…Am I going to have to do all this flying around and crap? I am not an acrobat. I’m a wrestler. And Jake said…Do you honestly think I can do a hurracanrana?”

Kellum’s travels also brought him to Canada where he worked with Edge and Christian in the eastern part of the country. His most memorable moment was an incident involving the late Owen Hart and King Kong Bundy. All three were traveling on the road together one rainy night. Kellum pulled over to drop Bundy at his hotel. As The Walking Condominium was taking his luggage out of the back of the van, Hart turned around suddenly and told Kellum to “floor it”. Unaware that Bundy hadn’t finished retrieving his belongings, Kellum did just that. The speed at which Kellum took off threw Bundy’s luggage all over the parking lot ticking off the Big Man.

“You can imagine this 500-pound man chasing after us, cussing us out,” chuckled Kellum. “Owen was in the passenger side laughing his butt off. It was so funny! Owen was a great guy and a good friend.”

A personal request by superstar Randy Savage brought Kellum to the “big leagues” — World Championship Wrestling. Though his stay there was short and tumultuous causing him to ask for his release earlier this month, Kellum was glad to have made the acquaintance of those wrestlers who were as mindful of the history and tradition of professional wrestling as he is. One conversion Kellum recalls vividly is his chat with perhaps the greatest wrestler of any time: “The Nature Boy” Ric Flair. Kellum was down about the state of the modern wrestling in which cutting a promo or a few dance steps means more to some fans than actual in-ring ability.

“Flair told me that wrestling goes in trends. It has its peaks and valleys. And, that it was always up to the technical wrestlers like us to keep the die-hard fans interested once the valley stage hits and the casual fans flock away from the scene,” remembered Kellum.

Since his exit from WCW, Kellum finds himself entertaining offers from other promotions and once again exploring his roots, his love of the written word and music.

“I like poetry. I am a writer too,” Kellum stated proudly. “I have a huge creative outlet more or less. It keeps me from being bored.”

He stands firmly by the decision he made to pack up and leave World Championship Wrestling behind. Wherever he ends up, Kellum is confident that the bold move was the right one.

“There comes a time when you’ve got to make a stand or you can’t live with yourself,” he said.