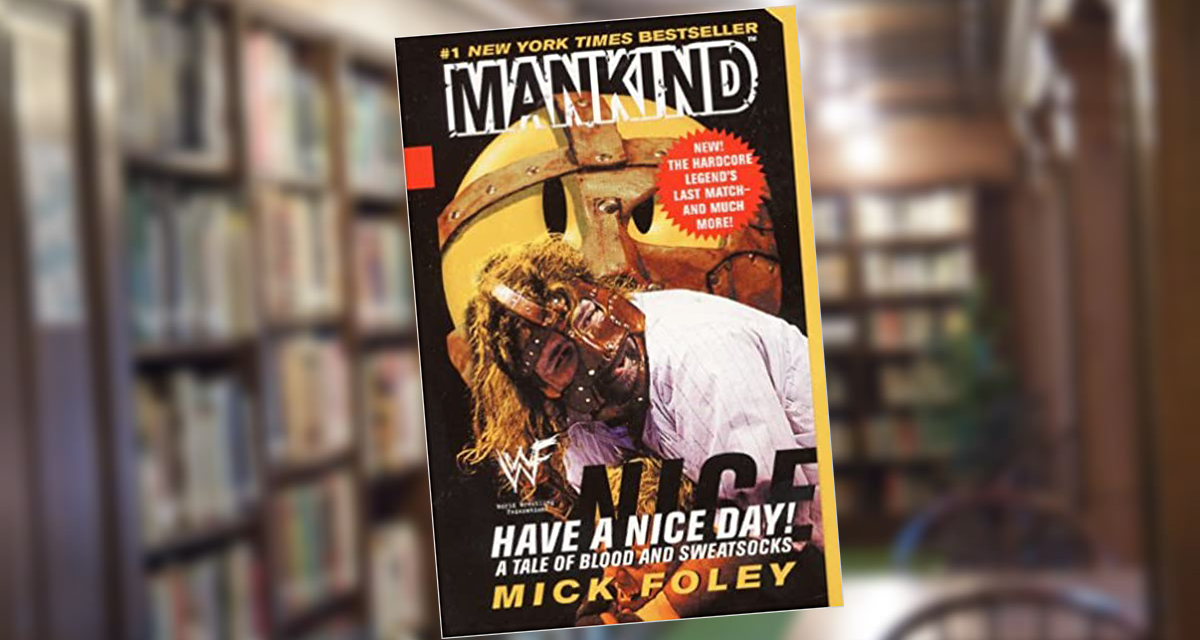 When it was announced earlier this year that Harper Collins was releasing a series of biographies on the top WWE stars, I expected the usual-100 or so page trade paperbacks, mostly pictures, the kind of one-print wonders that come packaged in their own cardboard display ready to be placed right by the register next to the TV guide and the new edition of Dianetics.

Mick Foley’s autobiography, Have a Nice Day! A Tale of Blood and Sweatsocks, is a 500-page monster that could easily be used as a weapon in a hardcore match. Even more impressive is the fact that Foley wrote the book himself. More specifically, he wrote it by hand on yellow legal pads, and it was transcribed by the editors. (I for one would love to see that original manuscript – maybe a special edition?)

So how good is Foley at being a writer? He’s as funny as he is during his best interviews, as frightening as that drop from the cell, and as riveting as a Double-Arm DDT. His life is so up and down it’s hard to believe this is a non-fiction book. And he tells the stories expertly, with a heart and a wit that keep you reading, and makes you laugh even while he’s laying on the ground coughing up blood. Because no matter how much it hurts, the show must go on.

He starts off with losing an ear in Germany, where the nurse, while throwing away the remains of the auditory extremity, asks him “Isn’t wrestling fake?” This is what’s know in the writing biz as a good opener. But considering that Foley is such a good storyteller in the ring, it’s not too surprising he’s a good one outside the ring.

We rewind to his childhood, his early wrestling days, and the infamous Dude Love home movie. (Along the way he takes the opportunity to clear up a few legends that have sprung up around him. He didn’t actually mess himself when he did that drop off the garage roof – that was stage blood that spilled on his pants after the first take got botched up). He takes us along his whole journey; the peanut butter sandwiches in the back of his Fairmont as he waits for Dominic DeNucci’s training school to open, the first matches in Memphis and Texas, and more up the road to his eventual fame and infamy as the hardcore icon.

Every injury is related in bone-jarring detail. Every happy moment as well. He’s made a lot of friends in the industry, and lost a few. The book is dedicated to Owen Hart and WCW ref Brian Hildebrand, longtime friend and partner of Foley’s who died of cancer earlier this year.

He pulls no punches in the book. He speaks his mind on the people he’s met in the industry, the good and the bad. People like Troy Martin (AKA “The Franchise” Shane Douglas, who trained with Foley at DeNucci’s school) are spoken of with affection, though he admits his career choices and habit of burning bridges has been “questionable.”  Ric Flair is praised as a great wrestler but pummeled as a terrible booker. And poor Al Snow is savaged countless times (Foley once refers to going to the restroom as “Taking a Snow”) though he starts the book making it clear that it’s all in fun.

Plenty of photos too. Not just the nice modern posed stuff, we see shots of his family, including his dad, the original Cactus Jack. Seeing Douglas and Hildebrand from the ’80s is worth a laugh too. And yes, there’s blood; a colour section in the centre features some gory stuff, including the famous ear shot that Foley used to sell autographed copies of at conventions.