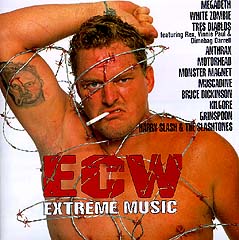 ECW has always prided itself on being the “Rebel Promotion” and doing things drastically differently than the big two and their first foray into the crossover market of music related paraphernalia is no exception. While the majority of past wrestling releases have involved little effort save compiling a bunch of ring-entrances and bad promo pictures, ECW’s CD actually promotes artists and their songs as the ring-music, a habit which has existed since ECW’s beginning and continues to this day.

Of course due to legal factors a number of wrestlers have different artists covering their music or new music altogether, (I mean didn’t Bam Bam use Guns N Roses “Welcome to the Jungle” before his departure?) but the results are excellent nonetheless. Harry Slash and the Slashtones open the proceedings with the metal derived ECW theme song: “This is Extreme” which nearly brings me to tears every time I hear it, thinking of all the ECW television and PPV’s we in Canada miss.

Next is White Zombie’s “El Phantasmo and the Chicken Run Blast-O-Rama” (Wine, Women and Song-remix) which has been used throughout ECW for years and has finally become Lance Storm’s official music. This remix is of course more techno/industrial oriented than the Astro-creep 2000 version, but is heavy and a strong contribution.

As far as covers go, the listener gets their first taste of many to come in the form of Kilgore covering Pantera’s “Walk”, for “the Whole F’N show” Rob Van Dam. Kilgore do an almost note for note version and stray little from the original. Still the heaviest theme in the ECW today, at least as long as RVD stays. Other covers include Grimspoon doing Prong’s “Snap Your Fingers, Snap Your Neck” for Justin Credible, which comes across as less powerful than Prong’s version, mainly due to the singer’s whining of the verse instead of emulating Tommy Victor’s harsh singing, but in a live setting the difference is negligible.

Motorhead and Anthrax also get in on the cover game by doing Metallica’s “Enter Sandman” and “Phantom Lord” for the Sandman (obviously) and Mike Awesome respectively. Both are true renditions with the biggest differences being in the vocals, especially with Lemmy’s screaming. Sadly the Sandman is long departed meaning we’ll never hear thousands in the ECW arena crooning along with that soulful Lemmy, damn.

The only other original on Extreme music besides Harry Slash and the Slashtones second contribution “Huka Blues” (Sabu’s new theme which is very groove oriented with slight Middle-Eastern and metal themes prevailing), is Megadeth’s instrumental version of “Trust” for dynamic Jerry Lynn. While heavy and drenched in the prog-metal stylings we’ve come to expect from Megadeth, it isn’t as damaging as Lynn’s old Fear Factory ring intro. However, it gets a good review because they had the good sense to mute Dave Mustaine’s vocals and let the excellent musicianship carry the tune.

The biggest surprise and possibly best tune on this CD is Bruce Dickinson’s cover of “The Zoo” (which I’m pretty sure was originally done by the Scorpions, but I could be wrong). For its excellent use of power-metal, dynamics and Bruce’s exceptional range, which he doesn’t overuse in this case, again the intended wrestler has departed (Bam, Bam). So maybe they’ll give this to someone else and not waste such a kick-ass tune. Muscadine, Monster Magnet and Tres Diablos (basically Pantera minus Phil) round out the CD with competent versions of “Big Balls”, “Kick Out the Jams” and “Heard it on the X”, for Balls Mahoney, Axl Rotten and Francine respectively.

With Extreme Music, ECW has delivered a solid first outing, which although overly reliant on covers is heavy, varied and groundbreaking. One can only hope ECW survives these troubled times and releases its second CD sometime next year and that the other federations take note and stop ripping-off the fans with low effort comps and crappy entrance music.