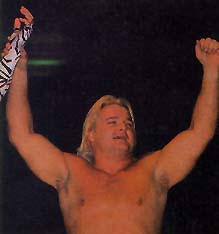 Greg “The Hammer” Valentine has high hopes for the future.

Seasoned grappler and all around tough guy – Greg “The Hammer” Valentine – is not living in the past. He’s keeping a close eye on the future as his could be a whole lot brighter than the glint off King Kong Bundy’s head at high-noon if Hollywood Hogan’s rumored negotiations with the Fox Network are successful.

A long-time pal of Hogan, the accomplished tag team veteran (NWA and WWF titles) and dominant singles competitor (U.S. and Intercontinental title reigns) wouldn’t talk specifics but did let SLAM! Wrestling in on some of the rumored plans for a proposed Fox – Hogan wrestling federation. Valentine is convinced that Hogan’s “retirement” is his escape hatch so he can pursue bigger and better things such as a run for the U.S. presidency.

“Hogan’s breaking away from WCW. He’s retiring so he can get out of his contract. I can say that much because that’s public,” said Valentine in a telephone interview.

If there is to be a fourth major wrestling federation Valentine is confident he’ll be a legitimate contender in the title hunt and perhaps put his 28 years of experience in the industry to work behind the scenes booking matches and angles.

“It’s possibly something really good for me,’ said The Hammer. “I wish I could tell you what it’s about but believe me, it’s going to happen. It’s something REALLY big.”

For now though, Valentine is content to be busting heads and knee caps in Ontario’s International Championship Wrestling federation. With promoter Ike Shaw at the helm, ICW is rapidly attaining a solid reputation for featuring quality cards with big name draws like Dan Severn, King Kong Bundy and others. ICW’s Hamilton show on December 19th is their most ambitious yet. Scheduled to appear are Dan Severn, Duke Droese, King Kong Bundy, The Bushwackers, The Headshrinkers and of course… Valentine himself.

ICW isn’t small time. They’re thinking big by building a solid foundation of which their partnership in the Hart Brothers School of Wrestling located in Cambridge, Ontario, plays an important part. That kind of commitment is something Greg Valentine can appreciate. The Hammer was so impressed with the Hart Brothers facility that he’s sending his 22-year-old daughter Vanessa there to learn the ropes.

“I enjoy being with ICW in Canada. I enjoy being a part of something that’s new and something I can help build up,” says Valentine thwarted in his bid to capture the ICW World Heavyweight title on November 29th when cagey champ Bruiser Bedlam resorted to using brass knuckles to steal away the win. The Hammer hasn’t forgotten Bedlam’s attack and is promising that the ICW champ will be taught a lesson…but good.

Vanessa’s upcoming “tour of duty” closely parallels her father’s own baptism by fire. At the age of 19, The Hammer was put on a Calgary-bound plane by his father – esteemed pro wrestler – Johnny Valentine. The Hammer had become fascinated with the world of pro wrestling after traveling around with his father throughout Texas and decided that he didn’t want to return to college. As any good father should, Johnny Valentine discouraged his son from abandoning his pursuit of higher learning. When that didn’t work he sent the youngster to Stu Hart.

Valentine distinctly recalls his first meeting with the world’s most famous wrestling trainer. Stu Hart met Valentine as he got off the plane in the middle of winter. Hart approached Valentine and squeezed the teen’s muscled forearms again and again.

“Big arms,” said an impressed Stu Hart and left it at that. Valentine trained at the Hart family compound for a little less than a year. It is not an experience he has ever forgotten.

“People were screaming from the basement of the house which they called “The Dungeon” where Stu trained the guys. He was nice to me. He didn’t hurt me as bad as some of them but he had some guys screaming their lungs out. That place is still legendary,” he said.

The Hammer’s most vivid memory of his time spent in Calgary was Stu Hart routinely walking out of the house in his bare feet in ten inches of snow calling for his cats. There were about twenty or thirty cats in total. Even though some were horribly injured or maimed, they were all Stu’s special pets.

Valentine’s first match was in Calgary against Angelo “King Kong” Mosca. He was bowled over in under five minutes. Valentine credits Hart with giving him the skills to evolve into a main event caliber wrestler.

“Stu’s a legend. No wonder Bret and Owen are so tough. I am proud to say to everybody that I came from Stu Hart’s Dungeon because it’s like the boot camp of wrestling,” he said proudly.

From the frigid cold of Calgary, The Hammer went on to Detroit to be further educated by The Sheik (Ed Farhat). Teaming with Don Fargo as his partner, Greg Valentine became the “Johnny Fargo” one half of the Fargo Brothers tag team. Though starting to make a name for himself, Valentine still couldn’t as of yet climb out from under his father’s shadow. Living up to the Valentine name put great pressure on the young star.

“When you’re the son of a famous person they expect a whole lot out of you or they say you’re trying to be like your father. Even if you are as good, they still don’t want to look at it that way. It’s really tough for anybody that has a famous father. My father wanted me to learn the hard way. I suffered. I made a living but the first six or seven years I did it on my own and I’m glad he let me do it that way because you can’t have your father babysitting you,” said an appreciative Valentine.

Eventually, The Hammer would head down to the Carolinas where he would be tagged up with a student, a good friend and a tag team partner of his father’s: the one, the only, Ric Flair.

In the NWA during the seventies, Valentine and Flair were a complimentary duo winning the tag belts on several occasions. To this day, Valentine and Flair’s styles are often compared. Much has been debated about who “stole” what from whom. Valentine set the record straight once and for all.

“I was my father’s son so I naturally wrestled like him,” explained The Hammer. “I got that talent from my dad so that’s why I think Flair and I are compared so much. Beyond that, Ric Flair and myself – after my father’s accident – were put together by the promoters. Then, we became the World Tag Team Champions in 1978. We had those belts a long, long time too. I picked up things from Ric and he picked up things from me. That’s where we got our similar styles. I have a lot of respect for Ric.”

Moving on over to the World Wrestling Federation, Valentine would rip the Intercontinental title belt from the waist of fan favorite Tito Santana by snapping his knee in the figure four leg lock in London, Ontario. The angle would go down in the pro wrestling history books as a bloody, bitter and entertaining feud.

Valentine played a major role in the WWF’s wrestling revival in the eighties as a singles grappler and then as a WWF Tag Team Champion with his long-time pal Brutus Beefcake. Managed by the colorful Johnny Valiant, The Dream Team injected a new-found excitement into the tag team scene. They were brash. They were bold. But, underneath the pomp and circumstance were two exceptional grapplers. Their matches against The British Bulldogs are classics in the pro wrestling archives. Valentine did join forces for a short while with Dino Bravo as the “New Dream Team” but the chemistry just wasn’t the same.

“We had a big heyday in the eighties,” Valentine recalled. “I remember Beefcake and myself selling out Maple Leaf Gardens against The Bulldogs and the very next night we went to Montreal and wrestled them again. We sold the Forum out. That’s when wrestling was really hot then and now it’s hot again. I think it’s hotter now because of the war that WCW and the WWF are having.”

According to Valentine, his pal Ed Leslie (AKA: Brutus Beefcake) whom he worked out with recently, will probably land wherever Hogan does but not being able to bill himself under his former WWF persona is still a sore point with the Hogan protege.

“He’s mad that he can’t use the name “Beefcake” because of Vince McMahon owning the name. That’s hard for him. It’s REAL hard for him. If I couldn’t be Greg Valentine, that would just kill me.”

Vince McMahon pulled Valentine back into tag wrestling by promising him the tag team belts once again if he would tag up with the Honky Tonk Man as Rhythm And Blues. The Elvis inspired team was managed by Jimmy Hart. The title reign never came about and Valentine was signed to wrestle in Japan. Unhappy with the situation, he quit and has done spot jobs for WCW and the WWF since. During his brief tenure under the WCW banner, Valentine never saw eye to eye with Vice-President Eric Bischoff. The Hammer predicts that Bischoff’s days are numbered.

“I don’t get along with Eric (Bischoff) and that’s why I’m gone. But, that’s all changing too. He probably won’t even be there much longer. I see Dusty Rhodes and Flair..people like that…taking over. It’s evident that it’s coming around to that,” he said.

Dabbling in real estate ventures (some more lucrative than others) Valentine hopes that when the time comes to hang the tights up for good that he, like his father, can pass down the art of professional wrestling to other young hopefuls and share the wealth of knowledge and skill he has acquired over the years. Till then, Valentine has some sensible advice for anyone pondering a career in the squared circle.

“I would proud to tell someone…Hey, if you want to be a wrestler, go for it because you can make a real good career for yourself. You’ll last longer than you would if you were going to be a football player or punch-drunk like an ex-boxer. You can be a wrestler for a long, long time. Go for it but make sure you have that night job and an education.”