The highs and lows of Superfly Snuka

Let me tell you something, brutha. Talking to Jimmy ‘Superfly’ Snuka is a little like dialing up your internet provider during prime time. You’re just hoping to get through.

The Superfly, who has certainly flown high during the years, is now coasting through the weekend independent wrestling scene.

In Toronto at Appleby’s Bar for an Apocalypse Wrestling Federation show at the beginning of October, Snuka took a little time to talk to Slam Wrestling. 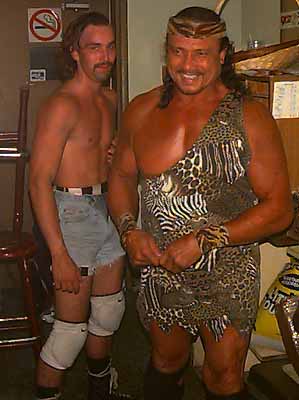 To put it bluntly, Snuka’s not all there these days. He didn’t seem to give much thought to any of my questions, if he even answered them at all.

But that’s my opinion. Read on to make your own judgment.

First off, what’s going on in Superfly Snuka’s life these these days?

However, the question I asked was on his favorite wrestling memory.

Wearing a caveman-like outfit and flip-flops on his normally bare feet with his hair tied back, Snuka looked like the Snuka of memory. He’s lost much of his much heralded physique, and is defensive about his age. “Look, how old do you think I am! Do I look what 40, 45, how ’bout 50? Is 50 okay!?” (He’s at least 54.)

His answers range from the standard athlete-type quotes (“I take it easy and try to work out as much as I can. Keep in shape and keep in good health.”) to repetitive (“brutha”) to Cheech Marin-like (when asked about his personal demons and time away from the ring, he responded “well, brutha, you know there’s, you know I do a lot of travelling, you know. My mind is always clean. I really got no worries about anything, you know.”)

There’s no question that the Superfly has seen a lot of road during his days — and a lot of adventure. Some of it is even true.

He did jump from the top of the cage — barefoot — at Madison Square Gardens straight into legend.

He was instrumental in the rise of the WWF in the eighties as one of the top faces below the champ Hulk Hogan. “I’m really grateful that he’s doing really fine for himself.”

He was the first ECW champ in 1992, beating Sal Bellomo and holding the belt on two occasions.

But when I mentioned that I was interviewing Jimmy ‘Superfly’ Snuka to my boss, a former Toronto Sun sports editor, I was encouraged to look up the following story.

In 1983, it took nine sheriff’s deputies and two police dogs to drag Snuka — in his underwear — from a motel room in Salina, NY. Part of the UPI report read “Deputies called for additional help and when more manpower arrived, authorities forced open the door and tried to push back the grappler. Deputies said Snuka, who is 6-foot and 240 pounds, struggled and pushed an officer against the wall.

“Another deputy put a nightstick against Snuka’s neck and the first deputy got one handcuff on the wrestler’s right wrist. It took several more minutes for nine officers to place a handcuff on the other wrist. Snuka had to be dragged to the patrol car in his underwear after refusing to put on his clothes. …

“During the scuffle between officers and Snuka, one police dog bit a deputy on the thigh and bit Snuka twice, once on each thigh, authorities said.”

Police came to the scene around 2 a.m. after receiving a report of a woman screaming.

The other legendary Snuka story also had him on the receiving end.

That time, however, it was a coconut to the head by Roddy Piper during a Piper’s Pit episode that did the damage.

Snuka, who currently calls Hawaii home, was the first to bring up the incident, when asked about his favorite opponents.

“Roddy Piper,” he said with a growl after mentioning Don Muraco, another long-time rival. “He’s the one that hit me in the head with a coconut, and how can you ever forget that!”

The follow-up question was, Why do you think you and Piper hit it off so well in the ring?

He was equally insightful on today’s high-flying ring action, which he pioneered in North America.

“Well, I guess I created it all for them, brutha, you know and I love it. I love it because I guess I’m a role model, you know, and everyone wants to follow you. I think it’s great, man!”

The WWF Hall of Famer even believes that he still has it. “I don’t have to be younger. I can still do it. You bet!”

To say that Snuka mailed in his performance against Sheik Mustafa later that night would be an insult to mail carriers everywhere. He did win, and did do a Superfly of sorts, hampered by the low ceiling and all, but it would never go down as even an adequate match.

All things considered, though, Snuka is still a legend. Just about everyone at the AWF show walked away with an autograph, and many with photos of themselves with The Superfly, including the other wrestlers. He does seem to genuinely care about his fans, and the indy scene.

“I love to do independents. I like to do a lot of raising funds for people and stuff. So I love my career.”

Far-fetched though it may be, I did have to ask about the possibility of returning to the big show with the WWF or WCW.

“I hope so, brutha. If the price is right, The Superfly will be there.”

But not all there.