Is it Wednesday again? With days of the week nearly indistinguishable from each other under the current circumstances, the calendar is the only thing suggesting that it is, in fact, time for another episode of AEW Dynamite. The TNT Championship tourney continues, and Jon Moxley faces off against Jake Hager for the even bigger belt, so let’s get to it, not quite live on TNT.

We’re still going full blast on trying to position Lance Archer as a major threat, but if it means more Jake “The Snake” Roberts promos, that’s not a bad thing. Poor Colt Cabana might be getting fed to the wolves here, but let’s see.

“Colt likes to be a little goofy sometimes,” Chris Jericho says. “He needs to leave that behind or Archer’s going to take it out on his ass.” Indeed. At the very least, Cabana is getting a chance to show his toughness and determination, absorbing a ton of punishment but getting several mini-rallies before his inevitable defeat via the Blackout. Just going to take a wild stab at it and say Archer is ticketed for the final.

Dr. Britt Baker wants to teach us something about fair play, which is ironic in her current heel persona. Also, ESPN’s MMA maven Ariel Helwani weighs in on who will win between Mox and Hager. Interesting. He likes Hager, while Taz believes Moxley will find a way to prevail.

It’s good that wrestlers like Golden are getting a chance to get some of the Dynamite spotlight, but this is a really brief squash that doesn’t really feel like it did much for her or Baker.

If you ever wanted to see Ortiz’s bedroom, this segment is for you. The Inner Circle is on a group Houseparty chat (or some kind of video chat) making fun of their rivals from their respective homes. Funny bits include Hager telling his kids to put their earmuffs on before he drops some curse words and Jericho spilling orange juice while cooking eggs as his many dogs look on.

I have to admit that I did not know that Sugar Dunkerton was working with AEW, but you learn something new every day. As he does often, Jericho uses this as an opportunity to put over his protege and remind us all that he brought Guevara into the promotion. Sammy gets some mic time after his victory to deliver a spoiler about how he’s going to beat the hell out of “that face-painted weirdo” Darby Allin. But when Allin charges in to stop Guevara from beating up on Suge D, Guevara hightails it out of the ring.

Jericho is not feeling the Freshly Squeezed one, acting offended that Cassidy is wearing a shirt with his own face on it. He also drops a self-deprecating reference to wearing leather pants in the hot tub a few weeks back. Some good action eventually turns into hijinks for the finish, as Jimmy Havoc takes out Cassidy on the outside and Ford hits a move on Chuck while the ref is otherwise occupied.

Yes, Spears is still looking for a tag team partner, though one wonders why he needs one since his singles career is a thing again. This is another quick victory for the self-styled Chairman. Now someone please be his partner or something.

Jim Ross is calling the main event, and … hey, this isn’t the same arena! We live in strange times, friends.

There’s still more than 30 minutes left in the show, so these guys are going to have plenty of time to work. Despite the stipulation, there’s plenty of amateur-style wrestling in the early going, but why are there rope breaks in a No Holds Barred bout? That is a question for which we are unlikely to get an answer. Another great question is asked by J.R. when he wonders why there are security barriers in an empty arena. It becomes relevant as the men fight further out onto the empty arena, then up into the covered up stands. The fight makes its way back to the ring in surprisingly short order, where Hager finally remembers there’s nothing stopping him from using a steel chair. His plan seems to be to soften up Mox for an ankle lock, but the champ turns the tables on him with a body scissors. Hager knees Moxley in the crotch only to be greeted by a chair to the face and a Paradigm Shift on the steel. Hager isn’t kicking out after that, and the replay shows that he was quite the trooper by taking that thrown chair to the grill. Mox says to the camera afterward that “AEW is the hottest promotion in the world, and I am on top.” The first point may be debatable but the second definitely is not. In any case, that was physical and not horrible, but the kind of match that lost something without a live crowd. ‘Tis the world we live in for now, though, so we have to be thankful for any wrestling we get. See you in seven! 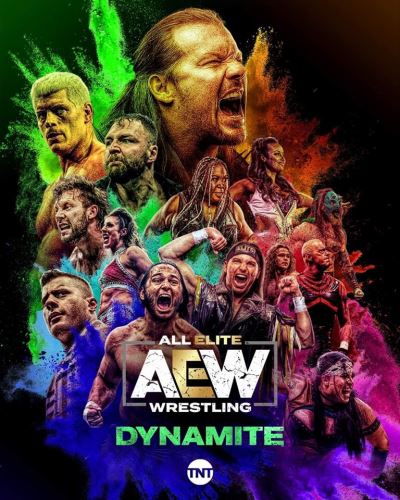