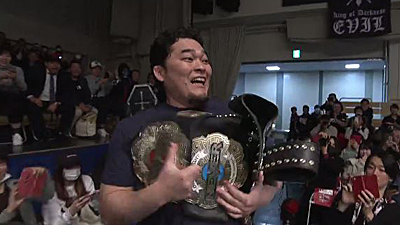 Evil started the match off with a boot to the mid-section of Goto. The rest of the men in the match entered the ring and brawled against each other. Eagles worked over Evil’s arm but other Los Ingobernables de Japon members helped Evil regain control in the match.

Evil dominated Eagles in the Los Ingobernables de Japon corner. Evil made a tag to Shingo to continue the domination. However, Ishii entered the match and kicked Shingo in the back. Bushi and Eagles became the legal men and the pace of the match picked up. Evil delivered a bronco buster on Eagles for a two count.

Eagles hit a leg lariat on Shingo to give him enough time to tag Ishii. Both Ishii and Shingo exchanged elbows. Shingo delivered a stiff forearm to knock Ishii down. Goto was draped over the second rope and Evil stomped Goto into the mat.

Evil delivered a hard clothesline on Goto for a near fall. Evil attempted Everything is Evil but Goto reversed it into a Magic GTR with the help of Ishii. Evil hit Darkness Falls on Goto and both men recovered on the mat. Eagles hit the Turbo Backpack for a near fall on Bushi. Eagles applied a leg lock on Bushi and Shingo broke it up.

Bushi attempted the MX but Eagles reversed it and followed up with the Ron Miller Special leg lock. Bushi spit the blinding mist into Eagles eyes followed by a small package for a near fall. Bushi hit the MX on Eagles to win the match.

Out of nowhere, Toru Yano took the NEVER Openweight belts and ran to the backstage area with them but before doing so he threw the Shingo’s NEVER Openweight Championship back towards the ring. This left the champions with no belts to hold high.

“Yano, behave! For the last time, bring them (the belts) back! If not, we will make sure we get them back at Kōrakuen Hall!” yelled Bushi from the ring.

“Today, we won but we don’t have any belts but we are still the champions,” continued Bushi.

The match started off with some amateur wrestling moves. Tsuji grounded Uemura with a headlock. Tsuji attempted a Boston Crab but Uemura quickly got out of it. Uemura delivered a forklift suplex on Tsuji for the win.

Henare and Nakanishi kicked off the match by exchanging forearms. Tenzan delivered Mongolian chops to Honma. Nakanishi took out both Henare and Honma and then tagged Tenzan to continue to work over Honma. Tenzan hit a moonsault on Honma for the win.

CHAOS attacked Suzuki-gun before the bell rang and everyone brawled all over Kōrakuen Hall. Sabre Jr. applied the cobra twist on Ospreay in the bleachers. When the match returned to the ring Ospreay got the better of Sabre Jr. Sabre Jr. rolled to the outside of the ring and had a temper tantrum. Desperado hit CHAOS with a chair and got disqualified.

Suzuki-gun jumped their opponents before the match. Suzuki-gun focused their attack on Makabe. Makabe took out the three members of Suzuki-gun. However, Suzuki-gun eventually regained their dominance over Makabe. Taguchi hit the Dodon on DOUKI for the win. After the match Suzuki attacked the young lions.

Naito and KENTA started the match off and KENTA rolled out of the ring just as both men were about to lock up. The Bullet Club attacked Naito and the match spilled to the outside with KENTA and Naito brawling around the seats of Kōrakuen Hall. When the match returned to the ring, KENTA dominated Naito in the middle of the ring. Ishimori entered the match against Naito and the paced quickened. Naito hit the Destino on Ishimori for the win.