HOUSTON — There are three certainties in life: Death, taxes and WWE’s NXT-branded shows delivering in a big, big way.

On Saturday at Toyota Center, WWE introduced its Worlds Collide concept — six matches pitting the best of NXT against the top of NXT UK.

In professional wrestling, cards that look great on paper too often don’t end up that way for one reason or another. With an all-star roster showcasing their skills inside the squared circle, Worlds Collide showcased some of the best in-ring action WWE has to offer from start to finish.

With this not being a traditionally branded “Takeover” event the night before a major pay-per-view, the attendance suffered in comparison to large crowds seen at Takeovers in 2019 in Phoenix, Ariz., New York City and Toronto. The entire upper bowl was curtained off, with a sparse group of fans on the camera side and then even noticeable swaths of empty seats in front of the hard camera.

That being said, it was definitely a crowd with an international flavor (which you could easily judge just by listening to people as you walked around the concourse), most presumably in town for the doubleheader with the Royal Rumble, which made for a fun and festive atmosphere.

In an unusual move, the pre-show was heard inside the arena. However, it was simply just the audio played over the speakers with no video component. On a show where mostly everyone was beloved, the wholly unlikeable panelist Sam Roberts was the most hated man on the show, as the crowd booed every time he spoke. He played it up by trashing Texas at every turn.

You could tell from the first match of the live special that it wasn’t your normal super-hardcore NXT crowd. Finn Balor received a hero’s welcome but it seemed as if his opponent, NXT UK mainstay and uber-talented Ilja Dragunov, might as well have been a “local competitor.” But if the crowd didn’t know much about Dragunov coming in, they sure do now. He and Balor captured the audience with a terrific opening contest.

Deep in the heart of Texas with a heavy Latino presence in the crowd, Garza was beloved. The ladies in the crowd went wild when he removed his pants.

The most anticipated match of the night to many in attendance was the NXT tag team dream match between Mustache Mountain and the reunited DIY.

This tilt showcased all that is wonderful about tag team wrestling and professional wrestling. In a 20-plus minute affair, all four competitors showed they could handle the light-hearted side of the sport and the ultra-serious.

Those in the crowd completely loved DIY — cheering them wildly at every turn but Tyler Bate and Trent Seven were loved as well. Chants for both teams rang out throughout the arena. After the match, all four showed major respect for each other.

NXT Champion Rhea Ripley and Toni Storm had the unenviable task of following that match. While Ripley especially was very popular, the match itself could not hold a candle to the preceding match and it suffered as a result with not much of a reaction from bell-to-bell. It also didn’t help that the end of the match came out of nowhere.

The main event eight-man tag between Undisputed Era and Imperium showcased two of the best factions in WWE.

The match was thrown a curveball when Imperium’s Alexander Wolfe was legitimately knocked out by Bobby Fish and had to be removed from the match early on.

The two teams held everything together inside the ring and there weren’t any noticeable missteps for a while, but as the match progressed, there was quite a bit of chaos that you normally don’t see.

In what likely didn’t show up on the broadcast, referee Drake Wuertz was flying all over the place as the match wore on, making sure everybody was where they needed to be. At one point, with Walter in peril in the ring, Wuertz sprinted out of the ring to communicate something to Imperium’s Marcel Barthel and Fabian Aichner and seconds later they were breaking up a pin attempt.

Even as the final few minutes of the near 30-minute epic seemed chaotic, those involved battled hard. The Undisputed Era is typically NXT’s most popular act, but Walter received a reaction almost at their level, especially when he pinned Fish with a shotgun drop kick and power bomb to end the match.

After the show went off the air, Undisputed Era gathered for a group hug in the centre of the ring and walked to the back with their music playing.

All told, I’ve attended 10 WWE Network NXT shows. All 10 have delivered the goods all the way. With the intensity of the crowd and the talent of the wrestlers, it’s almost impossible to have anything less than a great NXT special. Worlds Collide was certainly no exception. 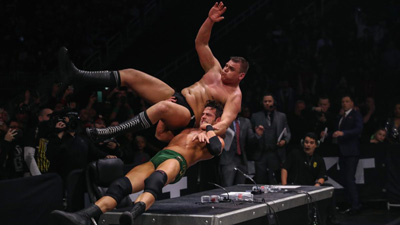