A word to the wise, don’t piss off the French-Canadian Frankenstein.

Dave Morissette, the host of TVA Sports’ DMD, learned this valuable lesson when he had RoH World Champion, PCO, as a guest on his show.

Morissette not only laid his hands on the RoH Championship belt but also on POC’s manager, D.Destro. 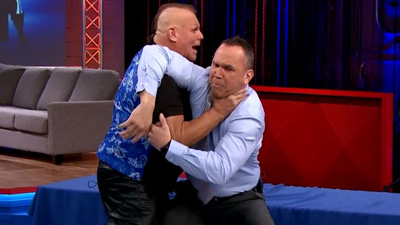 That was a big mistake.

“Nobody touches my manager!” growled PCO before chokeslamming Morissette through a table.

“I told you! Don’t touch the belt!” yelled D.Destro at the fallen Morissette.

“Nobody touches my manager! I don’t care!” shouted an angry PCO.

Crew members rushed to Morissette’s aid as PCO and D.Destro stomped off the set.

At press time, the extent of Morissette’s injuries aren’t known but SLAM! Wrestling wishes him a speedy recovery.

PCO told SLAM! Wrestling that he doesn’t regret what happened.

“Morissette wanted to put the belt around his waist. Destro was just protecting the title. Morissette started arguing with him. When he put his hands on Destro I had an electrical malfunction. I told him not to touch my manager! PCO Monster Mania is running wild all over the world!” he said.

You can watch footage of the entire incident here.