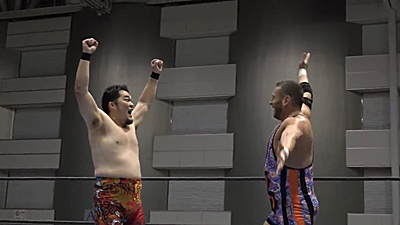 Tomohiro Ishii and Yoshi-Hashi have some competition for the top spot in NJPW’s World Tag League tournament. They now share that distinction with Juice Robinson and David Finlay as well as Toru Yano and Colt Cabana.

The odd couple of Yano and Cabana stole a win right from under Tomohiro Ishii and Yoshi-Hashi even though the team had a bit of “miscommunication” during the match. Not completely understanding what Yano was telling him, Cabana elbowed Yoshi-Hashi of the ropes in a double team when Yano wanted double knees. Yano and Cabana hugged when Cabana figured out the Japanese phrases for elbows and knees.

Cabana and Yano outsmarted the Chaos team when Yano pushed Ishii into Yoshi-Hashi, punched Ishii in the “lower abdomen”, mule kicked Yoshi-Hashi in the same area leaving him open for a Superman pin from Cabana.

The always flamboyant team of FinJuice (Juice Robinson and David Finlay) defeated the team of veterans Togi Makabe and Tomoaki Honma. With Finlay taking care of Makabe on the floor, FinJuice was able to double team Honma. Honma did his best to fight off both but eventually the numbers game caught up with him. A Stunner from Finlay and Pulp Friction from Robinson pinned Honma.

Goto put away Kojima with the GTR.

Tanahashi got the two points for his team with a High Fly Flo on Nakanishi.

Last of the Dragon from Takagi puts away Chase Owens.