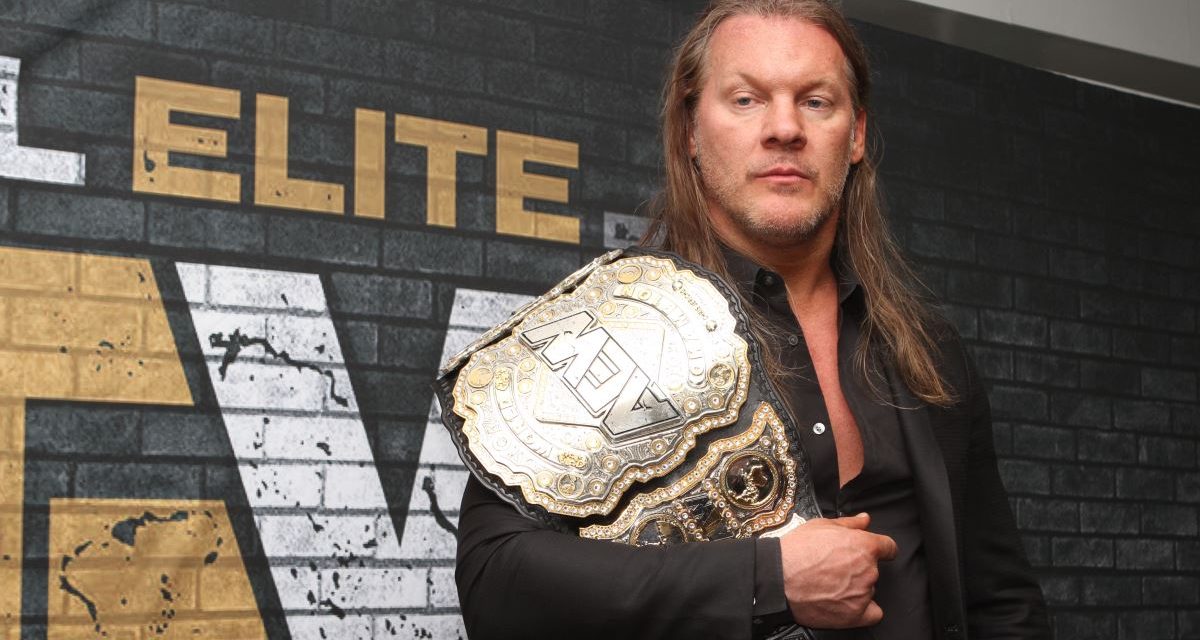 BALTIMORE — On his 49th birthday Saturday, Chris Jericho proved why he continues to be one of the greatest of all time and is under strong consideration for wrestler of the year.

Jericho defended his All Elite Wrestling World Championship against Cody Rhodes in stunning fashion at AEW Full Gear at Royal Farms Arena, as now-former Rhodes confidant MJF threw in the towel to end the match before turning on his former best friend with a low blow. 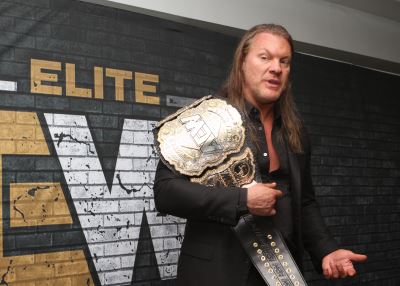 The win in a bitter grudge match, no matter what circumstances it came under, underscores the work Jericho has put in in 2019. In fact, to him, how the match ended was a moot point.

“I don’t want this to be stuck in the fact that MJF threw a towel in the ring,” Jericho said post-show. “If you saw what happened, Cody was beat up, bleeding all over the (expletive) place, plus he was so tied up like a pretzel, there was no escape. Throw the towel in, don’t throw the towel in, but don’t diminish the win Chris Jericho had over Cody Rhodes tonight.”

Jericho and Rhodes went back and forth and had the crowd inside Royal Farms Arena rocking, with the fans steadfastly behind Rhodes and against Jericho. However, when all was said and done, it was Jericho being carried out on the shoulders of his fellow Inner Circle members, spraying everyone with champagne as a defeated Rhodes was left to figure out what’s next.

“Cody was a great performer,” Jericho said. “It was one of the best matches I’ve ever had in my career and one of the best matches in AEW’s existence. This isn’t the time to sit down and think about other contenders. This is a night to celebrate and appreciate the hard work I did and basically single-handedly beating Cody Rhodes and putting AEW on the map, so you’re welcome for that.”

The win was Jericho’s second defense of the championship he captured in August. Now, as he put it, with no immediate challenger on the horizon, Jericho has his sights set on not only being “Le Champion,” but “Le Double Champion.”

Jericho blasted AEW’s tag team rankings and officially laid down a challenge, which was later accepted, for he and Sammy Guevara to challenge Frankie Kazarian and Scorpio Sky for the AEW World Tag Team Championship this week on AEW Dynamite.

“I think the rankings for the tag team division is a bunch of (expletive),” Jericho said. “Sammy Guevara and Chris Jericho are undefeated as a tag team and we’re not even in the top five. … I think it’s time for us to go further.”

“Chris and Sammy have a valid point,” Khan said. “They hadn’t really put their hat in the ring as a tag team, but they are undefeated as a tag team and absolutely merit consideration, so we’re going to do that match.” 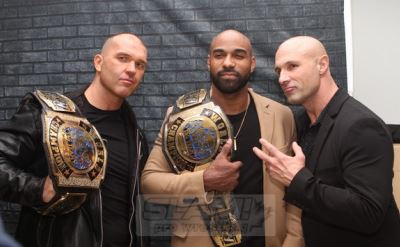 To their credit, Kazarian and Sky, fresh off their first championship defense in a three-way match with the Lucha Brothers and Private Party, wasted no time in accepting, saying they’ll gladly defend against all comers.

“Bring it the hell on,” Kazarian said. Sky chimed in, “Do these look like running shoes?”

AEW ON ITS WAY TO CANADA?

With Dynamite finding a home on TSN in Canada and the numbers continuing to grow, Khan said Canada is on the radar for a show in 2020.

“It’s certainly a possibility that Canada could get the first non-U.S. show,” Khan said. “I think it’s possible. We’d like to do shows all over the world, we have so many great international partners, but I think we’d certainly like to go to Canada, London, which is one of my hometowns. … I don’t have exact dates in 2020, but I’d like to do that.” 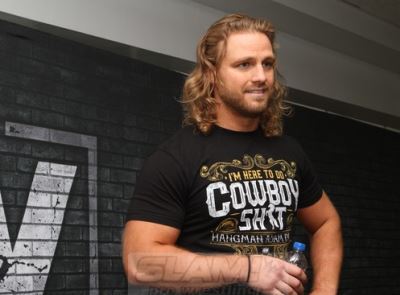 ANOTHER MATCH SET FOR DYNAMITE

The tag team championship match wasn’t the only match confirmed for this Wednesday’s edition of Dynamite from Nashville.

Fresh off his victory over Pac, Hangman Adam Page wants the chance to settle the score once and for all with “The Bastard.” With both men holding wins against each other inside the AEW ring (Pac scored a win Oct. 2), the rubber match has been signed for this week.

For Page, 2019 has admittedly been a trying year, and Hangman said he doesn’t know if the win at Full Gear was vindication.

“It’s weird,” Page said. “I don’t talk about it a lot, but it’s weird being in The Elite and my teammates are the Best Bout Machine (Kenny Omega), the best tag team of all time (The Young Bucks) and Mr. AEW Cody. It’s hard. It’s big shoes to fill as far as partners. I felt this year I have not done it. I beat Pac tonight and I’m happy about it, I really am, but we’re 1-1. So I haven’t really beat him in the way I needed to. I would like to have a rubber match, to be honest with you, and I’d like to have it as soon as possible.” 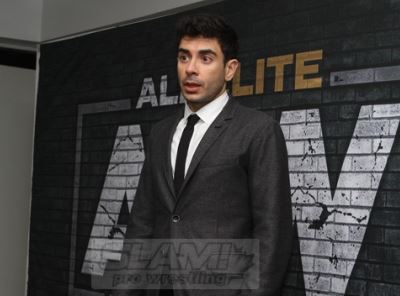 Joey Janela suffered an unspecified injury near the conclusion of his match with Shawn Spears. Referee Earl Hebner called for support and medical staff, referees and even Jungle Boy attended to Janela, who laid motionless on the canvas for several minutes after the bell.

Janela eventually rose to his feet and left under his own power. Khan said Janela is “absolutely going to be OK.”

“I wanted to get everyone out there to check on him immediately and called for people right away when the referee called,” Khan said. “(Jungle Boy) was back there and he and Joey are super tight and wanted to check on him as a friend. He’s totally going to be OK and I think he’ll be at Dynamite (Wednesday).”

Kenny Omega, who lost to Jon Moxley in the evening’s final match in an unsanctioned lights out match, might not be as lucky according to Khan.

“Hopefully Kenny will be available (for Dynamite),” Khan said. “If he’s not back this week, I don’t think it’ll be anything that’s going to keep Kenny out super long term, but Kenny had a rough night, and for Jon it was no picnic for him either.”

Khan said the match was “pretty gruesome” and he had concern for both athletes, but said they were really happy with the match.

“The guys didn’t do anything that really would’ve put either of them in harm’s way to a point where we didn’t feel good about doing it,” Khan said.

Page also came out of his match with Pac a little nicked up. A spot late in the match saw Pac hit Page with a suplex near the guard rail, which left Page with a nasty mark on his back — and a little bit more.

“I wasn’t worried about my back as much as my neck,” Page said. “I got a little stinger. My parents were watching and asking about my thumb, but when you get a stinger sometimes your hands numb up a little bit, so you have to keep them (moving), so that’s where I’m at.”

Is he going to miss any time?

Jericho also chimed in on AEW’s battle with WWE’s NXT brand on Wednesday nights. AEW has won the head-to-head ratings battle in the United States each week since the two shows started squaring off Oct. 2.

“Am I surprised we’re winning? Of course not. I knew we would,” Jericho said. “Our star power crushes NXT’s star power. And exactly what I knew what was going to happen, NXT, what made it cool is it was a standalone thing. Now it’s just another WWE show. It’s like 2009 ECW. So, good for them. God bless them. I’m sure at some point Roman Reigns will be on NXT now, and Hulk Hogan will return to a TV studio for the first time since 1981 in Memphis. That’s fine. All we’re gonna do is continue to worry about ourselves, concentrate on our storylines, our matches, our characters and building stars.”

… Khan said the next AEW pay-per-view will be in the first quarter of 2020, but was not quite ready to make an official announcement yet, but said it will be coming soon. He did add that Double or Nothing will again take place at the MGM Grand Garden Arena in Las Vegas over Memorial Day weekend in late May.