Silver King has passed away. The luchadore legend who once starred in Nacho Libre died in the ring while wrestling in London’s Camden Town on May 11. César Cuauhtémoc González Barrón was 51. 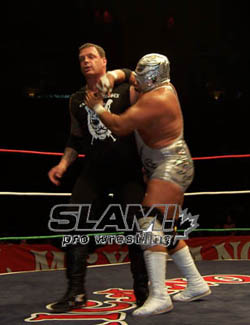 Vampiro is tied up by Silver King at the AAA show in San Jose. Photo by Mike Lano, SLAM! Wrestling.

Witnesses say Silver King collapsed to the canvass while facing Juventud Guerrera and could not be revived. It is reported he suffered a heart attack.

Also known as the third incarnation of the Black Tiger character, Silver King was the son of Dr. Wagner and the brother of Dr. Wagner Jr. González.

King debuted in 1986 as El Invasor (The Invader) but shortly thereafter took the identity that would become his trademark persona: Silver King. 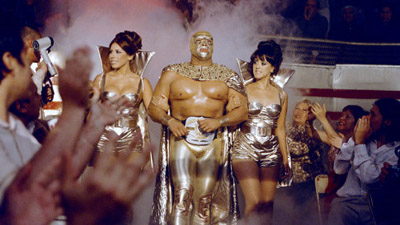 After working for WCW in the late nineties, Silver King was signed by NJPW to become Black Tiger III. From there he went to All Japan Pro Wrestling and AAA.

To become the CMLL World Heavyweight Champion he defeated Black Magic on July 28, 1994. Silver King would hold the title until June of 1995 when he would lose it to Apolo Dantés in Mexico City.

In 2006, Silver King starred opposite Jack Black in the film Nacho Libre. As César González he played Ramses, Nacho’s adversary throughout the movie.

Wrestlers from all around the world stopped to remember the wrestling legend upon hearing of his passing. 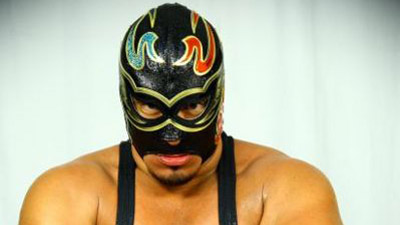 Silver King with a new mask in 2008. Photo Courtesy of: AAA Wrestling.

Ken Shamrock Tweeted: “Words cannot describe how sad this makes me feel. Rest easy Silver King, you will forever be a champion. I hope the best for his family and fans.”

“Absolutely awful news emerging about the confirmation of Silver King passing away this evening. Such a horrible situation, my heart goes out to all involved as well as to his loved ones. Tragic,” wrote NXT UK’s Ligero.

Christopher Daniels Tweeted: “The news of Silver King’s passing hits me hard. I was lucky to be able to tour & work New Japan with him. Such a great person. Rest In Peace, good sir. #RIPSilverKing.”