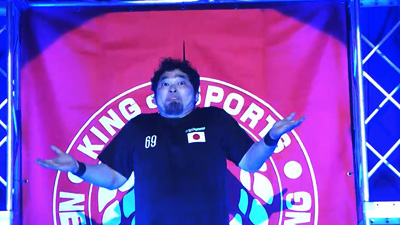 The last Canadian in this year’s New Japan Cup has been eliminated. Calgary’s own Davey Boy Smith Jr. was beaten by the ever devious Toru Yano.

Known as the “Master Thief”, Yano stole another victory to frustrate Smith Jr.

Smith Jr. chased Yano into the audience as he made his way down to the ring.

The two wrestlers ran around the arena until Yano dodged a kick almost pinning Smith Jr. with a roll-up.

Smith Jr. knocked Yano down with a shoulder tackle. Yano fled the ring ripping down one of the turnbuckle pads. Smith Jr. met Yano on the floor slamming his head into the ring, whipping him into the ringside barricade.

Smith Jr. slammed a steel chair into Yano’s chest before he ripped Yano’s curry dinner package in half throwing the remains into the audience. The curry dinners are one of Yano’s sponsors. Yano raked Smith Jr.’s eyes, reached into his pants and pulled out a roll of athletic tape. Before Yano had time to use it Smith Jr. punched him in the face sending the roll of tape flying.

“Are you going to make me break it?” asked Smith Jr. of Yano’s knee as Red Shoes demanded he bring the fight back to the ring.

Smith Jr. picked Yano up dropping him knee-first on the announce table.

“I told you I would make you pay!” yelled Smith Jr. referring to the fact that Yano has become a thorn in his side for quite a while.

“If you are going to count me out, count me out referee!” Smith Jr. shouted as he eventually rolled Yano back into the ring.

Smith Jr. spun out of the way causing Yano to ram himself into the turnbuckle he himself exposed. A reverse DDT got Smith Jr. a two count.

In an upset of sorts, Colt Cabana beat Togi Makabe.

Bullet Club (Taiji Ishimori, Hikuleo, Bad Luck Fale and Chase Owens) defeated Yuya Uemura, Michael Elgin, Juice Robinson and Yoshi-Hashi. Ishimori made Uemura submit to the Yes Lock. Chase Owens and the other Bullet Club members swarmed Yoshi-Hashi. Owens labeled Yoshi-Hashi, his next opponent in the tournament, with punch after punch. “I am tired of Yoshi-Hashi in New Japan!” Owens told the announcers as he headed to the back.

Chaos (Will Ospreay and Tomohiro Ishii) beat Suzuki-gun (Lance Archer, Taichi). Ospreay pinned Archer countering Blackout with a crucifix pin. Taichi hit Ishii with his microphone stand in the throat and low blowed him. Archer delivered a Blackout to Ospreay.