Fathers’ Blood spills onto the page

In Oliver’s second foray into pro-wrestling non-fiction, (the first being Kayfabe: Stories You’re Not Supposed to Hear from a Pro Wrestling Production Company Owner) he explores what happens to professional wrestlers who don’t heed the warning of the aforementioned lyric.

The journey began when Oliver (no relation to SLAM! Wrestling producer Greg Oliver) was attending the hit musical, Hamilton. Already being questioned relentlessly about what his next book project would be, Oliver was inspired by the interaction onstage between the actors portraying Alexander Hamilton and his son. 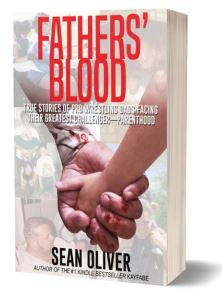 “I was just kind of struck that I could do something maybe a little more important,” recalled the 45-year-old Oliver in a phone interview with SLAM! Wrestling. “And maybe something with a touch of gravitas. And yeah, it’s only wrestling but the human element of these guys that I’d been working with is the thing that was always the most interesting to me, more so than the history of the sport.”

The concept for the book was also a product of Oliver’s work with Kayfabe Commentaries, where for the last 10 years he’s produced interview-based wrestling programming. (Oliver is the co-founder and President of the company.) In the extremely honest, yet so much so it can be uncomfortable, Introduction of the book, Oliver discusses an emotional interview he had with Sean Waltman. After discussing Waltman’s many demons including addiction and run-ins with the law, Oliver writes that he was faced with choice of “being a good content producer but a lame person; or a lame content producer but a good person.”

Oliver chose to go for the jugular. He asked Waltman about his responsibility to his kids. Oliver writes:

His face went lifeless and his entire body had the air taken out of it when I mentioned his children. I said their names. I was going to beep them out anyway, but for the interview, I needed him to hear me say their names. He began to well up.

“How fucked up do you think they are, Sean (Oliver)?” he asked me through tears. “Pretty fucked up.”

I told him there was still time to make amends. He was still alive. Reconciliation was up to him.

The dichotomy of the interview with Waltman left Oliver “disgusted as a person and excited as a producer,” but it also fueled him to undertake the personal nature of this project. To start, Oliver chose to focus on wrestlers who lived a “traveling circus” existence in the days before current amenities like social media, internet and smart phones. His interview subjects include: Lanny Poffo, Jason Williams (son of the late Gary Hart), Shane Bigelow (son of the late Bam Bam Bigelow), JJ Dillon, Tito Santana, Tony Atlas, Vince Russo, Kevin Sullivan and Eric Bischoff (who also wrote the book’s Foreword).

“It was fascinating to me how these guys maintained homes, family homes, and truth be told it was always the wives that were maintaining it,” expressed Oliver, who resides in New Jersey. “They were busy working, but just from both sides of it, the kid with a dad on TV expressing a blood lust weekly and how that translated to other kids in their neighborhood and at school. Then being the dad who is on TV saying that he wants to tear someone’s head off, a heinous thing in an era where they strived for believability and then what’s it like when you come home? What’s it like when you pick up the kids from church? So, I went there.”

The project took Oliver approximately five months of interviews, research, writing and rewriting to complete. The result is an intriguing and conversational narrative of professional wrestlers balancing home life with an extraordinary work life. The chapters cover the gamut of family life to dealing with kayfabe to facing retirement from the squared circle. Some of the subjects even contributed personal family photos, with the highlight being Poffo’s family photos featuring the late “Macho Man” Randy Savage and Miss Elizabeth. There are the expected sad stories, such as the addictions and death of Bam Bam Bigelow and Atlas’ one-night stand that forced an instant and ultimately unsuccessful family. But even more unexpected and remarkable are the revelations that for some including Bischoff, Santana and Poffo, it was indeed possible, albeit with some very unique challenges and anxieties, to have a happy family unit.

“What I’d like them (the readers) to take from it is just the experience that allowed them a personal look into people they’ve enjoyed on television as performers for many, many years, but seeing them in a light very atypical, very unlike one they’ve seen them in before,” revealed Oliver. “And ultimately coming away with the fact that they are people and not very much unlike us or the people that raise us. That was one of the takeaways that I had. The business and the sport and what their fathers were doing on television is very abnormal, but the life of these kids and their families, with the exception of the amount of time their fathers were away from home, were very normal. The lives they lived were normal. The things that they went through, the things that they dealt with were very normal.” 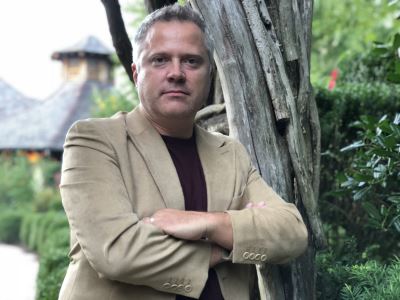 And despite how some readers may feel about Oliver’s tactics in his interview with Waltman, the book reveals, dare this writer say it, a softer side of Oliver. The usual cocky and self-assured manner of Oliver, especially visible during his interviews and previous book, has given way to a more vulnerable one. It’s an observation Oliver isn’t fully comfortable with nor sure how to take, but he will accept that being in a possibly softer mindset allowed him “to spotlight the things that should have been prominent” in the book.

This mindset is evidenced further still in the Introduction (yes the same section with the aforementioned details of Waltman) of the book when Oliver writes that after reading his first book, so many people have asked him about the fate of Christopher, the young son of the late Balls Mahoney. Oliver, in consultation with Mahoney’s friend, Johnny Candido, had intended to include a chapter focusing on the boy, but decided he “could not, in good conscience, go into too much detail about aspects of Christopher’s life today, and throughout his father’s death.”

“Oh God,” sighed a serious Oliver. “It was back and forth with Johnny Candido, who I was writing it with. It was just the responsibility of handling this boy’s emotions at this time of his life. Balls was an open book about his life, so I didn’t so much worry about little Chris having to read that his father did drugs. But having him read how his coping as a 10-year-old boy with the death of his father… I just… I didn’t know if I had the right to have the responsibility.”

Added Oliver, “By all accounts (Chris is) doing fine, but I didn’t want to talk to his mom about whatever he is doing to cope and however they are getting him through it. I didn’t necessarily want to have to air it because he might not want that out there in a few years.”

While this writer agrees with Oliver’s call to cut the chapter on Mahoney’s son, I can’t help but probe if anything further happened with Waltman.

Oliver says he doesn’t regret the interview and he actually wanted Waltman to be one of the subjects featured in the book. Unfortunately, when Oliver reached out to him, Waltman was going through a personal tragedy, so he decided to not pursue it further. He did send Waltman the Introduction of the book and while the two haven’t discussed it yet, Oliver said that Waltman seemed open to having him appear on his podcast. Oliver says he is also open to writing Fathers’ Blood 2.

“There’s a lot to explore in wrestling quite honestly,” concluded Oliver. “How much of it will make a good book, that’s what I have to spend time on. Wrestling is a very unique item and if handled interestingly, you can do so many things with it, and this book is a great example of how something that is theater and many times absolutely ridiculous and classless, can be treated seriously and presented in a manner that probably goes beyond what it deserves.”