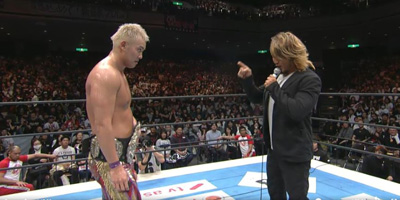 Kazuchika Okada retained the IWGP Heavyweight Championship defeating Zack Sabre Jr. in a match where both wrestlers focused on submission holds. The ace of New Japan, Hiroshi Tanahashi, came out after the match to challenge Okada for his title.

Kenny Omega and Cody furthered their feud going into the ROH supercard event. Cody used underhanded tactics to gain advantages over Omega and Ibushi. Cody and Hangman Page defeated the Golden Lovers in the semi-main event.

The battle of the Bullet Club started off the show. Everyone shook hands but when the Bucks turned around Yujiro and Chase attacked them from behind. Matt Jackson held his back with a grimace on his face. Matt fought the rest of the match through back pain and had trouble doing some moves because of his back.

Chase hit a Jewel Heist for a near fall. Yujiro and Nick fought on the outside of the ring while Matt locked in a Sharp Shooter on Chase for the submission victory.

Suzuki-gun jumped Chaos before the bell rang and Iizuka and Yano fought on the outside of the ring while Ishii and Taichi exchanged strikes in the ring. Iizuka returned to the ring and Ishii was double teamed. Yano tried to help Ishii but the referee did not allow him in the ring.

Ishii eventually made a hot tag to Yano who took the turn buckle cover off. Iizuka grabbed an iron glove but Yano delivered a low blow while Ishii clotheslined Iizuka. Yano pinned Iizuka for the win.

Loa and Elgin started off the match and wrestled into the ropes. Loa punched Elgin as they were broken up and Loa did a Fargo strut out of the corner. Bad Luck Fale choked Elgin with a microphone cord then said “Elgin has one of those faces you just want to punch the f–k in”.

Fale and Elgin returned to the ring with both men trying to take each other off their feet. Makabe put Fale down for a near three count. The Bullet Club triple teamed Taguchi in the corner. Tama Tonga hit the gun stun for the win over Taguchi.

White and Finlay started the match off and the fight quickly spilled to the outside of the ring. All six men fought each other outside of the ring with multiple wrestlers whipped into the guard rails. Goto was tagged in and worked over Finlay with chops and then a submission hold.

Finlay hit a dropkick then tagged Robinson who did his signature series of punches on Goto. Tanahashi and Yoshi-Hashi were tagged in and the pace of the match increased with high impact moves on each other. Tanahashi hit a frog splash on Yoshi–ashi for the win. This match had many layers with brawling, technical wrestling, and high flying.

Suzuki started off the match dominating Naito who spit on Suzuki’s face, which got Suzuki mad. Naito raked Suzuki’s eyes to gain the advantage in the match. Naito dared Suzuki to hit him and the fight went to the outside with Suzuki whipping Naito into the guard rail and onto the English announce table.

Lance Archer was terrorizing a kid ringside who was crying his eyes out while the people around him booed. Sanada delivered a series of high flying moves on Archer and Smith Jr. The Killer Elite Squad hit the Killer Bomb on Evil for the three count.

Sho and Yoh dove onto El Desperado and Kanemaru before they could enter the ring. Bushi and Hiromu tagged in and out frequently to work over Yoh. Kanemaru tagged himself in and worked over Yoh. Yoh tagged Sho and dominated Kanemaru. Roppongi 3K double teamed Hiromu and Kanemaru. Hiromu hit the Time Bomb for a near three count. El Desperado who was not the legal wrester pinned Sho for the win.

The bout started off with some great chain wrestling with Ospreay doing flashy submissions while Scurll attempted to ground Ospreay. Scurll avoided a series of kicks from Ospreay and begged off asking the referee for a time out.

The match spilled to the outside and Ospreay returned to the ring to dive on Scurll. The match returned to the ring and Scull slowed down the pace of the match and worked over Ospreay’s neck. Ospreay mounted a comeback but was holding his neck and moving slowly during his comeback. Ospreay hit a one-man Spanish Fly from the apron to the floor and hit his head dangerously on the apron. Blood ran down Ospreay’s face as he attempted to get back to his feet. Scurll delivered very stiff stomps on Ospreay’s head. Ospreay hit the OsCutter for the win.

Ospreay grabbed the microphone and challenged Kushida who gave a thumb’s up to accept the match. Ospreay took to twitter saying that he may miss his matches on WrestleMania weekend due to this match.

Omega got the hot tag and cleaned house but was quickly doubled teamed. Cody pulled out a table and Page slammed both Omega and Ibushi on the table. The Young Bucks appeared at ring side and said to Cody “look what this has come to” and walked away in disgust. Cody received a kick to the face, which busted him open on the eyebrow.

Ibushi hit Cody and blood sprayed everywhere. Omega attempted to hit a one-winged angel on Cody off the apron with a table under them but Page saved Cody and kicked Omega who crashed through a table, which cut his back. Page grabbed Ibushi and Cody rolled up Ibushi and grabbed the tights for the win.

Sabre Jr. shot on Okada and took him down to ride his back and transitioned into submissions in the middle of the ring. Every submission applied by Sabre Jr. was a catch wrestling style submission. Both men went into the ropes and Sabre Jr. released the hold but Okada locked in a submission as they were breaking.

Okada transitioned into a series of lucha libre submissions. Sabre Jr. reversed the submission with violent British wrestling holds and stretched Okada. Okada attempted a dropkick and Sabre Jr. grabbed both legs in mid-air to lock in a submission.

The match shifted into a striking exchange. The fight went to the outside and both men brawled into the audience. The match returned to the ring and both wrestlers kicked and chopped each other. Okada tombstoned Sabre Jr. and reversed it into an omoplata. Okada delivered another tombstone and hit a rainmaker for the win via pin fall.