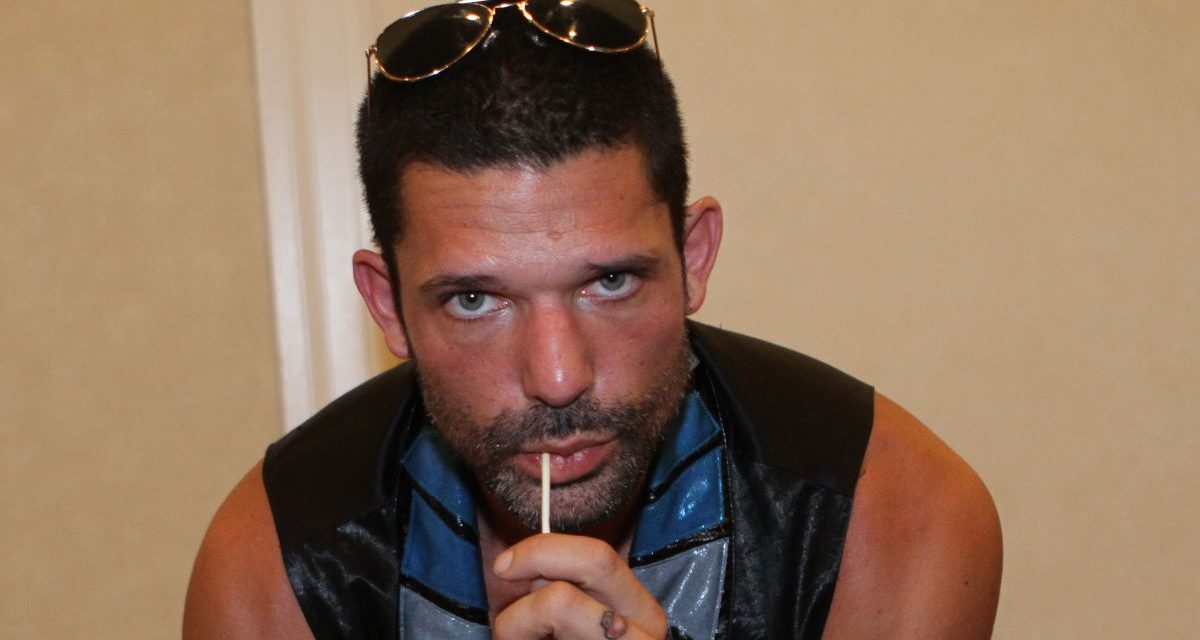 Most wrestlers when starting their journey towards stardom go through the independent scene, gaining bookings and travelling the world to gain experience. But not former WWE star Adam Rose.

No, things for the South African-born Raymond Leppan — Adam Rose, and now Aldo Rose — were more than a little different. 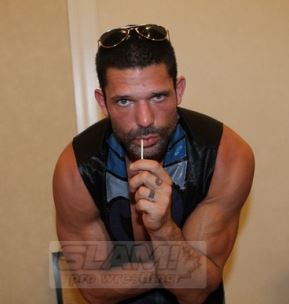 Adam Rose at the Legends of the Ring fan fest Saturday, October 15, 2016, in Monroe, NJ. Photo by George Tahinos.

A fan of pro wrestling at a young age, when he reached 15 years of age in 1995, Leppan knew he wanted to be an in-ring competitor and for him there was no better way than talking with The Pink Panther, Paul Lloyd Sr., who was the biggest South African star at the time.

However, Lloyd Sr. told Leppan to “go away” because he was “too little and too young” and at 140 pounds, The Pink Panther was right — Leppan was too small at a time when the big man heavyweight style of wrestling was the norm. Eventually, Leppan was allowed to train, even though he was considerably smaller than his colleagues — was until Lloyd Sr. called his son to train with Leppan, that man was former WWE star Justin Gabriel.

Leppan and Gabriel wrestled for a year, opening the shows for Lloyd Sr.’s promotion and the two eventually set up a tag team called Pure Juice. He also wrestled as Dameon Duke in World Wrestling Professionals. While there, he won the WWP world heavyweight championship by defeating Tornado in 2007.

After thinking his dream of making WWE would never happen and becoming what he would describe as “semi-retired,” it was in 2010 that things all changed. Leppan decided to go to America and attend a WWE tryout on the recommendation by Gabriel who was already signed with the company.

“For me it was a shock to the system,” Leppan explains how he found the acclimatization to the big leagues of WWE and America. “I didn’t know much when I came to America, there were like 50 people at the tryout and I was signed when AJ Lee was, this was the same time Mason Ryan was signed too, but it took a year longer for me to get there because of visa issues.

“I took every last cent I had to attend. I had to get it out of my system, I had to try it. I let everything go because I thought if I didn’t I would never know. I wasn’t signed on the spot, it was about three months later. The tryout match was horrible. I thought I didn’t get through, I went back home and just continued working.

“The next thing I knew, after not hearing anything, I heard from WWE and was signed.” 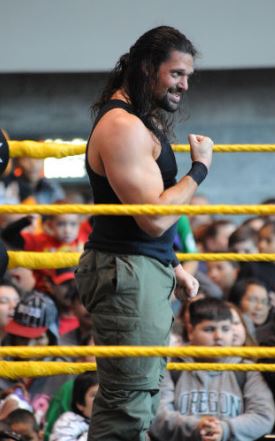 When FCW was dropped and WWE established NXT, Kruger, a creepy character, feuded with Sami Zayn losing a two-out-of-three falls match in early 2014. After this, the Kruger character was taken off TV.

Later that year, the Kruger character was replaced and Leppan debuted a new gimmick and completely different persona which changed his direction.

“I didn’t want to change the Kruger character, I loved it. I spent many different years with different versions of that character. I do believe that there was a disconnect though, which I saw myself because I’m 220 pounds and I’m 6’1”, that I couldn’t pull off this big, freaky character, I needed to be more of a monster.

“I still thought the character had legs and that the evil, creepy character would work. At the same time, The Wyatts had debuted and they had the monopoly on creepy so a change was needed.

“I came up with Adam Rose with Dusty Rhodes. The entire point of Rose was supposed to be, and in a PG era it was always gonna be hard to explain, but basically the bus was supposed to rock up, hot chicks would pour out, I was supposed to come out stumbling, win a match and stumble back onto the bus and leave. 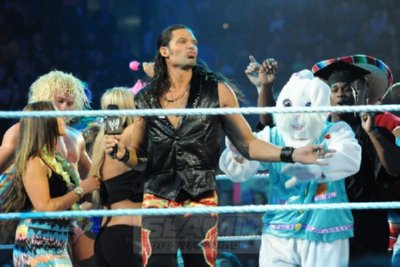 Adam Rose and the Rosebuds in May 2014. Photo by Mike Mastrandrea

The new persona didn’t last long in NXT as WWE saw potential for Rose to move up to the main roster. However, as Leppan describes things went downhill from the moment he debuted on Raw.

“Firstly, I wish the character had longer in NXT, in fact I wish it never had left. Secondly, I wish that we had debuted as a heel. I think if we had done that and let the crowd adjust to it, it would have been way better.

“My entrance in NXT we turned down the lights and had cool music, when I got to Raw the lights were on and they replaced my music. It was cooler in NXT, but when I look back it was starting to drift away from cool towards the end. In NXT I had the guy with the Samurai sword, the chicks and it had a night club vibe to it. Somewhere along the line we became singing and dancing Sesame Street and it happened so quickly.

“It all comes down to endorsements and Party City were one of them. I didn’t want a 35-year-old man in a hot dog suit as a Rosebud, but Party City wanted it. It came down to money and everything changed. The character would have lasted longer if we’d never gone down that direction.

“At the end of the day it was supposed to be Jack Sparrow, I wasn’t supposed to have a clue what was going. I’d arrive, win the match and then leave.

“I wish we never ever had gone the Sesame Street route, where it became all about the song and the costumes. That’s where we died a thousand deaths.”

However, one of Leppan’s favourite moments in his career came in England at a WWE Raw show, it’s something he cherishes looking back on his career.

“The UK fans chanted my name and theme all the way through the event, That crowd was the highlight of my WWE career. I was so new, Vince [McMahon] and Triple H had no idea who I was at that point. The fans were singing the song, chanting my name, so basically Vince yelled for them to bring me out.

“In the ring it was Triple H and [Wade] Barrett and Vince sent me down, Hunter and Barrett had no idea I was coming and I did my thing, the crowd erupted and we had how ever many thousands of people chanting ‘lemon’ at Hunter, which was amazing.” 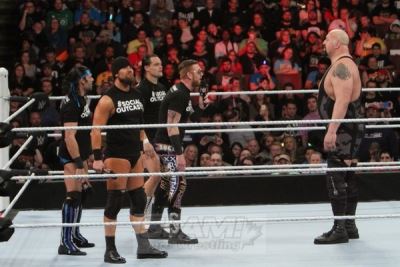 The Social Outcasts confront The Big Show in March 2016. Photo by George Tahinos

Realizing that its creative department had nothing for Leppan, in January 2016 along with Heath Slater, Curtis Axel and Bo Dallas, WWE put the four together in a new group called the Social Outcasts, who were a goofy team that really didn’t get much attention by the company. Leppan looks back fondly at the group, and heaps praise upon his stable mate, Slater, a recent WWE tag team champion.

“People can say what they want about it, but that group was getting the second loudest babyface pops on live events at one points. It was starting to catch, it was four characters who got along and I think that group had legs, once again the chains were on and once again we fought so hard to get our shackles off, but we couldn’t.

“Heath’s killing it. As long as he doesn’t peak and drop off. Because it’s happened before he’ll peak and then drop off. I hope this time it’s a legitimate push that WWE keep and they hold onto and run with. Not something they just run with for a bit and then disregard.”

After a turbulent 2016, which saw him violate WWE’s wellness policy and on May 11th, get arrested for tampering with a witness and battery domestic assault, WWE, which has a ‘zero tolerance’ policy on domestic abuse would later grant him his request for a release.

Since his release, Leppan has adopted the name Aldo Rose and continues to do a similar character to that of his WWE persona. However, Leppan is enjoying this incarnation a lot more.

“I can push the barriers a little more. One of the greatest things about the independents is we get more control over our own product, and what’s funny is most of the time when talent gets control over their own product, it works.

“Because we understand our product more than anybody else. Paul Heyman actually sat me down and told me that he never told ECW guys like Tommy Dreamer, Sandman and all those what to do, he let them be themselves and it got over.

“The problem is micro-management, you cannot micromanage talent. I know myself better than any writer’s going to know, so I have a better understanding of what’s going to work.

“Funny enough, it’s become so much part of me I don’t know when to turn him off. But, I think Aldo Rose is pretty much me smashed out of my mind.”

When asked about his future, Leppan is optimistic understanding the opportunity he now has to flex his creativity and truly shape his own destiny.

“Right now I’m having so much fun, I’m just exploring myself and things I can do with the character and I’m having fun with it.

“I get to explore openly, freely and creatively, something which I’ve never had before and funny enough the character works now. We’re so programmed to think WWE is where we want to be, that we don’t realize there’s anything outside of it. Then when I got there and it wasn’t what I wanted it to be, it was like well, now what?

“At the end of the day, how many people can say they did what they wanted to at nine years old. I can. Now, I get to explore the creative part of this and the part that I actually loved. I’m at my best now, I learned a lot in WWE but I can apply it so much more now.”