The highly successful, long-standing UK magazine Power Slam may have ceased publishing in the summer of 2014, but it hasn’t stopped editor Findlay Martin from compiling stories from the best bits of the magazine’s 20 year history. 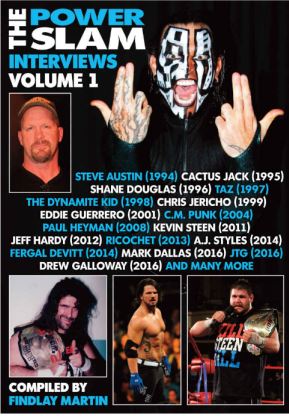 In a follow-up from his 2015 book entitled Pro Wrestling Through The Power Slam Years: 1994-2014, Martin returns with The Power Slam interviews Volume 1, a collection of some of the most memorable and interesting interviews from the pages of the magazine.

There’s an interesting mix of interviews here from a range of big stars throughout the industry at various times in their careers and it’s really interesting reading them now and looking back at what they were up to during that period of time. Ones that really captivated this writer were “Stunning” Steve Austin in 1994, around the time he lost the United States championship to “Hacksaw” Jim Duggan in an embarrassingly quick loss and Martin’s talk with Paul Heyman, which he himself touts as one of his favourites.

“Each interviewee earned his spot, so to speak,” Martin states as he explains which interviews he prefers. “If I had to pick a favourite interview, it would be the one with Paul Heyman from 2008. As I wrote in the book, this was a long time coming. I think it was worth the wait.

“However, the Shane Douglas chitchat in 1996 was an eye-opener at the time, and still delivers a wallop today, in my opinion. Then WCW wrestler Chris Jericho provided us with another hard-hitting interview in 1999. The timing of our conversation could not have been more fortuitous.

“The Paul London confab, recorded by Greg Lambert in 2010, demonstrated that it was still possible to surprise readers. London’s account of his WWE run was scathing. However, he recounted his adventures with such wit that it was impossible to dislike him.

“The Kevin Steen interview from 2011 is fascinating, considering his current status as WWE’s Universal champion. When we spoke, Steen dismissed the idea that he would even be offered a contract by WWE.”

It has to be said in a clever little touch, what Martin has done really well is include a nice newly penned introduction to the interviews, giving the reader some background on reasons for the interviews at the time. Martin confesses that this is the part he found most difficult.

“The introductions involved much scouring of old notebooks and research material pertaining to each interviewee in order to immerse myself in the relevant time frame and take the reader there with me. Every introduction was a story in itself.

“I think the introduction to The Dynamite Kid interview, originally published in November 1998, was the toughest to write. Dynamite had been such an outstanding performer in the late 1970s and ’80s and a major star all over the world and yet, by the time we spoke, he was confined to a wheelchair and living on benefits.

“My emotions were further conflicted by my dealings with him on the autobiography Pure Dynamite, which I published in 1999, and the disturbing revelations about him in Bret Hart’s autobiography, and the CNN documentary Death Grip, first broadcast in November 2007.”

Overall, this e-book is well worth the price of £6.49 or $6.95 US, with Martin even adding in some new interviews he’s completed with subjects such as Drew Galloway, Jerry Lynn and Tommy Dreamer. The older interviews still hold up by today’s standards and even over 20 years on, reading between the lines on Steve Austin’s kayfabe talk about Hulk Hogan’s arrival to WCW and his standing at the time is truly fascinating. If you’re a wrestling historian or a fan of the print publication, pick up a copy, you won’t be disappointed.

DARREN WOOD is the editor of Total Wrestling Magazine.