Mat Matters: Looking back at The Canadian Wrestling Report

A few months back, I had the complete run of my Canadian Wrestling Reports digitized, but then didn’t do much about it. Then along comes Father’s Day, and my son and I were talking about my on-going projects, and about 30 minutes later, I’m in my office, being interviewed by a nine-year-old for his first documentary film.

And with Canada Day here, it would seem a good time to re-introduce the world to my old newsletters — now available for sale! 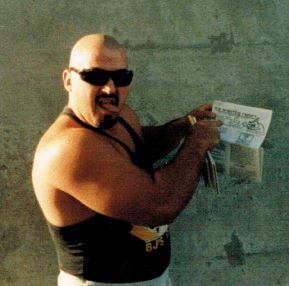 Before he was imprisoned for murder, Johnny K-9 was a fan of The Canadian Wrestling Report. Photo by Greg Oliver

The Wrestling Report started in August 1985, out of my home in Kitchener, Ontario, and in many ways is the basis for what I still do today, writing, editing and managing the SLAM! Wrestling website. Here’s a short version of the story.

My dad had bought an Apple IIe computer, a just-released computer at the time. Then my younger brother, Chris, brought home a newspaper that his class had designed at school on a computer. As my notes from the time state, “we could see potential in the program so we bought it. The Newsroom by Springboard is designed to be a simple newspaper program.”

It’s actually been a hoot re-visiting some of these old notes. Here’s more of the genesis, written by a 14-year-old me: “We sat down together to think of a newspaper. Many ideas came to mind including a ‘V’ newspaper and a hockey newspaper. But like everyone else, we were hooked on pro wrestling and chose it as our topic.”

My best friend, Serge Solski, came on board during those early issues — he’s the one that LOVED Roddy Piper and the heels. The first issue was printed at my dad’s office in August 1985, and most of the issues were sold to friends and his co-workers. Then school started up again, and we had a bigger market.

“The rest is history, as it is said,” I wrote then. “Our paper began to grow, as did our staff and our customers. It turned out that just not kids were into wrestling. Adults bought copies too.”

In September 1988, we switched to Personal Newsletter, from Softsync, Inc. That changed us from legal size paper, usually four pages, with the various pieces taped or glued together, to six letter-sized pages, printed out as one unit. Each August issue was a “birthday” celebration and usually with an extra page.

It should be noted that my dad, especially, was pretty supportive. On a part-time basis, he and my mom self-published The Buyers Guide to Factory Outlets with information on all the Ontario factory outlets, so they understood the entrepreneurial spirit — even if they didn’t understand our obsession with pro wrestling. It also meant that we had access to envelopes, stamps, labels, letterhead, and all those extras that were a necessary part of getting your newsletter out to the people.

At first, we advertised in the smaller newspapers and gave out flyers at a couple of shows. The local newspaper, the Kitchener-Waterloo Record wrote about us — “Young editors wrestling with success” — in May 1986, and the story ran in a couple of other places too through Canadian Press distribution. (It’s such a dated photo of us too, as my brother has hair — long gone now — and there’s an A-Team poster behind us.)

But the big score came when Norman DaCosta plugged it a couple of times in the Toronto Star newspaper. (Frank Zicarelli at the Toronto Sun never did, and of course, years later, I end up working there.)

The next big break came when Ed Whalen gave The Canadian Wrestling Report — the “Canadian” part was added in November 1988 — on his Pro Wrestling Plus recap show nationally on TSN. All of a sudden, we had subscribers from across the country.

As well, there was the standard trading of newsletters and plugs with others. It’s cool to know that some, like Wade Keller’s Pro Wrestling Torch, which started just after I did, is still going today. (Wade, this Internet thing IS going to take off, I tell you!)

In the summer of 1987, my mom and dad tried to get me to quit, but one of my subscribers was at the K-W Record, the late TV writer Bonnie Malleck, and once again, I was the subject of a story: “Down for the count; Teen resists parents’ ultimatum on wrestling magazine.” That rallied the troops, as it goes, and I kept plugging along until August 1990. At that point, I knew I was leaving Kitchener to head to Toronto to study journalism at Ryerson Polytechnical Institute (now Ryerson University).

There are so many great memories through the years, from interviews with the British Bulldogs, Road Warrior Animal, Ivan Koloff, Gino Brito, and more, as well as features on many of the men and women from the Ontario circuit, like Ricky Johnson, Johnny K-9, Bullwhip Danny Johnson, Farmer Pete. Plus I regularly got to see Detroit-area grapplers like Chris Carter. I made a ton of friends, many of whom are still friends, especially Terry Dart — the king of Ontario fans as far as I’m concerned. But there’s Wes Maidment, Jim “Eddie Old School” Connolly, Terry Harris, and some that have left us too early, like Dr. Don Dawson. Subscribers John Molinaro and Stephen Larouche both ended up working at Canoe.ca.

All the work on The Canadian Wrestling Report led to so many more opportunities, like my first magazine piece for Wrestling Fury, trips to Chicago and Memphis for fan conventions, and the opportunity to talk with Canadian sportswriting icons like Dick Beddoes and Johnny Esau.

And as thrilled as I am to be able to offer The Canadian Wrestling Report for sale again as PDFs emailed to your inbox — 99 cents for a year, $4.99 for the complete 61-issue run — I’m probably more thrilled with the finished project that Quinn put together for me (unedited, without any preview from mom, dad or a grandparent). Enjoy the mini-doc and try not to think badly of how messy my office is!

Order back issues of The Canadian Wrestling Report