One of the UK’s top talents Kris Travis has lost his long battle with stomach cancer passing away at 32 years old.

Travis, from Sheffield, defied the odds by returning to the ring last year after having surgery and 18 weeks of chemotherapy. However, one month after his return match he retired for good as his ongoing cancer fight continued.

He said at the time: “I’m going to put this out there right now – I won’t ever be wrestling ever again. Gutted yes. But I have to accept this. Lots of love.”

Travis whose moniker was “Shooting Star” was one half of the popular Project Ego tag team with Martin Kirby with the two being a mainstay act on the British wrestling scene.

Kirby, who had incredible chemistry with Travis in their tag team sent out a touching tweet: “Sleep well my friend. You no longer need to suffer. ‪#RIPTrav”

Travis won championships up and down the country but was also noticed for his talents overseas as he also appeared in TNA British Bootcamp where he advanced through the competition to the finals. TNA Knockout Gail Kim was one of the judges on Travis’ season of British Bootcamp, she worked closely with him during the competition and tweeted: “I’m very saddened and shocked to hear this. Love and prayers to his family ‪#RIPTravis” 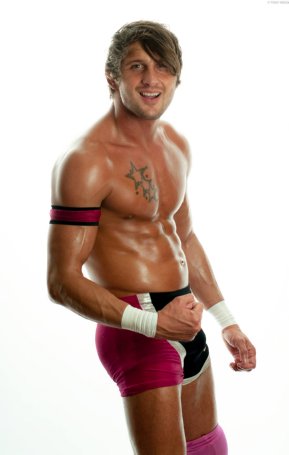 Jim Smallman co-founder of UK’s top promotion Progress wrestling saw Travis’ last match on September 6, 2015, he said in a blog post on his website: “Sadly, his victory over Marty Scurll – in an incredible match, especially for someone who had been away from the ring for so long – would be his last match ever before retiring after his cancer had returned. We wish he could have been wrestling for many years longer, not just for us but around the world. His talents deserved it.

“Kris wasn’t just popular in Progress, he has an outstanding legacy around the UK with phenomenal matches in Preston City Wrestling and Southside Wrestling immediately leaping to mind. And he was always brilliant with newer talent seeing him give feedback to developing wrestlers was wonderful, he had time for everybody.”

While Travis featured up and down the UK for various promotions, one promoter that positioned him right from the get go as his premier talent was Steven Fludder. At the first ever show he booked Travis was in the main event against Joey Hayes in front of 57 fans.

Now promoter of Preston City Wrestling, Fludder stated in a blog post on the PCW website: “At the first anniversary show Travis became the PCW champion and he was overjoyed as he told me it was the first major singles title he had ever won. For the next four years Kris would consistently have amazing matches with the likes of Finn Balor, Joey Hayes, T-Bone, Chris Masters and Noam Dar as he just brought out the best in anybody he faced.

“He was the best talent of recent years the UK produced that never ended up in the WWE. Illness aside I think that is exactly where he would be right now if in good health continuing his battles with Finn Balor in NXT.

“We all miss you already Kris Travis, a fighter right until the end and always in good spirits even with a terminal illness. Both personally, professionally and as a fan and on behalf of myself and all at PCW we hope you’re now in a better place and will remain in our thoughts.”