Veteran Canadian band Finger Eleven has returned with their first album in five years, Five Crooked Lines. Music fans know the bands for their hits like “Paralyzer,” “Good Times” and current single “Wolves & Doors.” The band also has some connections to wrestling, which singer Scott Anderson discussed with SLAM! Wrestling along with the new album and life on the road.

“Oh man, I can’t believe it’s been that long, honestly. It felt like a decent chunk of time,” Anderson said of the five years since their last album. “We never really stopped writing. We just tried to keep improving the material until we were satisfied. We had a label change and a drummer change so all of that stuff took some time. Why it took five years? I think I regret that amount of time that went by and I don’t think we can do it again. We have to put less time between albums. Having said that I can speak for the band, I am immensely proud of the new record. I think it’s much cloer to the mark then we usually get. You always want to try and get as close as you can, sometimes you hit sometimes you don’t. It’s a really nice, definitive album for what we were aiming for.”

Much like wrestlers, musicians feel the call to perform and tour. The band features Anderson on vocals, guitarist James Black, rhythm guitarist Rick Jackett, bassist Sean Anderson and new drummer Steve Molella. Much like a wrestler gets excited to wrestle in front of a hometown crowd, it is a different experience to play your home country.

“It is fun to make music at home but there is nothing like playing live. To get that reaction from something you’ve created with your friends, it’s kind of why you do it. That feeling has been constantly the same ever since we played a high school show. It is the same adrenaline rush and I kind of love that. You keep chasing that feeling, you want to create something and share it with people. Anywhere in Canada feels like home. Not to be corny about it but as soon as you cross that border, it’s like, ‘Oh my gosh.’ You take for granted how awesome Canada is, all you have to do is go away for a little bit and then you go ‘Why leave? This place is amazing.’ There is the ego thing about you wanting the whole planet to know about your record. I still need to do Japan — we haven’t been there yet, we’ve got to get big in Japan.” 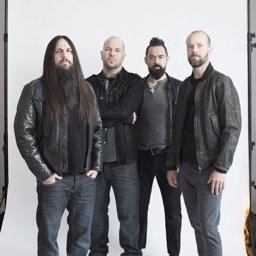 The band has had success in the United States in part because of their songs frequently being used in other media. Their songs have appeared on TV shows like Gossip Girl and Smallville.

For wrestling fans, the first exposure to the band was when their single “One Thing” was featured on the DVDs Cheating Death, Stealing Life: The Eddie Guerrero Story and Hard Knocks: The Chris Benoit Story.

“When those proposals come up I get a little bit nervous because you are trying to figure out what context it’s going to play out in. You have to surrender control and hope that it comes off looking okay. Every time that we’ve got to make a decision whether we give permission or not it is always a big debate. When it gets used properly its kind of neat and I enjoy it.”

The band is more selective in accepting proposals after “One Thing” was requested and used on RAW for a tribute video to Chris Benoit. When the news of the tragedy hit, having the song tied to it was uneasy for the band.

“It certainly was uncomfortable. That decision was not made by the band. We happened to be on the road and permission was given. The person that gave permission has regretted that. It is a prime example of lending your song in haste and not thinking properly. You just sort of have to move on. That is what happens when your material gets married to something else and it doesn’t help anyone.”

A happier tie in to WWE came about when the band was asked to re-do Kane’s theme music for the 2002 Forceable Entry album. The song “Slow Chemical” was used for the Big Red Machine’s entrance until 2008.

“‘Slow Chemical’ would not exist without the WWE opportunity. We were given the riff, and the guys built a song about that riff. I wasn’t sure how much I knew about current wrestling storylines. What do I do? I’ve just got to write a song. There isn’t too much wrestling material lyrically attached to the song. That opportunity forced us to make a song by a deadline of five or seven days. We put together a song we thought was pretty cool and hopped in the studio and banged it out in a day. I remember sitting down singing that song and yelling my ass off. I think it turned out really really well. I am proud of that song, that opportunity created a really cool song for Finger Eleven and Kane.”

It was surreal to hear there song playing at pay per view’s and on TV for millions of viewers.

“Rick and James are huge wrestling fans. It is a nice big moment when something happens like Kane is coming down to the ring at WrestleMania to our song. It is pretty cool that is when your song becomes larger than life,” Anderson said, adding that it exposed the band to new fans. “It is great. Especially wrestling you get a lot of fans that tell us all the time that is how they discovered Finger Eleven. It is a direct result that we gained a new fan because they heard Kane’s theme.”

Finger Eleven is currently touring across Canada on the Fall of the Hammer tour. Whether seeing the band for the first time or someone that has been following the band since they started in 1989, expect a memorable night of rock music.

“You’ve got awesome openers with Head of the Herd. We have a reimagined set that has a really interesting turn midway through it. We are bringing back some songs fans have requested over the years. It’s a reinvigorated band and if you are a fan of rock music at all you are going to have a fantastic time.”