It took a serious health scare to kick Roger Deem into gear and complete his dream project — The Strap: A Complete History of Sam Muchnick’s Missouri State Championship. 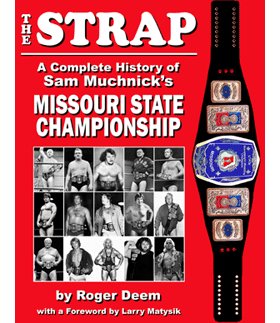 Deem’s journey to get the book out is almost as interesting as the book itself, which is essentially a biography of a title belt, with interviews conducted with the men that held the strap from 1972 until the closing of the St. Louis Wrestling Club in 1987. As well, there are listings and descriptions of every match wrestled when the Missouri title was at stake, the television matches in which the champion wrestled on the famous Wrestling at the Chase television program, reprints of arena program covers, and over 150 photos.

For years, Deem was a wrestling photographer and reporter on the Midwest territories for the magazines. He knows his stuff.

Like many, he drifted away from the current product, but retained an unwavering fondness for the wrestling of his past.The native of Jacksonville, Illinois became a wrestling fan through his grandmother. It’s a story he loves to tell.

“My grandmother was a wrestling nut,” Deem began. “On Sundays, she would turn on Wrestling at the Chase from St. Louis and turn the sound all the way down. Then she’d turn on the radio and listen to the worship service broadcast from Grace United Methodist Church. It was a really funny combination. I learned wrestling at her knee.”

Once his father took him to live wrestling at the Kiel Auditorium in St. Louis, and shared his passion for photography with his son, there was no looking back for Deem.

“From the day I started watching wrestling, I was a Missouri State title mark,” he said. “I just loved everything about St. Louis wrestling. I covered wrestling for the magazines in the Kansas City circuit, the AWA, St. Louis, on a regular basis, but St. Louis was just really special to me.”

He always thought there was a need for a book about the Missouri title belt, but kept putting it off.

Then he faced down and beat cancer.

“It put me face to face with my own mortality,” Deem said. “One day, somebody gave me a picture I had taken 30 years ago, Kevin Von Erich with the Missouri belt. I just sat there and looked at it and said, ‘You know what? It’s not going to happen if I don’t do it.'”

So he set about putting The Strap together, thinking he would self-publish it. Then he ended up talking to Scott Teal, the esteemed historian and publisher of Crowbar Press. 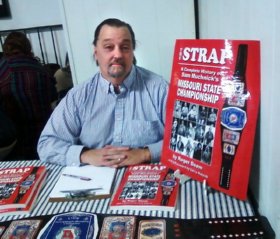 Roger Deem at a book signing in mid-February.

“When Roger first contacted me about the book, he was still working on the first draft,” said Teal in an email. “I’m pretty picky about what I publish and normally prefer to see something close to a rough draft before I agree to publish a book. In this case, solely based on what Roger told me he was doing in regards to interviewing the former title-holders, I was hooked and knew it was something that had to be in print. Roger didn’t let me down. He did a masterful job of pulling it all together. I’m grateful to have been given the opportunity to edit and publish the book.”

One might think that a book about the Missouri state title would not be interesting to anyone outside that state, but Deem said people all over the world have been fascinated with his project.

“It’s really been surprising, and not surprising,” he said. “The Missouri title had a unique appeal to it, and I think most of that was because it was Sam Muchnick’s title. Sam, of course, was huge in the industry, and the magazines gave more coverage, especially in Japan.”

The Missouri title was one of the best known territorial belts, and was seen as a stepping stone to the NWA World title, even though it just existed 15 years. “It actually had a reasonably brief lifetime. But again, it was because who it was, who it belonged to, the champions that carried it — it had a certain aura.” 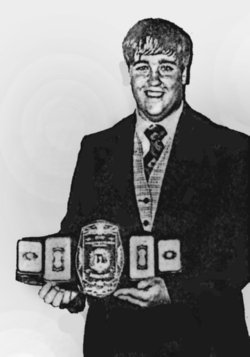 A young Roger Deem with the Missouri State title.

Besides the wrestlers, Deem championed the help of Larry Matysik and Jim Fossell, who both worked in the St. Louis wrestling office, and historian George Schire; they all “went above and beyond the call of duty getting this thing done,” said Deem. In the case of Fossell, who took the place of Larry Matysik for two years in the St. Louis office after Matysik resigned, “this is really the first thing to chronicle his involvement and that pleases me a lot, because he’s a class guy.” Matysik, who chronicled the St. Louis promotion with Wrestling at the Chase: The Inside Story of Sam Muchnick and the Legends of Professional Wrestling, wrote the foreword for Deem’s book.

The hunt for photos was much harder than one might assume for one of the most prolific wrestling lensmen of the 1970s. It turns out that a flood in the late 1970s in Jacksonville resulted in his filing cabinet with most of his photos falling over while he was away. Most of his collection was wrecked.”That would have made things a lot easier if I’d had access to all my old stuff,” said Deem, who has since gotten many of his photos back through eBay and other collectors. “It’s a little bit vexing to have to buy your own work back.”

The 55-year-old Deem doesn’t see himself doing another wrestling project, but does feel a sense of completion having gotten The Strap: A Complete History of Sam Muchnick’s Missouri State Championship published.

“This is an old debt that I have to pay to Sam Muchnick and Larry Matysik,” he concluded. “So much of my life has been effected by my experiences with them. Sam taught me the value of honesty in business and integrity. I basically became a graphic artist using everything Larry Matysik taught me. This has been a labour of love to give back to the people who added so much to my life.”