WCW The Best of Monday Nitro Volume 1 was a very strong WWE DVD release, but Volume 2 is even better. The reason is that with Volume 2 WWE has made more of a concerted effort to showcase the cavalcade of talent that the WCW Monday Nitro television program featured. While stars such as Hulk Hogan, Sting, Ric Flair, Scott Hall, Lex Luger, Randy Savage and Kevin Nash are all featured in this one, they don’t dominate the DVD in the way they did in the earlier one.

By taking this approach, the DVD has some truly special matches. In this collection is a match from 1996 between Jushin Liger and Dean Malenko that has a wonderful ebb and flow to it that truly demonstrates why professional wrestling is considered an art form. The maneuvers in this match are crisply executed and the story that they tell in the ring is first rate. And it is not the only entry in the collection from the WCW cruiserweight division. 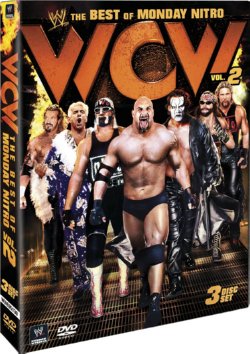 There’s a great match from 1996 pitting Rey Mysterio versus Juventud Guerrera, which is only slightly marred by when the cameras during the match focusing on Ric Flair coming out to drink champagne with Miss Elizabeth and Woman. There is also a great 1997 six-man cruiserweight tag team match pitting Rey Mysterio, Juventud Guerrera and Hector Garza against Psicosis, Silver King and La Parka that’s full of all sorts of crazy spots. As well, there’s a very intense 1998 match between Rey Mysterio and Eddie Guerrero during the days of the Latin World Order.

Diamond Dallas Page is featured in a number of high quality singles matches against Jeff Jarrett, Chris Jericho, and Sting. The 1996 match with Jarrett demonstrates that the two had great chemistry in the ring, while the 1998 match against Jericho makes you wish that it was longer. It is the match against Sting from 1998 for the WCW World Heavyweight Title that provides Diamond Dallas Page with the best opportunity to tell a lengthier story in the ring. The match has a good back and forth flow with some nice hard and snug action throughout and a good ending.

Volume 2 also features some very early single matches for both Booker T and Bill Goldberg. The 1997 match between Booker T and Jeff Jarrett is an excellent prelude for some of the matches the two would have later on, while Booker T’s match with Randy Savage showed how much Booker T had developed by that point and Savage’s knack for putting over younger talent. The Goldberg matches include the first match from the infamous winning streak against Hugh Morrus circa 1997 and a very entertaining WCW U.S. Title match from 1998 against Raven. These particular matches help to explain to those who may not have been watching in the late 1990s what a phenomenon Goldberg was.

Tag team matches are prominently featured as well in Volume 2. There is an extremely stiff and hard-hitting 1996 match between the Road Warriors and the Steiner Brothers that is a great example of why tag team wrestling was special. The match has several reversals and changes of fortune between the two teams before ending up with a bit of a surprising finish to the match. There is also an additional match with the Steiner Brothers versus Public Enemy that goes all over the arena and features a rare sighting of blood on a WCW program. 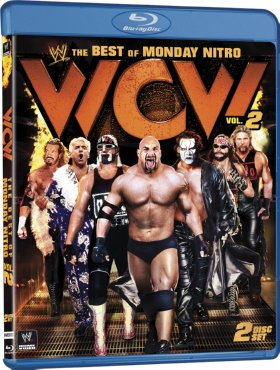 Of course, no collection showing the Best of WCW Monday Nitro would be complete without some of the infamous moments in the history of the program and Volume 2 is no exception. Included is Madusa’s trashing of the WWE Women’s Championship and the very short match between Rey Mysterio and Kevin Nash. The birth of the NWO Wolfpack is also featured during which you can clearly see how it confused the crowd somewhat and was an early indication of some of the problems the angle would face later on. Jericho’s confrontation with Goldberg is featured as well.

In addition to the aforementioned Public Enemy and Raven matches, the most hardcore matches featured in Volume 2 are a 1999 ladder match between Scott Hall and Bam Bam Bigelow and a 2000 House of Pain match putting Sting versus Vampiro. By 1999 WCW had a habit of having a massive amount of outside interference and screw job finishes for a lot of their matches and this does manifest in a lot of the matches from this period and later. There is also from 1999 the last World Title match between Randy Savage and Hulk Hogan, which, while nowhere near the quality of their earlier matches was interesting from a historical perspective.

Additionally there is also a handicap match from 1999 with Perry Saturn against Diamond Dallas Page and Bam Bam Bigelow for the WCW World Tag Team Championship, a WCW U.S. Title match pitting Bret Hart against Roddy Piper, and a match for the World Heavyweight Championship between Booker T and Scott Steiner from the last WCW Monday Nitro program.

The collection also contains some short features on Spring Break, Nitro Parties and the Nitro Girls which gives viewers an idea of the diversity of the WCW Monday Nitro program and also how popular it was at its height. Once again Diamond Dallas Page is the host for WCW The Best of WCW Monday Nitro Volume 2 and does an effective job of informing the viewer of what was happening in WCW as you move down through the years. Page also talks a bit about what Randy Savage meant to him which is very touching.

What’s been written here is only a partial listing of the quality matches and materials featured in WCW The Best of Monday Nitro Volume 2 and while it doesn’t feature every match or feud that I would have liked it is an extremely strong release from WWE. With any luck there’ll be a Volume 3 somewhere down the road!

THE BLU-RAY
For this review the DVD version of WCW The Best of Monday Nitro was used. The Blu-Ray version contains the following additional extras:

Memories on Best of Nitro both good and bad