Mat Matters: One of the ‘Lost Boys’ returns

When one declares himself (or herself) to be a wrestling fan, they do so with the full knowledge of being labelled as a “Lost Boy.”

You remember the term — berthed from Peter Pan, the Lost Boys were young lads who in and around their infancy fell from their trams and were whisked away to Neverland with the promise to never grow up. 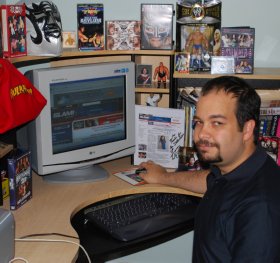 Jon Waldman works hard on SLAM! Wrestling: Shocking Stories from the Squared Circle, the book he co-edited which collects some of the site’s best work.

For the majority of my teenage years I was a Lost Boy. Though most of my friends, even in the Attitude Era, had long passed over the time when they would watch Monday Night Raw or even consider ordering a pay-per-view, I continued watching and studying wrestling. There was something so addictive about it.

But as my mind matured, the Lost Boy started to fade. I became less the child who could watch the drama unfold and I began to analyze more than view, the same way, say, a hockey scout picks apart a player’s game rather than watching the full contest.

The drama of Shawn Michaels vs. Bret Hart, even at the height of the Montreal Screwjob, came second to watching Dean Malenko or Chris Benoit execute a masterful match which met my now high criteria for an enjoyable match. To this day, I can’t watch the Attitude Era matches without thinking “these angles suck.” (And yes, they really did. Pull back the skinshow and chairshot layers of the onion and you’ll see that the TV wasn’t really that compelling.)

Even more influential was the day I joined the Internet Wrestling Community. In and around the time of that Screwjob I started going on wrestling dirtsheet websites like Scoops Wrestling, 1wrestling and Wrestleline. This, of course, was a time before the Wrestling Observer was online and the Pro Wrestling Torch was still primarily a paper mailout. This was a world I hadn’t been exposed to before — I never dreamed of reading anything but an Apter mag or the occasional WWF Magazine.

But the dirt sheets pushed that Lost Boy away. Suddenly, I was more interested in when Brian Adams was jumping to WCW or the WWF than watching his matches (yes, I’ll admit to being a Crush fan when I was a kid).

The Lost Boy got dealt an even harder blow a couple years later when I started my Internet wrestling writing career with Scoops. Suddenly, I wasn’t just a dirtsheet reader; I was a dirtsheet contributor. While I stayed honest in my work, culling real headlines for stories or reporting on what happened on TV with historical analysis built in, I was now becoming a grown up in wrestling.

What hid the Lost Boy forever was the next stage. When I officially joined SLAM! Wrestling, I almost instantly got the opportunity to not only report on my heroes, but talk to them. Chris Jericho, Shawn Michaels, Steve Austin, Trish Stratus, Kurt Angle… yep, I was sitting high in the saddle, doing what every child wanted — to be able to meet their TV heroes.

Riding that crest has been incredible. Outside of a scant few wrestlers, I’ve pretty much interviewed anyone I’ve ever wanted to (and for those curious, the ones still on my hitlist are CM Punk, AJ Styles, Paul Heyman, Vince McMahon, Stephanie McMahon, Edge and Lita). Being a part of the SLAM! Wrestling book only pushed this further – taking my passion for writing and telling stories into the ultimate print form was incredible, as has been other projects I’ve been involved in.

It was somewhere around the time that I completed my latest (and perhaps last) interview with Chris Jericho that I really saw my attitude towards being a wrestling reporter turn. It happens no matter which area you work in or which beat you cover; you do the interviews often enough that you start to look back and say to yourself “here we go again.” This isn’t the fault of the wrestlers, nor the fault of being in the position I’m in at SLAM! Wrestling (which I’m forever indebted to Greg Oliver and the Johns, Powell and Molinaro, for); it’s the reality of being here for a decade plus.

For those who know my work and the time and dedication I’ve put into SLAM! Wrestling, it probably seemed odd that I didn’t appear much on the site (not to be egotistical). By the time my decennial rolled around I was exhausted on wrestling. I would routinely miss watching TV shows and felt I couldn’t properly do PPV previews, something I used to love doing, and opportunities to do interviews with talent didn’t appeal to me much.

So what did I do when the burnout happened? I went to YouTube, and man, that has been the single best tool a recovering wrestleholic can ever have.

Here’s the reality of YouTube — WWE, TNA, RoH and whomever else can block as much content as they want but for every clip they demand be pulled, five more spawn up on the video sharing site. I probably watched Bryan Danielson vs. John Cena (the original match) a dozen times, while watching highlight clips of Mistico, KENTA, The Great Muta and Rey Mysterio ad nauseum.

Essentially, YouTube brought back that Lost Boy. I was now no longer having to analyze Raw and Impact with a set of predictions in mind. Instead, I was literally sitting in front of my computer screen and for hours on end watching what I wanted to watch, when I wanted to watch it. Botch-a-Mania? Please sir, may I have some more? Kurt Angle vs. AJ? Can I get a side of Fallen Angel with that? Daniel Bryan vs. CM Punk in Ring of Honor? YES! YES! YES! 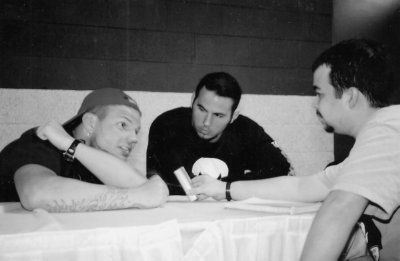 So now I sit at interesting juncture. I’m now essentially in my 12th year at SLAM! Wrestling, and am finding myself reinvigorated. Sure, WWE programming isn’t what it was, nor is Impact (thank God), but it’s somehow fresh to me. Maybe the mass retirements over the last couple years have forced this, but I’m now finding myself excited to sit down to Raw again while Impact is a TiVO must (Smackdown I can give or take though; it’s never going to be what it was when Guerrero and Benoit were alive).

More than that, the Lost Boy and the adult are now able to co-exist. They can sit on the couch together and look at a match purely for enjoyment without saying, “Ah crap, here comes Cena’s five signatures again.”

So what does that mean for my contributions at SLAM! Wrestling? Well, first off it means a return to the PPV, and you’ll see the Lost Boy there more often. I’ll still do the occasional interview (especially if the above listed personalities are ever available on the other end of a phone call), but you’re more likely to see me do these sorts of commentaries than hardcore journalism.

And you’ll definitely be seeing a lot more of the Lost Boy.

Jon Waldman is a SLAM! Wrestling veteran dating back to the original days of the “before times”. A multi-time author, Jon’s next book, on the history of hockey, is due out in September 2013.