Mania Moments: No. 1 – The Irresistible Force Meeting The Immovable Object 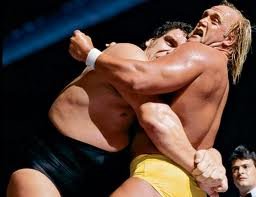 No. 1 – The Irresistible Force Meeting The Immovable Object

The World Wrestling Federation Heavyweight Championship was on the line when Andre the Giant defended the title against long-time champion and former best friend Hulk Hogan in the main event of WrestleMania III in one of the most iconic matches in the history of the sport.

Hogan landed some punches early and went immediately to slam Andre but crushed under the weight of the giant and almost had his shoulders pinned to the mat for three. Andre took over from there.

Hogan, though, would get going and try to topple the mighty giant, but ran into a big boot. They would end up on the outside for a bit before they came back in the ring. Hogan stepped out of the way of a big boot and shoulder tackled Andre to the ground and started to Hulk Up. He walked over to Andre and slammed him.

“I don’t believe it!” Ventura exclaimed.

Hogan followed up with the vaunted leg drop to retain his title.

“I never thought it could be done, Gorilla,” Ventura added.

Nobody is going to mistake this for anything close to a technical masterpiece, but for my money, Hogan slamming Andre is the most iconic moment in WrestleMania history. The attendance figure is certainly disputed, but the actual number is still the biggest crowd in WWE history. The moment, the iconic nature of it and the event it happened at it, make this, without a doubt, the sure-fire No. 1 WrestleMania moment ever.

In making this list, I was going through all the WrestleManias and trying to figure out what should be included (and it’s here I need to admit I made a big omission when I did not include Edge spearing Mick Foley through a flaming table). WIthout even thinking, I was able to put Hogan slamming Andre at No. 1. Even after going through everything I compiled, it stayed at No. 1.

Thanks for joining me on this countdown everyone as we relived some of the greatest moments in professional wrestling history.