Throughout North America, both of the top two wrestling organizations, World Wrestling Entertainment and Total Non-stop Action Wrestling broadcast their flagship shows Monday Night Raw and Impact to millions of people each week.

Across the pond in the United Kingdom, it is a completely different story, as it is unheard of for a wrestling show to achieve such numbers. However, that may be about to change, with the recent announcement that TNA Wrestling’s new TV deal would see the company broadcast on free-to-view TV, marking the first time since early 2001, that wrestling has featured on free television in the UK. 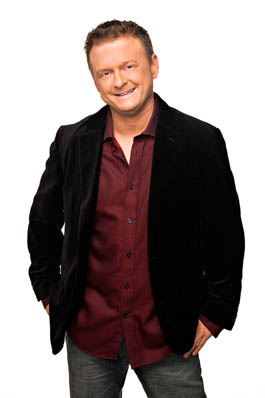 “The move to Challenge TV now means that we can be seen in 90% of homes in the UK,” TNA Wrestling’s Director of digital media, Jeremy Borash told SLAM! Wrestling. “When the deal was announced that we would be moving to Challenge, I was so excited because I knew that we were going to be on Freeview, the amount of homes we can reach on there is amazing.

“We now have the opportunity to gain so many new fans; loads of people will discover TNA for the first time.”

TNA were previously shown on Bravo (a part of the Sky satellite network subscription service) but the deal with them ended on New Year’s Day when the station ceased broadcasting, leaving TNA without a home.

Borash believes it was the UK fans of TNA, which got the company back on TV after a short hiatus.

“The fans saved our TV deal here in the UK, simple as that,” Borash explained. “They spoke up and made it known that they wanted TNA wrestling on their TVs. So when I say our fans saved the TV deal in the UK, that’s 100% true.

“We were disappointed about Bravo closing, but it didn’t take long for our fans to speak up. I believe everything happens for a reason and Bravo’s closing has worked in our favour.”

The move to Freeview Television is one that has invoked memories of the glory days of British wrestling in the 1970s and ’80s, when ITV (one of the major broadcasters on Freeview TV) would broadcast World of Sport, which featured such greats as Big Daddy and Giant Haystacks .

Since debuting on Challenge there is no doubt that the move has been a successful one, with the company becoming the number-one rated show on the station.

In addition to this Impact has also been drawing more viewers than WWE’s flagship show Monday Night Raw. Though it must be noted that to watch WWE in the UK is harder to come by, as unless you are willing to pay for Sky Sports (a part of the Sky satellite TV subscription) which hosts WWE programming you won’t be able to view their shows.

The UK is in fact the only region where TNA does garner more ratings than WWE.

“It feels good to beat the competition,” said Borash. “But we don’t live and die by the numbers like it may have been 10 years ago. This is because there are so many other outlets and revenue streams for our company, but obviously television is most important. To be able to pull the numbers we are currently getting in the UK is a big deal, it’s important and we couldn’t be happier with the ratings.”

TNA’s recent tour of the UK in January is also a testament to the popularity of the company, with their final show at the Wembley Arena in London drawing over 9,000 fans. An attendance that is one of the company’s highest ever.

Borash, who has been to the UK no less than three times since the turn of the year, believes that TNA’s growth in the UK is a pivotal factor in the growth of the company overall.

“The success we have had over in the UK speaks volumes to other parts of the world. The fan base here in the UK is honestly second to none. All the guys in TNA say going on tour to the UK is their favourite tour of the year; we go a lot of places so for them to say that is great.

“They look forward to coming over here to perform because of the fans enthusiasm. Most people say the fans in the UK are so passionate and enthusiastic because they are starved for wrestling, no they’re not starved for it, that’s wrong they just know good wrestling and they will show you how much they appreciate it. 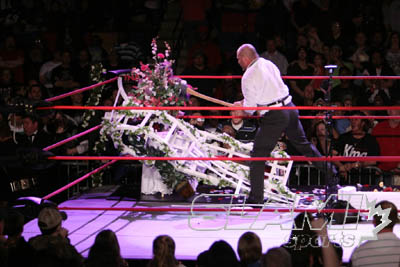 Kurt Angle goes a little crazy at the TNA taping in Fayetteville. Photo by George Tahinos.

Recently TNA taped their television show in Fayetteville, North Carolina at Crown Coliseum. Taking Impact on the road instead of being taped at the Impact zone in Florida is a step that Borash believes the company needs to take more often.

“Doing that show in Fayetteville gave the show a real different look. We realize that we need to take Impact on the road, not only did the entire night go smoothly from a production stand point but everyone left the arena high fiving each other because we were proud we had done this.

“I love being in front of different crowds, the atmosphere is fantastic, hopefully down the line there will be more shows out of the Impact Zone. Who knows maybe one day we can tape a show in the UK?

“If I was in charge of TNA, I would move the whole company there [to the UK] in a heartbeat. Because of the fan base, because of their enthusiasm, I mean the fan base there is made for wrestling. I would love to perform in front of those fans every week and it would be a better TV product for it. But of course it’s not up to me.

“Doing a TV taping in the UK is something that is on our agenda. I can assure you that taking TNA out of the Impact Zone more regularly is on our list of things to do.”