During TNA’s infancy, Lance Hoyt was a major part of the then Nashville-based promotion. Brought in to the company in early 2004, he originally wrestled under the name Dallas portrayed as a relative of Kid Kash. Together they became two-time NWA tag team champions, with Hoyt gaining his first championship just a week after he signed his TNA contract.

For the next five years, Hoyt would be involved in some memorable storylines in the early stages of the company’s history, his “Hoytamania” gimmick and stint as one half of the popular Rock ‘n’ Rave infection tag team with Jimmy Rave were highlights in his TNA wrestling career. 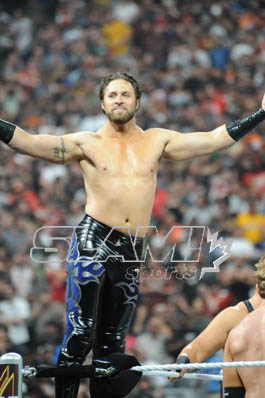 Vance Archer in the ring at WrestleMania 26 for the pre-show battle royal. Photo by Mike Mastrandrea

In early 2009, he was released from his TNA contract. While upset with their decision, he had the belief that he could move onto bigger things. It wasn’t long before he was snapped up by WWE in April of that same year.

“Of course I was disappointed when [TNA] released me,” Hoyt told SLAM! Wrestling. “I believed I could have been a big player for TNA if allowed to be. But when I was released I was confident in going to WWE because I knew what I had to offer.

“I already had an idea what was going to happen and I was in contact with [WWE] as soon as I could be.”

The 33-year-old Texan recalls his feelings of the moment WWE called him. “I was at home and it was a very exciting time for me and such an incredible feeling. I had a lot of hopes for the future at that point.

“I was excited to be getting the chance to be in WWE, it was great to know they believed in me.”

With WWE being the biggest wrestling company in the world there has always been a tremendous amount of competition for spots within the promotion and for many the idea of becoming a part of the Stamford, Conn.-based group would be a daunting experience.

But for Hoyt, he took everything in his stride. Since the moment he became idolised with “The Icon” Sting back in 1994, he has always wanted to become a major star and work on the grandest stage available.

“I have always been a fan of the athleticism and the acting involved in the business. When I entered WWE I was never worried about the competition from within, you have to have the confidence that you are the man and I believed I was the man.”

Hoyt was soon assigned to Florida Championship Wrestling; it was at WWE’s training facility that he started to learn the valuable skills needed to assist his mission in becoming a WWE superstar.

“The training at FCW was awesome,” Hoyt recalled. “The trainers were amazing and I learned a lot about the business and how to work in WWE. They helped me in every aspect of the business. In-ring skill, technique, psychology of the business, promo skills, appearance and backstage etiquette.

“They show you everything that can help make one successful in the WWE; the company is about entertainment not just wrestling in the ring anymore.”

Impressing at FCW, it was only a matter of months until he was promoted to the main roster, making his in-ring debut as part of the ECW brand in November 2009.

Before his start on ECW, WWE decided to tweak his in ring name. While there were several name choices, Hoyt alongside WWE, came up with the name Vance Archer.

While Vance was chosen because it is similar to his real name, Archer was decided upon because that is the name of his father; this meant something to Hoyt and really hit home that by having this name it was something to make his family proud.

After a few weeks on ECW, he entered into feuds with two former WWE superstars, Tommy Dreamer and Shelton Benjamin. Hoyt looks back on these feuds with fondness and realizes that both taught him a lot, but believes his feud with Benjamin could have been built more.

“I was surprised when WWE called me up to ECW so soon, but not shocked. I loved having the opportunity to debut on ECW, it gave me my chance. Dreamer was a dream to work with. He is awesome and I learned a ton from him.

“Shelton and I had a good feud and some good matches but it was cut short by the ending of ECW. When that brand [ECW] ended, I wasn’t worried for my spot; I just knew that it would take some time to get back in the groove of things.”

It wasn’t long before Hoyt made his WrestleMania debut earlier this year in front of over 72,000 fans in Phoenix, Arizona. He competed in the 26-man battle royal which was staged just before the event went live on pay-per-view. The match at WrestleMania was an experience that Hoyt will never forget and one that he would love the chance to enjoy once again.

“It was awesome, by far my most memorable experience. Getting to go out there, down that ramp, step through those ropes, stand on that corner and perform in front of the WWE universe at Mania was just awesome.

Curt Hawkins was paired with Hoyt and the two became an efficient tag team on the Smackdown brand. While these two were showing promise as a team, that their run was stopped short by WWE. Hoyt believes that if they had been kept together they could have been successful.

He was booked to turn on Hawkins and it seemed the two would be entering into a feud; however this was not the case. Hoyt again believes WWE missed out on something that could have been successful if given the chance.

“For me it was a budgetary decision that was what was told to me,” explained Hoyt. “I was obviously disappointed and felt WWE was making a mistake. 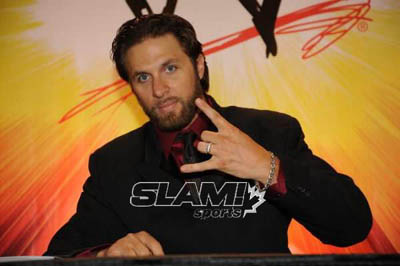 “They dropped the ball by releasing me; I only regret not pushing the right people harder for more.

“I am looking to hone my craft on the indy scene; [independent shows] can be a lot of fun. It hasn’t been that hard to get back into taking bookings because I know a lot of people from my time before WWE and have re-kindled those relationships.

“I am just trying to do as many good and big things as possible [on the indy scene] to keep people thinking about me until I can return to a big time promotion.”

Looking to the future there is no doubt that Hoyt still believes he can be a major force in the WWE if given more of an opportunity to shine.

“I simply believe that I am that star that WWE is looking for.

“But in this business you have to be put in the right spotlight for that to be recognized. Give me that spotlight and you won’t be able to look away.

“I will get back [to WWE] and I will be a star. It’s never a good feeling when leaving your dream job. But I will be back.”