Since the formation of professional wrestling in the early 19th century from American carnivals, promoters have strived to contrive weird and wonderful ideas in an attempt to gain attention from potential audiences. 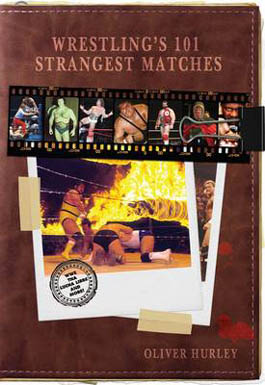 Wrestling journalist, Oliver Hurley, who has an extensive and varied background working for publications such as Total Guitar and Power Slam magazine, attempts to chronicle the wackiest and craziest moments in sports entertainment for his new book Wrestling’s 101 Strangest Matches.

“I wanted to write a book that was fun and accessible, appealing to both casual and more dedicated wrestling fans,” stated Hurley. “A lot of wrestling books can be quite po-faced but watching wrestling is meant to be entertaining and I wanted the book to reflect that.”

The first thing that struck me is how extremely easy it is to read this book, with stories categorized into multiple sections. Each section detailing a number of tales which include a host of different occurrences, from situations that “weren’t meant to happen” to accounts of contests that had “extreme blood and violence.”Each individual story is kept short. With a small, brief but very detailed explanation of how the “strange” situation came to ahead. This helped, as I constantly found myself being able to dip in and out of the book, easily picking it up and reading a brand new story each time.

There are some stories that wrestling fans will instantly know: Mick Foley’s ear loss in Munich after getting his head stuck in the ropes against Vader, and Vince McMahon injuring his quadriceps muscle while entering the ring at the culmination of the 2005 Royal Rumble main event.

But there are tons of stories that unless you are a walking wrestling encyclopaedia you would be hard pressed to know. The story of Freddie Blassie whose actions in a match taking place in Japan, caused some TV viewers to suffer fatal heart attacks. Or the lesser-known tale of Lance Steel against Darkness Crabtree which was a match that lasted 24 hours.

It’s obvious that the detailed explanations have been written in order to cater to fans with all varying degrees of knowledge for the wrestling business. This format has certainly been chosen to appeal to people who may not be that familiar with the matches or participants as well as the “smart” wrestling fan.

If you have been a fan for a long period of time though, admittedly it can sometimes be a little annoying when having match types or wrestling moves explained. But it’s understandable though that the book has been catered to the largest potential audience possible.

During this book, Hurley constantly had me in fits of laughing and sometimes even squirming at the stories being told. Including one story of Andre the Giant losing control of his bowels during a match and masked villain Kendo Nagasaki “hypnotizing” his opponent during a match.He should be applauded for the varying levels of the tales told, the research done for this book is fantastic and there are definitely quite a few of the stories featured which will have readers clamoring to do their own research to find out more.

All eras are covered as well, from the early 20th century all the way up to present day. There truly are not many publications out there that would cover as many different wrestling promotions and include as many names from all over the world — Steve Austin, Atsushi Onita, Strangler Lewis, Brock Lesnar, El Santo, Kendo Nagasaki, Gorgeous George, and even a break dancing wrestling robot gets a mention.

“It was very important to me that the book was diligently researched,” Hurley continued. “Even though the tone is fairly jocular, I tried to cram in as much information and detail as possible.”

Overall, I found Wrestling’s 101 Strangest Matches hugely entertaining, really insightful, and a nice addition to any wrestling fans book collection. The length is worry though, with just under 200 pages it is a little light and a more advanced reader should be able to polish it off rather quickly.

Note that it is a release from Pitch Publishing Ltd. in the United Kingdom, and readers in North America will have to seek it out through international sources, such as Amazon.co.uk.

DARREN WOOD is a freelance journalist in the United Kingdom currently working as UK Features Editor for free online magazine The Wrestling Press.