WWE’s newest pay-per-view carries a unique format that has left many people guessing as to who will be wearing the gold at the end of the night.

Fatal-Four-Way takes place Sunday, and with three opponents, each title holder will be entering the ring with more risk of losing their titles than usual.

Among those champs who put their coveted straps on the line is Eve Torres, one of WWE’s most popular female competitors. Eve, who’s been the Divas champ for a few months, squares off against fellow Raw vixens Maryse, Alicia Fox and Gail Kim. 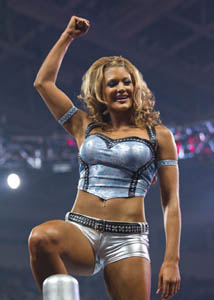 For Eve, this is the first time she will compete against three other Divas in a single bout, meaning that her mindset going in will be a little bit different than usual.

“I have to be a little bit smarter than in a normal match,” she told SLAM! in a June 17 interview. “There’s more strategy and you have to know your physical abilities.”

Perhaps the most intriguing element of the matchup will be the inevitable square-off between Even and Gail, two competitors who as recently as Monday have been seen primarily teaming alongside each other. This will be a rare opportunity for the two extremely athletic and creatively-minded Divas.

“She’s a very strong competitor. She brings a lot to the table,” Eve says of her friend-turned-foe.

Fans will also be treated to more in-ring action between Eve and Maryse, who have butted heads on several occasions on Raw. This familiarity has bred some of Eve’s favourite matches, as their in-ring personalities have played off one another.

“She’s a real character,” Eve says with a laugh, “Her, for lack of a better word ‘bitchyness’, has really brought out my desire to stay champion and it’s helped me come into my own in the ring and let everyone out there know who the title belongs to. I’ve had some really great matches with her and I do enjoy working with her, as crazy and as egocentric as she is.”

The match on Sunday will also present a unique opportunity for all four of the Raw Divas. As of the time of this writing, there has been no Women’s title bout announced, giving the Monday night femme fatales the spotlight for WWE Diva competition.

“It’s a great opportunity,” Eve remarks. “The pay-per-views are something we all desire to do. It means a lot to us and to the Raw brand.”

Torres noted that while the Friday night ladies aren’t at Fatal Four Way, they’ll have their chance to shine as well. “Everyone gets their time. Smackdown will have their time to have a pay-per-view match as well, but it’s the Diva’s championship on Sunday.”

Sunday’s battle will wrap up what has been a very eventful week for Eve. Along with the aforementioned tag match on Raw, Eve was also at E3 this past week to help promote the next WWE video game, Smackdown vs. Raw 2011. The exhibition has become known as the electronics show for gamers, and Eve was excited to be one of the first to try out the new WWE title, which hits stores in October.

“I got to play a bit of the new game – a sample version. It’s frickin’ awesome!” she says.