Masao Kimura, who was known in Japan as Rusher Kimura and in North America as The Great Kimura or Mr. Toyo, died earlier today in Japan of pneumonia, after complications of kidney failure. He was 68. Pro Wrestling NOAH, the last promotion he worked for, will have a ten bell salute for him at tomorrow’s show. 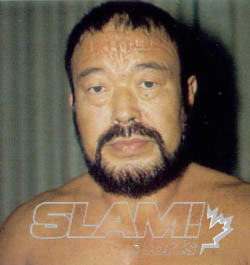 Kimura was one of the dominant names in Japan during the 1970s. One of the top names of the International Wrestling Enterprise (IWE), Kimura would journey through numerous Japan promotions, including being one of the founding members of the Universal Wrestling Federation (UWF) in 1984. He became known for wrestling the first cage match in Japan but also for his microphone skills, a skill unused in Japan until he used it.

Tiger Jeet Singh, who teamed with Kimura in Japan on numerous occasions, told SLAM! Wrestling, “He was such a super human being. It’s so sad.”

Kimura would gain his greatest fame working IWE from 1967 until the promotion closed in 1981. IWE was the first promotion to make deals with promotions in other countries for talent. The group would be the first to bring Andre the Giant, then known as Monster Roussimouff, from Europe. The group would also sign a deal with the American Wrestling Association (AWA) in the United States. Kimura only made a few trips to the United States during his career, but would often wrestle Verne Gagne, Billy Robinson, Superstar Billy Graham and others in Japan.

In 1970, Kimura would earn the name “Master of the Steel Cage,” after defeating Moose “Dr. Death” Morowski in Japan’s first cage match.

“At that time, he was the number one guy with International,” recalled Morowski, adding that Kimura was “Americanized,” meaning that he could work with the gaijins and could speak pretty good English.

The cage match in Osaka was a career highlight for Morowski. “It was a new thing. It was real exciting because it was the first cage match,” he said. He was the superstar at that time. We had a hell of a match. I put him over and everything. He was real happy. … He got good publicity out of it.”

The IWE promotion was the first to introduce an edgier, death match style that became huge in the country during the 1990s. IWE would often run no-DQ, Indian strap and cage matches, contrary to what other promotions were doing at the time. The promotion was also the first in Japan to popularize musical entrances. 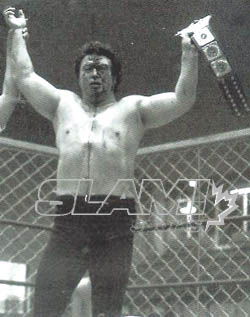 A bloody Kimura in a steel cage in the IWE. Photo by Mike Lano, [email protected]

Teamed often with Great Kusatsu, Kimura would capture tag team gold in the IWE, Europe and the United States. He would also have great success as a single, capturing the IWE World Heavyweight title five times including a win over Verne Gagne on November 13, 1979. He would be the last person to hold the title, as the promotion ultimately closed in September 1981. He would also win IWE’s major singles tournament in 1973, 1977 and 1978.

Giant Baba would use Kimura starting with the first All Japan Real World Tag League in 1977. Kimura and Great Kusatsu would come in fourth place, the highest of any non-regular All Japan team. Baba would team with Kimura in 1984, 1988 and 1989. The team finished third twice.

When the IWE closed in 1981, Kimura and others would find work for New Japan Pro Wrestling. Kimura was often stuck as a midcarder which caused frustration during his time with the promotion. One highlight of his time with New Japan would be in February 1984, when just two weeks after winning the WWE World title, Hulk Hogan and Kimura wrestled twice, one ending in a double countout while the other ending with a disqualification win for Hogan.

Singh said Kimura was valuable in other ways, and that they went to many parties together, in particular for sponsors. Kimura would offer Singh advice on which of the dozen or so sponsors they should visit with after the shows.

“He loved his drinks,” recalled Singh. “He was a good singer, too. He used to sing karaoke. We used to watch him and enjoy it. He was a happy, happy, happy old boy.”

In the summer of 1984, a group of New Japan wrestlers, led by Akira Maeda, would form the UWF. The promotion would mix a more shoot-style in wrestling. Although the promotion would last under two years, the style would affect professional wrestling until this day.

When looking for work in 1984, Giant Baba offered him a job for All Japan. It was with All Japan that Kimura was able to really his microphone skills. He was older and slower, but his persona, along with friendship with Baba, gave him consistent work until his retirement in July 2004.

Kimura would be among those who in 2000, left All Japan in 2000, to form Pro Wrestling NOAH. Kimura was often grouped with other older wrestler in the first match of shows. The matches were often slower, more comedic, but also gave Kimura the opportunity to entertain the fans after the match by grabbing the microphone.