Cena and ‘Psych’ team up for Raw and season premiere

It’s a you-scratch-my-back, I’ll-scratch-yours world this week in WWE, as Psych stars James Roday and Dulé Hill co-host Raw, and John Cena appears on the season premiere of the show on Wednesday. Cena and Roday talked about the synergy. 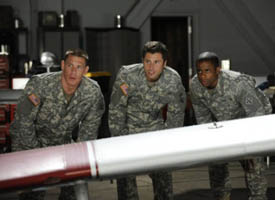 During a conference call last week, Cena revealed that Roday and Hill were wrestling fans.

“Dulé’s energy is second to none and James, believe it or not, whether you’re going to get him to admit this online on the phone is one of the biggest closet wrestling fans I have ever come across in my life,” Cena explained. “There are many intricate professional wrestling references in the kick off Psych episode. It’s, it was a pleasure to see and those guys paid homage to the sport and to the industry fantastic, fantastically well with their clever way of writing material.”

Roday was a little taken aback that he’d been outed — though he actually quoted Jesse Ventura’s “Win if you can, lose if you must but always, always cheat” line during the call.

“First of all the whole point of being a closet fan of anything is that people aren’t supposed to then out you and say that you’re closet fans of stuff,” he said, launching into a brash wrestling character.

“I’m going to have to beat John’s ass,” he joked. “This is my fear and I think it’s legitimate. I go into the ring on like a one-off deal guest hosting Raw or whatever, I flash some stuff, and I know I have and know I’ve had since I was a kid, all of the sudden there’s a conflict of interest because Raw wants me to join the roster.”

The USA Network criminal comedy-drama Psych has been on the air since July 2006, and was the highest-rated U.S. basic cable television premiere of 2006. The fourth season debuts this Wednesday, with Roday portraying Shawn Spencer, a “psychic detective” with the Santa Barbara Police Department, and Hill as Burton “Gus” Guster, Shawn’s best friend and business partner.

Cena admitted he hadn’t seen that much of Psych before appearing on it.

“I’ve seen bits and pieces, I’ve never been involved and dedicated for the seasons and everything, but really kind of saw that it was my sense of humor and definitely when I got on set I knew I would fit right in,” Cena said. “The show’s very well written … I wasn’t a die-hard fan but have since become one.”