Posed with the question as to the legacy of the great Stu Hart, most fans of modern professional wrestling would no doubt suggest that it is his role as the patriarch of the Hart family — which produced eight sons who all wrestled, and four daughters who all married wrestlers — that stands out as his greatest achievement. 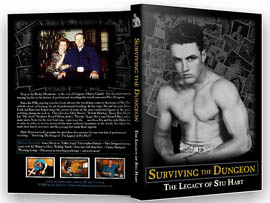 A proud family man, that’s a thought that was shared by Hart himself, but it is likewise the case that the life and career of the the former Canadian Navy enlistee stands up in its own right, even if his sons Bret and Owen are the most famous to bear the family name.

Attempting to shed some more light on the man himself is a new documentary entitled Surviving The Dungeon: The Legacy of Stu Hart, a DVD release conceived by long-time wrestling fan Blake Norton, who has also dabbled in almost every other aspect of the business, from promoting to commentating to training. The two-disc set goes beyond the doors of the Hart House, allowing the viewer to get to know Stu through his own anecdotes, some of the last “stretching” he ever performed on the mat, and the words of those who knew him best, such as his wife Helen, sons Bruce and Ross, and daughter Georgia.

The footage was shot mostly in 2000, on the second of three trips that Norton — who now resides in Ireland — made to the family home in Calgary. Recorded on a Mini-DV camcorder, some of the footage is well below DVD standard, but as Ross Hart himself pointed out to the filmmaker, that only adds to the intimate, “home movie” feel of the production. For any moments where the audio isn’t as clear as you might expect, subtitles are provided, so there’s no straining at those hard-to-hear moments.

Despite the problems with some of this interview footage, amends are somewhat made with the excellent clips from the Stampede Wrestling archives, not to mention such fabulous photos from the quite incredible collection of Bob Leonard. Much like the Forever Hardcore documentary as opposed to the WWE’s Rise and Fall of ECW, Surviving The Dungeon actually benefits from the still photo approach, giving the piece a wonderful sense of history of not only Hart, but the Stampede territory that he ran as well.

The content itself finds Stu in excellent humour, but also in good memory. He certainly has not forgotten the holds for which he became famous — it’s often been said that to shake Stu’s hand was a mere invitation for him to stretch you — and takes the opportunity to utilize them on Norton, who despite the pain, describes it as great experience because he got to learn the way that Stu himself learned. As it happens, there’s enough of a look at those holds to give some brief lessons in catch wrestling techniques, which may even be adaptable to MMA.

Showing the softer side of the man, the charming tale of Stu and Helen’s courtship is told, but the sentimentality inevitably takes a back seat instead to document Hart’s love of wrestling. Of particular note is his pride at teaching his sons, and those other competitors that he saw become greats in the business, like Brian Pillman and Chris Benoit.

The manner in which he taught second-eldest son Bruce — and how the legend of training in the Dungeon has continued to live on — takes precedence towards the end of the documentary, with a great music video of several students training in that unlikely setting. It’s a real eye-opener to the uninitiated as to how difficult the art of professional wrestling really is to perform, although admittedly, the DVD does include the extra of mid-teens Harry Smith and TJ Wilson (now Tyson Kidd) making it look much easier than any of the other students.

Within that same extras discs are added anecdotes — including the odd-sounding Stu Hart tale of the tiger and the water buffalo — and several matches including Bruce Hart vs The Dynamite Kid (1980) and Lance Storm vs Christopher Daniels (2001). With this mix of wrestling, training footage, and interview footage of the man and those who knew him best, Surviving The Dungeon makes excellent viewing for anyone who’s interested in the life of Stu Hart, his own legacy in the wrestling business, or how the competitors that he influenced over the course of his illustrious 88 years.

EDITOR’S NOTE: We’ll have an interview with Blake Norton in the coming weeks.