It may seem audacious for an indy wrestler to cut a two-disc retrospective DVD highlighting his career. Somehow, Jason Maschke — a.k.a Jason Cage — is able to pull it off.

Cage is a relatively well-known worker on the Ontario circuit. He is probably remembered most by wrestling fans for suffering a near fatal injury after WWE tryouts in Ottawa in 2006. After doing too many Hindu squats, Cage found himself in a Kingston hospital a few days later. The doctors diagnosed him with rhabdomyolysis which meant he had overexerted his body to the point where the muscles were breaking down. A side effect is that proteins are released into the body leading to possible kidney failure. 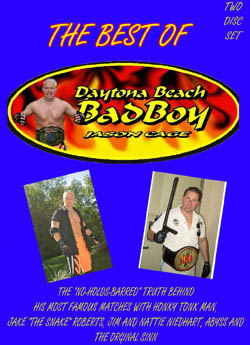 Cage dwells only briefly on the DVD about his WWE ordeal. It is like he is trying to put the whole affair behind him and generate media attention based on his current career.

The DVD is comprised of two parts. The first DVD covers Cage’s matches from his debut until his recent return. Cage has only been wrestling for about five years. Many indy wrestlers would have difficulty putting out a decent retrospective after working 25 years. During his brief career, Cage has wrestled top Ontario indy guys, including Quinson Valentino, and old school legends like The Honky Tonk Man and Jake “The Snake” Roberts.

An interesting feature of the matches is that Cage does a shoot style interview revealing his thoughts and funny background stories before the match. Fans get an inside perspective what goes on behind the curtain before a bout. Some anecdotal information includes Honky Tonk Man always has vodka in his Gatorade and has a propensity to eat day-old fast food.

Perhaps the most amusing story involves Cage travelling with Abyss across the Canadian-American border. This is after September 11th and the tight border restrictions. A 6-foot-8, 350-pound monster in transit with a 5-foot-10, bleached blond pretty boy was sure to attract the attention of border guards. They were so convinced of being stopped that they mistook a toll booth clerk for a border guard. The ironic part is that Cage is a police officer as his day job in Kingston, Ontario, which he only briefly mentions on the DVD.

Cage is a decent wrestler and the calibre of the matches is quite good. He has a hard-hitting match with Abyss and there are also several excellent matches with Quinson Valentino. Unfortunately, some of the video quality is what you would expect from an independent wrestling show. A couple of the matches also feature commentary even though the audio is sometimes difficult to hear as well.

The second portion of the DVD features Cage extras ranging from funny road stories to shoots on the Ontario wrestling scene. Cage is a gifted storyteller and is well-spoken. An interesting moment comes when Cage mentions that one of his career highlights is being profiled on SLAM! Wrestling, with the story archived in the indy section of the Canadian Hall of Fame. Other extras include a photo montage and an interview with a local Kingston radio station promoting a match.

The only extra that may not be of interest to some wrestling fans is when Cage shoots on the Ontario indy scene and some of its wrestlers. This is entertaining if you have actually seen that particular wrestler perform, but would not appeal to a fan in Nova Scotia or B.C.

The Cage DVD has generated controversy on Ontario wrestling chat boards. Some wrestlers feel a retrospective DVD is self-aggrandizing while others probably don’t appreciate being on the butt-end of a shoot interview.

Most fans will find the DVD to be worth their money. The match quality is good and Cage does provide an entertaining and honest look at independent wrestling. This DVD will help fans understand the indy worker who may never wrestle in front of more than 500 fans or get a lucrative contract with WWE or TNA.