Last fall, the Iron Sheik was roasted in what was supposed to be a fun-filled evening at a New Jersey ballroom.

Well, if your idea of fun is curse words every 10 seconds and drunken rants by an uninvited guest, then you’ll enjoy Ring Roasts I – The Iron Sheik from Kayfabe Commentaries. 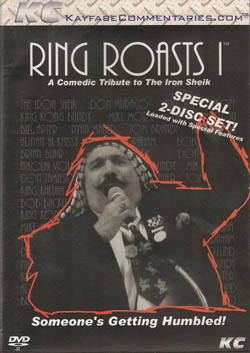 Bill Apter hosts the roast, contained on two discs, with Kayfabe Commentaries co-owner Sean Oliver, and Apter tries to be funny, but to no avail. Former wrestlers like King Kong Bundy, Nikolai Volkoff, Sheikh Adnan Alkaissy, Don Muraco, Bob Backlund, B. Brian Blair , Tom Brandi and King Kahlua make appearances, along with some comedians. Some are worth watching, some swear like crazy, some you fast-forward past.

The roast itself is nothing but expletive-laden tirades. Not funny. Some of the jokes directed at the roasters aren’t taken well, but the wrestlers feign a smile here and there.

When some comedian named Jimmy Graham took to the podium, he reportedly made an off-color remark about Owen Hart’s death and Scott Hall caused an uproar, but that was edited off this DVD for some reason. No sweat. I’m sure it’s on YouTube somewhere.

Volkoff tells a story of Sheik’s partying habits and it’s one that had Volkoff thinking he was having a heart attack. Volkoff also calls Sheik the best shooter in the business. I would tend to agree.

Much of the roast is marred in parts as rambunctious fans in the ballroom yell obscenities and seem to be heavily intoxicated. What a mess.

As Blair takes the mic, he says he enjoys the comedy, but not the tasteless jokes. But it’s hard to hear him at times because the drunkards in the crowd keep yelling for the Sheik to “humble him.” As Blair talks about the Sheik, the honoree looks peeved and not impressed — and Blair was praising him! Blair’s talk was the most decent, until he made note that the new Sheik action figure only bends forward and that the knees are calloused and that if he tied a ham sandwich to his back, the Sheik would starve. Nice. He also has no idea why the Sheik hates him with a passion and that he respects him. It appears the Sheik also refuses to shake Blair’s hand, too, but the camera shot was off.

Once the Sheik speaks, he’s a mess. He yells incoherently and keeps saying something about Jim Brunzell and Minnesota and has the crowd say “Hell yeah.” At the end, Sheik starts in on Blair again and Blair approaches the podium. He extends his hand again and eats a bitch slap from the Sheik. Blair oversells the slap as if he’s been punched by three different guys. Oliver then intervenes and separates Blair and the Sheik and, thankfully, the roast is over.

A second bonus disc has pre-show happenings, the Hall incident (a total gong show, yet he takes the mic and has the crowd say a prayer to Owen) that disrupts the show and continues for a while. I won’t go into detail because I don’t condone drunken shenanigans, but I do appreciate Hall going to bat for Owen. Once the cops come, well, it shouldn’t have come to that. There’s a video response from the Sheik tearing Hall a new you-know-what and I guess you can call that a bonus. Hall also gives a video response and just says he was angry over the Owen remark. It’s just a shame that Hall pretty much ruined the roast because his demons took over. Sad.

More on the Blair confrontation ends the bonus disc. Blair complains to Oliver that what happened wasn’t supposed to and that Oliver had guaranteed his safety in his contract. Oliver reiterates that all he wanted was a handshake between Blair and Sheik. Again, some guys don’t seem to know the boundary between real life and the pro wrestling life.

This DVD set is worth having, if for nothing else than to see the much-ballyhooed events between the Sheik and Blair and Graham and Hall. It’s also good to hear the old-timers, er, Legends, talk about the past. That always hits a soft spot for me