Reality TV meets women’s wrestling in a webcomic about a girls-only mega promotion.

Rival Angels, the name of the comic and its fictional WWE-like wrestling federation, centres around rookie Sabrina “Ultragirl” Mancini and her three roommates as they try to climb the pro ranks. It is a mix of storyline and kayfabe, for the wrestlers actually compete to win in the ring, and yet at the same time, the owner of the federation talks about who she wants to “push.”

“The story lines of pro wrestling but the reality of, for example, mixed martial arts,” explained creator and artist Alan Evans. “The description I like to use is, Reality TV meets women’s wrestling.”

“Really, the best parts of pro wrestling!”Evans, who lives and works out of Milwaukee, WI, said he has always been a fan of comic books, art and wrestling. Seeing a niche, he came up with his wrestling webcomic concept and put forth his first issue in December 2007.

“It just so happens that wrestling is woefully underused in comic book format and with my love of comic books, I thought that it would be a great way to fill that void,” he said.

Evans, who always uses the tag line “Rival Angels-The #1 Wrestling Webcomic,” said his claim is justified given the volume of work Rival Angels represents and the overall lack of wrestling comics on the Internet. His product is particularly original for it deals exclusively with lady wrestlers.

“I went with an all-girl league because I wanted to do something different both in pro wrestling and comic books. I felt that female protagonists would be more interesting and entertaining than their mainstream male counterparts.” 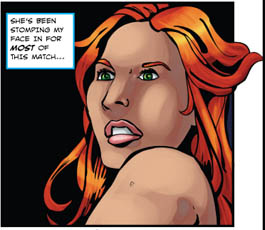 He said he went the web way rather than conventional comic book route because of the huge savings it represented. Evans estimated it would have cost him thousands to create a proper print run while also marketing his product. With this format, he is building an online following for his story, which he updates three times a week on Monday, Wednesday and Friday.

“If I would’ve done individual comic book issues, I would have broken them down similarly to the chapters I have online.”He recently completed his 200th page of Rival Angels, a work he produces by combining traditional and digital art.

“On the computer, I lay out my panels and rough in the character placement. I print that out in blue ink and do my penciling with a 3B lead and lead holder. After that, I scan it in my iMac and do any little fixes on the line art as well as colour and letter the page.”

He hopes to release a 132-page trade paperback this summer, and promised more stories and guest writers would be on the way.

“I’ve even got guest writers lined up like Justin Riley (Workshed Studio) and Lora Innes (IDW Publishing’s The Dreamer) in the future.”